Learning to live with climate change: the lessons from Los Angeles 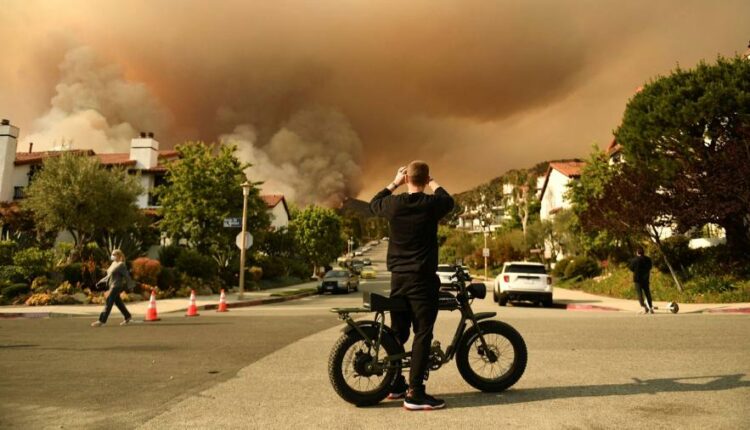 As the population of Los Angeles boomed in the early 20th century, William Mulholland had a realisation: the city’s climate was far too dry to provide enough water to support the grand metropolis he envisioned. So Mulholland, an Irish-born, self-taught engineer who ran Los Angeles’ water department, worked out a scheme with the city’s mayor to snatch the water rights away from rural Owens Valley, roughly 200 miles away. Water from Owens still flows into LA today.

Mulholland’s underhanded manoeuvring primed his adopted city for a century of growth, launched years of water wars and inspired the classic 1974 film Chinatown, but it did not solve Los Angeles’ fundamental water problem.

Today, with California suffering through another biblical summer of drought, rampaging fires and record-breaking heat, LA and the rest of the state is facing an acute water crisis. A host of emergency measures have come into force in recent weeks across California, with officials imposing restrictions on agricultural and residential water use.

But Eric Garcetti, LA’s mayor, has some big ideas about the city’s future water supply that Mulholland might admire for their ambition. LA still imports most of its water from places like Owens, but Garcetti hopes that the arid city will finally be able to source its own water — including as much as 70 per cent of its drinking water by 2035.

To do this, his administration plans to recycle all of its wastewater — water that is flushed down a toilet or sloshes down a drain — and capture stormwater. The city also hopes that a clean-up of groundwater basins in the San Fernando Valley that were polluted by Lockheed Martin and other manufacturers will produce 1.5bn gallons a year of clean drinking water. In all, developing the technology to recycle the city’s wastewater is expected to cost about $8bn.

The water plans are just one part of LA’s Green New Deal, a wide-ranging blueprint championed by Garcetti in 2019 to combat climate change and achieve net zero carbon emissions in the city by 2035.

The urgent need for such planning was underscored by the sweeping report released on Monday by the UN’s Intergovernmental Panel on Climate Change, which laid bare the overwhelming likelihood of the globe reaching 1.5C of warming within 20 years. A temperature rise of that size from pre-industrial levels, the report said, would wreak havoc worldwide and trigger “unprecedented” extreme weather events.

With every fraction of warming, the IPCC made clear, weather extremes will become more frequent and intense: in a 1.5C world, for example, a heatwave that would have occurred only once in 50 years before human-induced warming would likely happen nine times over the same period.

“The idea that the problem is accelerating faster than we thought validates what we feel on the ground,” says Lauren Faber-O’Connor, the city’s chief sustainability officer. “In LA climate change impacts our everyday experience, through extreme heat and drought.”

The IPCC’s findings — which were accepted by 195 governments just months ahead of November’s COP26 climate summit — reaffirmed what climate scientists have been forecasting for years. The stark warning, delivered as parts of Europe, China and Canada also battled to recover from devastating floods and fires, has focused minds on a burning and existential question: how do we prepare for what is coming?

Given the pressing threats that it faces, LA is more advanced in its thinking than most places. But cities, states and national governments around the world will need to develop their own detailed plans for how they can cope in a 1.5C world. And in some cases, they will be very expensive and require dramatic changes in the way they operate.

“The timeline is short and the response must be immediate,” says Tina Stege, climate envoy for the low lying Marshall Islands, which are highly vulnerable to rising sea levels. “Climate change is going to impact every region in the world. Adaptation planning needs to be at the forefront of what we’re all doing collectively.” 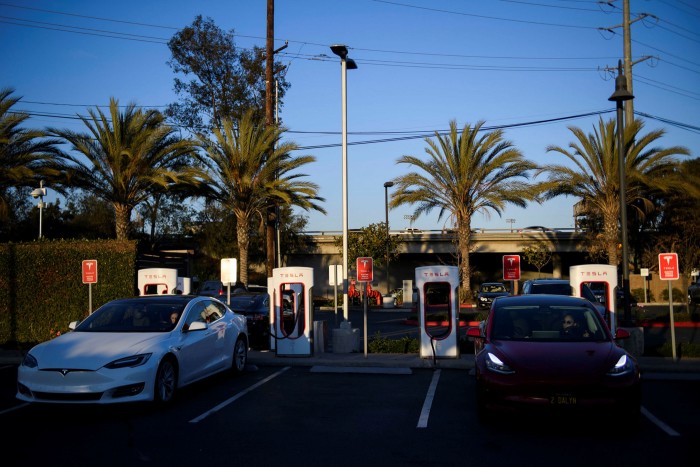 Los Angeles has more electric vehicle charging points than any other city in the US © Patrick T. Fallon/AFP via Getty Images

From villain to model

With its endless traffic jams and low-density, air-conditioned lifestyle, the Los Angeles model is in some ways a significant cause of the problem. But California also has a long history of groundbreaking environmental policy.

Garcetti, who also chairs the C40 Cities climate action network (and has been nominated to be President Joe Biden’s ambassador to India), has sought to extend California’s role as a policy laboratory. 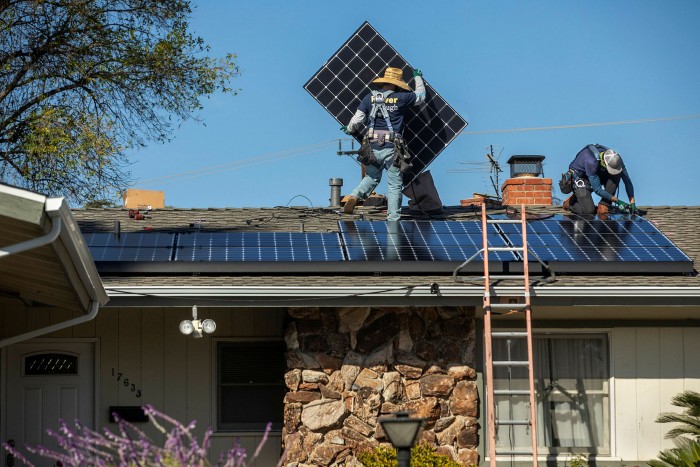 Rebates and incentives have encouraged the installation of rooftop solar panels. City planners project Los Angeles will operate with no coal power by 2025 © Mel Melcon/Los Angeles Times via Getty Images

The city’s Green Deal is already pumping nearly $1bn into Los Angeles’ woeful public transportation network every year, thanks to a 2016 ballot measure that increased sales tax to raise money for rail and other projects. It says it is expanding or creating 15 new public rail lines and spending more on mass transit than any other metropolitan area in the US. Its fleet of city buses is scheduled to go all-electric by 2030.

And Garcetti’s administration recently brought forward its zero-carbon emissions target for its electrical grid to 2035 from 2050, with planners projecting that it will operate with no coal power by 2025 thanks to success with its solar and wind power generation. It is also exploring “green” hydrogen storage in Utah, though the technology is unproven. The exposed San Gabriel riverbed, near Los Angeles, in June. The river and nearby reservoir are almost completely dry after a winter of extremely low precipitation © Mario Tama/Getty Images

Besides these big-ticket projects, LA has rolled out small incentives to help change Angelinos’ behaviour. Rebates and incentives have helped spur the installation of rooftop solar panels, helping LA to capture the most sun power of any US city. The city also has the most electric vehicle charging stations in the country.

Civic nudging has led residents to pull up their grass lawns and replace them with more drought-friendly landscaping, purchase high-efficiency washing machines and install environment-friendly shower heads, which the city offers for free.

If it seems extreme to replace the grassy lawn with a garden of stones and drought-tolerant plants — or even artificial grass, as some Angelenos have — it is worth a look at the data. Since 2000, at least one part of California has experienced “exceptional” drought conditions, the most severe level, in 190 out of a total of 1,127 weeks — or 17 per cent of the time — according to US Drought Monitor. In only 22 weeks, all in the year 2000, has the state been entirely drought-free.

Video: How cities around the world are tackling climate change

Defining when a drought begins and ends is tricky. But California is now around 15 years into this one, which the occasional wet year — most recently in 2017 — has not broken, says Daniel Griffin, an assistant professor of Geography at the University of Minnesota.

“The intensity of this drought in individual years is rivalling anything that we’ve seen for the past 1,200 years,” says Griffin, adding that the drought’s duration is also coming close to breaking records.

As the effects of climate change intensify, both wet and dry extremes in the state are expected to become worse and more frequent. Heavy rain delivered in short bursts can be harder to capture for storage and cause erosion and landslides, while not necessarily ending a drought.

“This is the reality of climate change,” says Heidi Roop, a climate scientist at the University of Minnesota. “How do we plan for living at both ends of these extremes sometimes in the same place in the same season?” 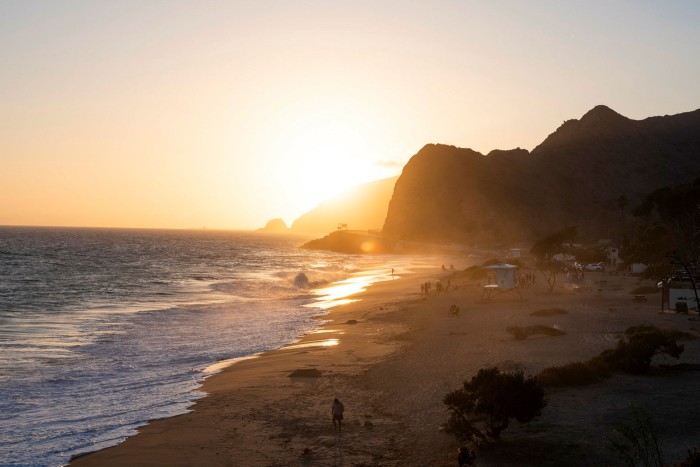 Solutions are likely to be both technical and behavioural: learning to use water more efficiently and waste less, while investing in new tools such as desalination, an energy intensive process that removes salt from water.

A key question is “how to do more with less?” says Griffin. As dry spells get longer and more intense, and California’s population gets bigger, “I don’t think we can just engineer our way out of this problem.”

A major barrier to preparing for extremes is a lack of money and resources — a challenge that is set to feature prominently at COP26. The remains of a fire station in Greenville, California. The Dixie Fire has destroyed about 500,00 acres in four counties © Josh Edelson/AFP via Getty Images

The UN Environment Programme has estimated that the annual cost of adaptation in developing countries could reach $300bn by 2030 and $500bn by 2050. So far, the world’s wealthiest nations have failed to deliver the $100bn a year they promised to developing nations in support for climate adaptation and mitigation.

The $100bn is “sort of the litmus test on whether we are moving forward or not, and at the moment we’re not”, says Patrick Verkooijen, chief executive of the Global Center on Adaptation, adding that climate finance should be split evenly between funding adaptation and mitigation. “There is no way forward for a successful Glasgow [COP26] outcome if that’s not solved.”

Fires and drought are not the only threats facing Los Angeles. Another looming problem that Garcetti’s Green New Deal doesn’t address directly is coastal erosion. The prospect of rising sea levels — which one projection says could add 9 feet of water along the California coast by the end of the century — could spell disaster for Malibu, Venice and the iconic Pacific Coast Highway. 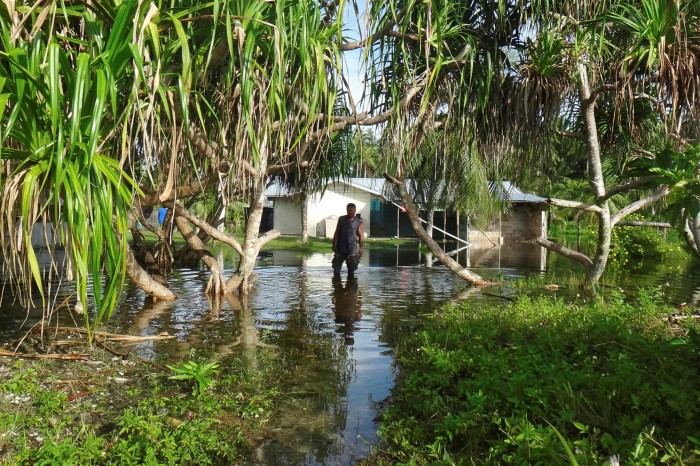 Mid-century projections suggest 17,000 residents and $7bn in property along the California coast are at risk of coastal flooding due to rising sea levels and intensifying storms. Half of the beaches could be lost by 2100.

The city is looking for ways to protect people and infrastructure from storm surges. But planners say there is no choice but to establish priorities. In the immediate future, that means making sure the city has reliable supplies of drinking water and is cool enough to live in.

“Yes, the city is a coastal city, and our analysis shows that sea level rise is an issue,” says Faber-O’Connor. “But it is not necessarily one of the nearest-term problems we face. What we’re most heavily invested in [over] the near term is really around urban cooling and water resilience.”

Pfizer CEO to Public: Just Trust Us on the Covid Booster