LAUSD is fighting to meet deadlines for the COVID vaccine mandate 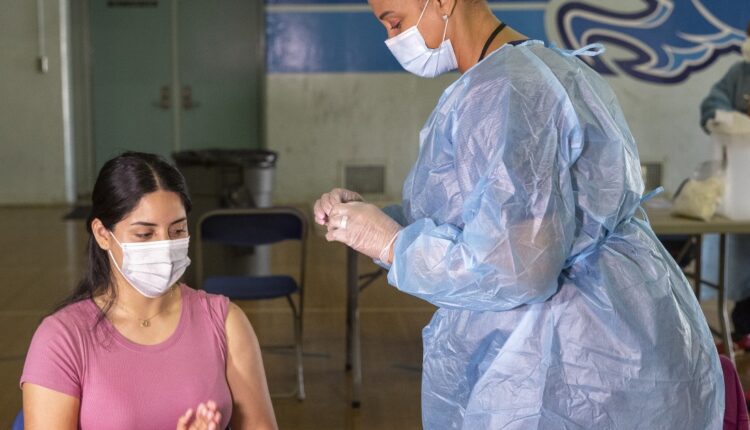 In the Los Angeles Unified School District, the high-stakes COVID-19 vaccination mandate deadlines are fast approaching and employees who refuse the vaccinations are forced to lose their jobs while unvaccinated students would ultimately be forced off campus into an online program.

While the vast majority of students and teachers are expected to abide by the mandate – and may even feel reassured by the mandate – many in the country’s second largest school district have so far resisted the requirement. Currently, around one in five workers in the district, around 12,000 workers, have not yet started their vaccination, as announced at the education committee meeting on Tuesday. A loss of this magnitude would further disrupt school operations, especially since the district has difficulties filling more than 2,000 positions.

All school district staff must be fully vaccinated by October 15, unless they have an approved religious or medical exception. There is also a deadline for students: by October 3, students 12 and over must receive their first of two doses if they want to participate in school-related extracurricular activities, including all sports as well as clubs, dance teams, bands, drama or anything else outside of the school academic work.

All students aged 12 and over must be fully vaccinated by the beginning of the second semester. Only medical exemptions are permitted for students.

A district spokesman said Tuesday that the percentage of workers vaccinated is expected to increase significantly. The current quota of 80% does not include people with vaccination appointments or those who have simply not yet uploaded any documents.

The district has not released numbers on how many employees or students apply for or receive exemptions.

A teacher who asked for anonymity described the process she went through.

“LAUSD sent us a form to fill out whether we wanted a medical or religious exemption,” said the teacher. “We were asked to attach a statement to her. I have a statement from a pastor that I have attached. ”Last Friday, after five weeks, she heard again. “I was told that I would soon hear from Human Resources about my options for taking leave, where I can use my personal days and then go unpaid – or go to the City of Angels.”

City of Angels is the district’s option this year for families who want distance learning instead of face-to-face classes. The program has been plagued by problems, largely because it was unprepared to treat 15,000 students, especially when many signed up just before school started on August 16.

Transferring teachers to the City of Angels would solve two problems. It removes an unvaccinated teacher from the district property – in accordance with district guidelines – while addressing a staff shortage. City of Angels teachers can work from home. But such a transfer leaves a hole in the school that a teacher leaves behind.

It is unclear whether the City of Angels workaround is nearly enough to accommodate teachers who cannot or will not be vaccinated. City of Angels is also not a solution for non-teaching unvaccinated personnel.

LA Unified has long been a leader in stringent COVID security measures – including weekly coronavirus testing of all students and staff. This focus is being celebrated as a national model to create a safe environment and build trust from parents and staff returning to full-time face-to-face education for the first time since March 2020. The district was the first major school system in the country to issue a vaccination mandate.

However, critics have said that the district policies are overly cautious, impeding social interaction and physical activity among students, while also enforcing quarantine rules that have resulted in frequent and unnecessary academic interruptions.

District officials attribute their actions to a declining rate of coronavirus infections revealed through testing, a trend that is also being reflected across the county. Nonetheless, the lawsuits targeted the coronavirus tests and masking rules that go beyond state and county guidelines.

Several anti-vaccine workers told the Times that a lawsuit was being prepared on their behalf. The district has already been threatened with litigation on behalf of students by the Children’s Health Defense group.

Although the mandate will not go into effect for more than two weeks, it is the 11th hour for personal vaccinations. The district is offering employees the Johnson & Johnson vaccine as an option because other approved vaccines would not take full effect in a timely manner.

A teacher who also refused to be named makes a significant sacrifice to avoid vaccination. The district denied her application for exemption from religion, so she is retiring. Had she been able to work three months longer, she would have qualified for lifelong health benefits based on decades of service.

“Troubling and sad,” she said.

Jamal Y. Speakes Sr. loves his school and enjoys teaching film production at the Valley Oaks Center for Enriched Studies in Sun Valley. Waiting for his application for religious exemption, he is worried that he will have to leave campus one way or another.

“I’m not against vaccinations,” said Speakes. “I am against the mandate and how LAUSD enforces this as the only option,” said Speakes. “The thought of not being able to return to class because of this mandate is daunting.”

Speakes added, “I’m also upset with my teachers union, which is completely dumping these teachers because it doesn’t fit their narrative.”

The board of the teachers’ union supports the vaccination mandate. At last week’s union meeting, officials diverted a proposed resolution questioning vaccinations by referring the resolution to committee – a move sometimes used to bury a motion or delay action, insiders said .

One teacher said she got the vaccine “because I had to” to keep her job, but she will not allow her sixth grader at a school in the West San Fernando Valley to get the vaccine.

Students participating in after-school activities are severely restricted if they do not receive their first dose by Monday and are only allowed to attend class. All eligible students must receive a second dose no later than December 19.

Mayra Figueredo thinks she’ll move her two children out of LA Unified if the mandate is enforced. She said she was one of 1,400 social media group considering her options.

The vaccine “is way too new and no one is aware of the long-term side effects,” Figueredo said. “I’d rather my son get COVID, to be honest.”

About three weeks ago, the county estimated that about 80,000 eligible students had not yet been vaccinated.

Still, for most parents – apparently a large majority – vaccines are a faster and prudent way out of the pandemic – as well as one recommended by most health professionals.

“I’m waiting to send my kids back to private school until they’re vaccinated – and have a vaccination order for their age group – they’re both under 12,” said Carmel Levitan, who said she couldn’t wait for her City kids of Angels program back to Eagle Rock Elementary School.

Alzheimer’s Drug Targets People With Mild Cognitive Impairment. What Does That Mean?