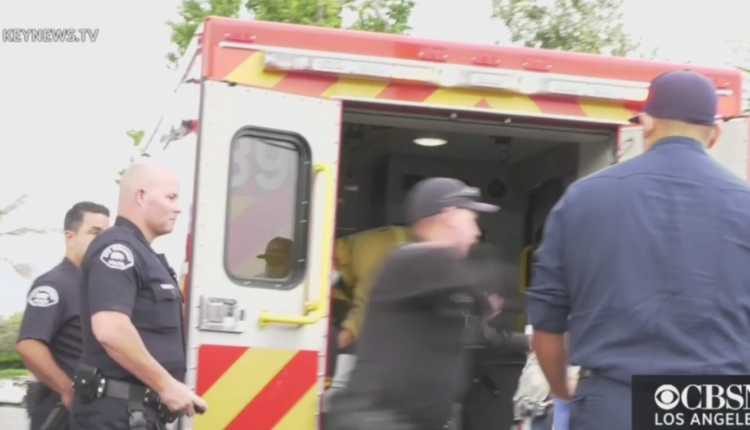 SAN FERNANDO (CBSLA) – A Los Angeles police officer was suspended after video emerged of what appeared to be beating a reluctant suspect.

According to LAPD, the incident began on Saturday when suspects hijacked a Honda with a car in the San Fernando Valley and the vehicle eventually crashed on 2nd and Hubbard Streets in San Fernando. Two men were eventually arrested.

Vehicle reportedly hijacked and crashed by two suspects, one of whom was apparently beaten by an LAPD officer.

While the officer in question has now been relieved of his duties, several witnesses are defending the police, saying that a suspect has repeatedly spat at, cursed and threatened police officers.

“Are you going to spit in someone’s face when there’s COVID? You just don’t do that, ”said a witness identified only as Nikki, who claimed to have seen almost everything. “Next you see him spitting on the cop, and when he spat on the cop for a second … and the police finally beat him.”

A neighbor said the man in handcuffs was the driver and pointed a gun at them before running away.

CONTINUE READING: LAUSD courses begin Monday amid a surge in new daily infections due to the Delta variant Seen here, after the alleged blow against the suspect on Saturday, an officer steps between the suspect and the now suspended officers.

The obvious blow is now the center of a complaint investigation by the LAPD, although some witnesses said they were surprised that the department is investigating the officer’s actions.

“Because it works. Ello defends the community, ”said another neighbor, saying the officer was doing his job defending the community.

LAPD chief Michael Moore released a statement saying, “The images in the video are deeply disturbing and while we wait for the investigation to close, the department will act quickly in any case of excessive or unnecessary violence.”

MORE NEWS: Passport Mass will be held at the South LA Post Office on Sunday, with more planned at other post offices in the area

So far, the investigators have not been able to identify the suspect or the now suspended officer.