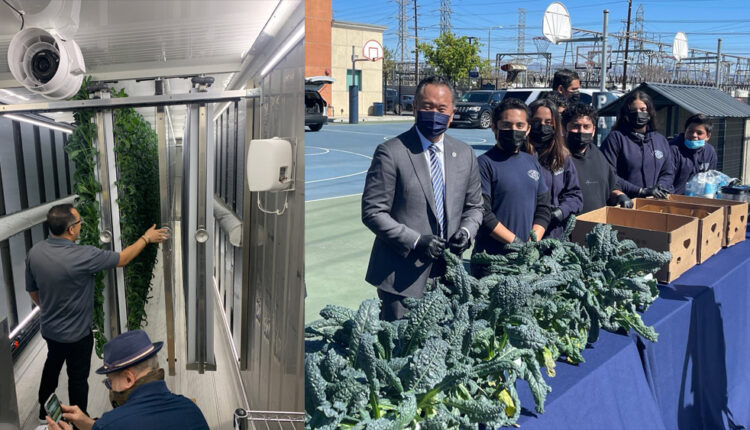 LOS ANGELES (CBSLA) — Take a shipping container in the San Fernando Valley, add low-income, at-risk children and teens, and you get – kale?

A fruitful partnership between the City of Los Angeles, LADWP, and the LAPD’s PALS program has yielded its first harvest of kale that was grown in an indoor farm housed inside a shipping container. Los Angeles City Councilman John Lee was on hand last Thursday to help PALS youth harvest several bushels of kale from the indoor farm.

The successful harvest shows that cities can be the future of farming, Lee said.

“This new pilot program will not just make fresh produce available year-round to local residents, but provide our youth the opportunity to learn about innovative and environmentally sustainable solutions to address food production challenges,” he said in a statement.

The 40-foot, almost 8-ton shipping container houses on an indoor pod farm that uses hydroponic farming techniques that don’t require soil or pesticides. Indoor farming can save up to 95% of water and yields 50% more produce than traditional farming, according to the LADWP. Indoor farming also uses less energy and water due to its soil-less growing techniques and use of energy-efficient grow lights.

Northridge was once home to Halverson farm, which grew corn, tomatoes, lettuce, and celery, according to Cal State Northridge’s San Fernando Valley history. But the area is now heavily urbanized, so an indoor farm at LAPD Devonshire PALS center is a chance for children to learn how to grow food even without access to a yard or traditional gardening requirements. The PALS youth help maintain the farm and with harvesting the produce to donate to local community-based organizations.

The effort is a pilot program between the LADWP and the Electric Power Research Institute. The LA utility is one of about a dozen nationwide participating in a two-year study to advance indoor food production in urban settings as a solution to reduce energy and water use, as well as cut down carbon emissions from the transport of foods over long distances . LADWP has also implemented vertical farming at it the John Ferraro Building, its downtown LA headquarters.