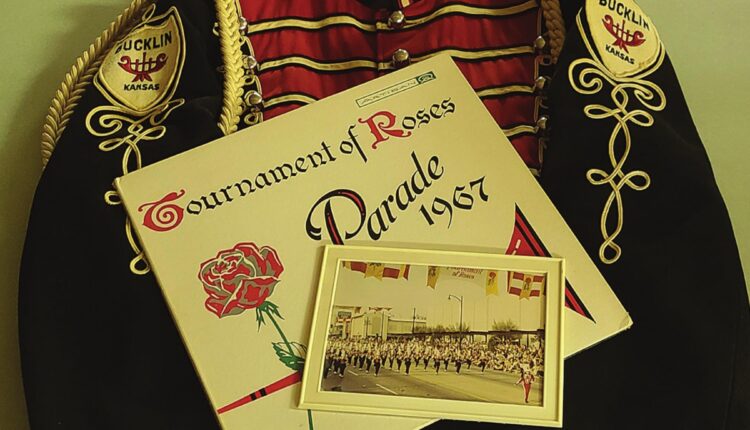 Doug Austen Special to the Globe

Fifty-five years ago, the Bucklin High School Band participated in the Tournament of Roses Parade on Jan. 2, 1967, in Pasadena, Calif. The invitation came in early 1966 to Director, Loren Cooper. Mr. Cooper kept two scrapbooks of letters, newspaper clippings, and other documents related to the preparation for and participation in the parade. These scrapbooks are now in the collections of the Legacy Center.

The county had already seen the Dodge City High School Band perform in the 1961 version of the parade, so the communities of Dodge City and Bucklin knew what it would take. Fundraising began in earnest and included band members raising $100 each. In May, the fundraising included band members (in uniform) assisting at businesses throughout Dodge City (it even included Gambles at 310 Gunsmoke – the current home of the Ford County Legacy Center).

The band took part in the Christmas parade in Dodge City on Saturday, Dec. 3. The Dodge City band lead the parade which included huge air-filled balloons followed by the Rose Parade-bound Bucklin High School band. The band received accolades from the Governor of Kansas, William Avery along with Senator James Pearson and then representative Bob Dole.

On Dec 8, the band presented an Appreciation Concert at the Bucklin High School Auditorium and included tunes to be played for the parade (which included “I’m a Jayhawk”).

The trip itinerary included departure by train from Dodge City on Dec. 28 with arrival in Los Angeles on Dec. 29. They then transferred by bus to Santa Monica which was their base of operation while in California. In addition to rehearsals for the parade, the band visited Marineland and Disneyland, dined at Tiki-Jo restaurant and attended the TV show “The Dating Game.”

They also toured Universal Studios and played a concert at the Santa Monica Hall. After marching in the parade, they attended the Rose Bowl football game then enjoyed dinner at the Fred Harvey restaurant in Los Angeles before boarding the train for home.

Another Kansas connection was highlighted in the quarterly KANSAS publication by the State of Kansas Department of Economic Development. The uniforms worn by the band were Kansas-made at the Fruhauf Southwest Uniform Co. (which still exists in Wichita). One of these Bucklin uniforms is in the collections of the Legacy Center.

Many thanks must go to Loren Cooper, who was the band director, for leading the Bucklin High School Band to the Rose Parade (and maintaining the scrapbooks) and to Kathy Feikert (band alum) for donating the scrapbooks and other artifacts to the Ford County Legacy Center.

A home movie reel of trip highlights is also in our collections and has been digitized and will be available for purchase through the Bucklin High School All-School reunion later this year.