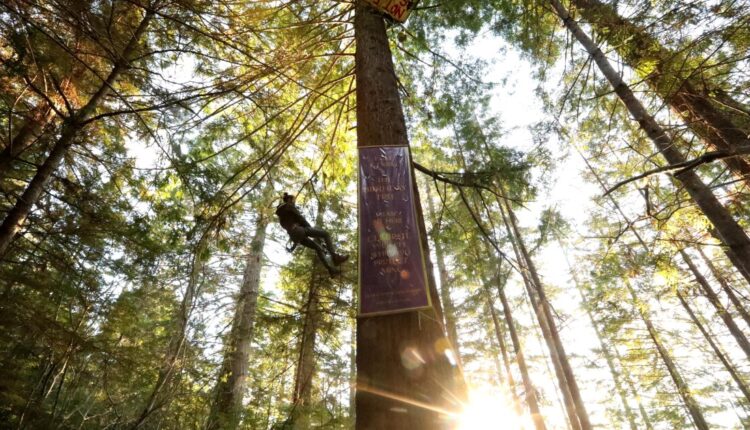 Michael Hunter slammed a mallet onto a hand-held drum, the beats ringing out in rapid succession.

“The drum is always loud enough it seems like,” he said, “where people rally around the drum.”

Hunter is tribal chairman of the Coyote Valley Band of Pomo Indians, and on this sunny Sunday, dozens of people clamored around him in the parking lot of Jug Handle State Natural Reserve. Across Highway 1, nearly 50,000 acres of stately redwoods rose like a chorus of elders: Jackson Demonstration State Forest, the Pomo people’s ancestral land.

Hunter was kicking off a series of demonstrations here along the Mendocino Coast to protest the redwoods’ destruction from state-sponsored logging and research.

Michael Hunter, left, chairman of the Coyote Valley Band of Pomo Indians, starts a demonstration criticizing the Caspar 500 Timber Harvest with a song in Pomo before marching through Jackson Demonstration State Forest.

The Jan. 23 gathering was the latest rallying cry in a decades-long war over Jackson’s trees, a battle that has pitted environmental activists against state and timber industry leaders. At the heart of the dispute are differing opinions about the best use of public land and who should steward the precious resource.

Those who oppose logging call it a greed-fueled operation that runs contrary to climate goals. Supporters see it as pragmatic management of a renewable resource.

Now, Native American tribes indigenous to the area have joined the fray, demanding a say in the fate of their ancestral homeland. And state officials are listening.

The renewed debate playing out behind the so-called redwood curtain could deliver the first agreement with Indigenous tribes to co-manage a state demonstration forest, according to officials at the California Natural Resources Agency.

It’s a historic path supported by stakeholders on both sides. But there’s a wrench in the works: State and tribal leaders don’t see eye to eye on important aspects of Jackson’s future. It’s not yet clear how the chasm between their visions will be reconciled.

“Those redwoods are our relatives,” Hunter said. “When they’re cut, it’s painful.” 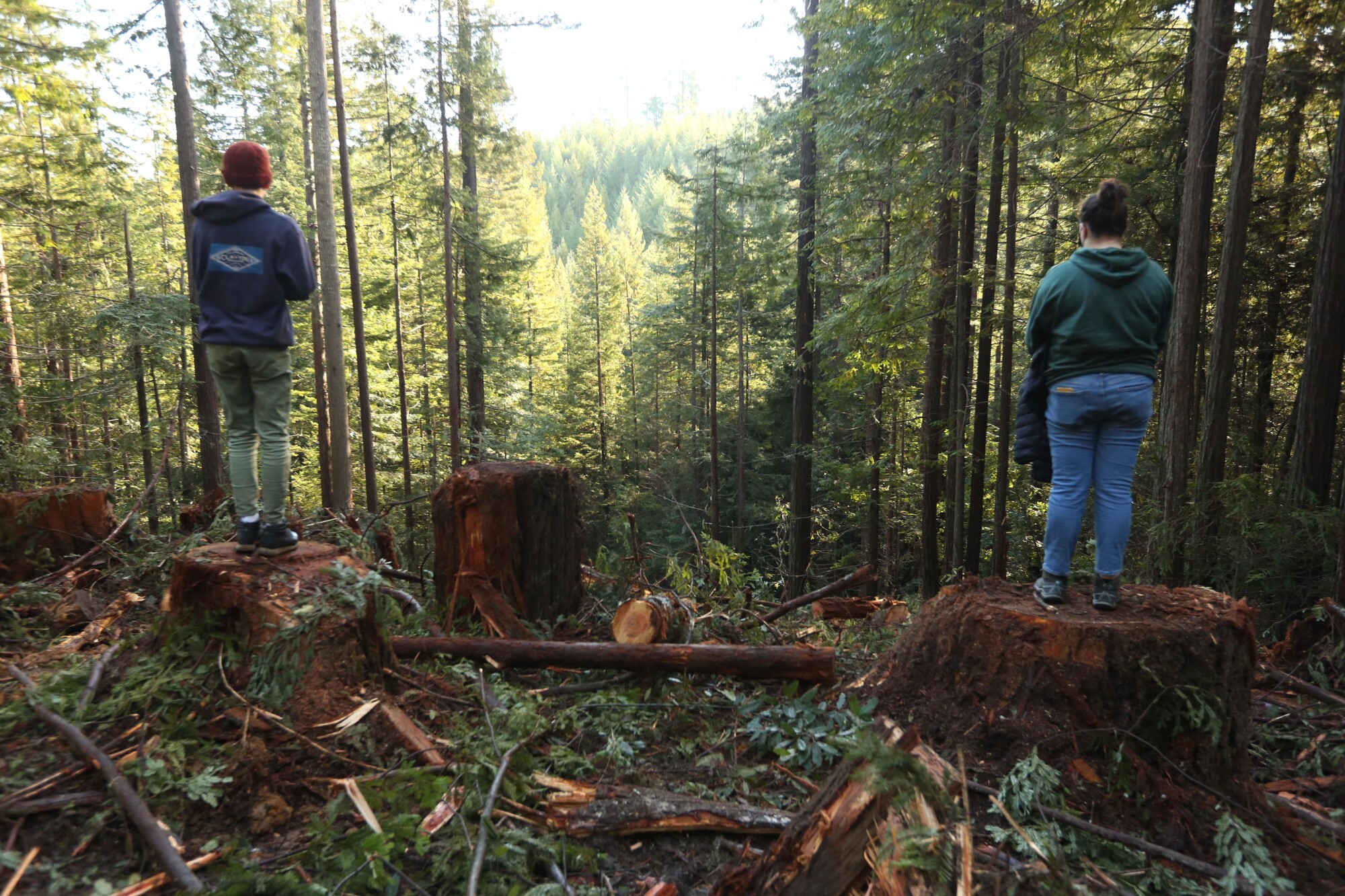 Protestors who call themselves “forest defenders” stand on the stumps of fallen redwood trees while participating in a “Safety First” rally against logging in the Jackson Demonstration State Forest.

The timber industry casts a long shadow in Mendocino County. Though dozens of mills have closed over the decades, trucks still hurtle down Highway 20 carrying stacks of hulking redwoods, easy to distinguish by their crimson heartwood. Many here know someone in the timber industry, or have worked in it themselves.

Jackson is the largest of the state’s nine demonstration forests, living laboratories for scientific study. It’s managed by the California Department of Forestry and Fire Prevention, or Cal Fire, one of 26 departments, conservancies and commissions overseen by the California Natural Resources Agency. 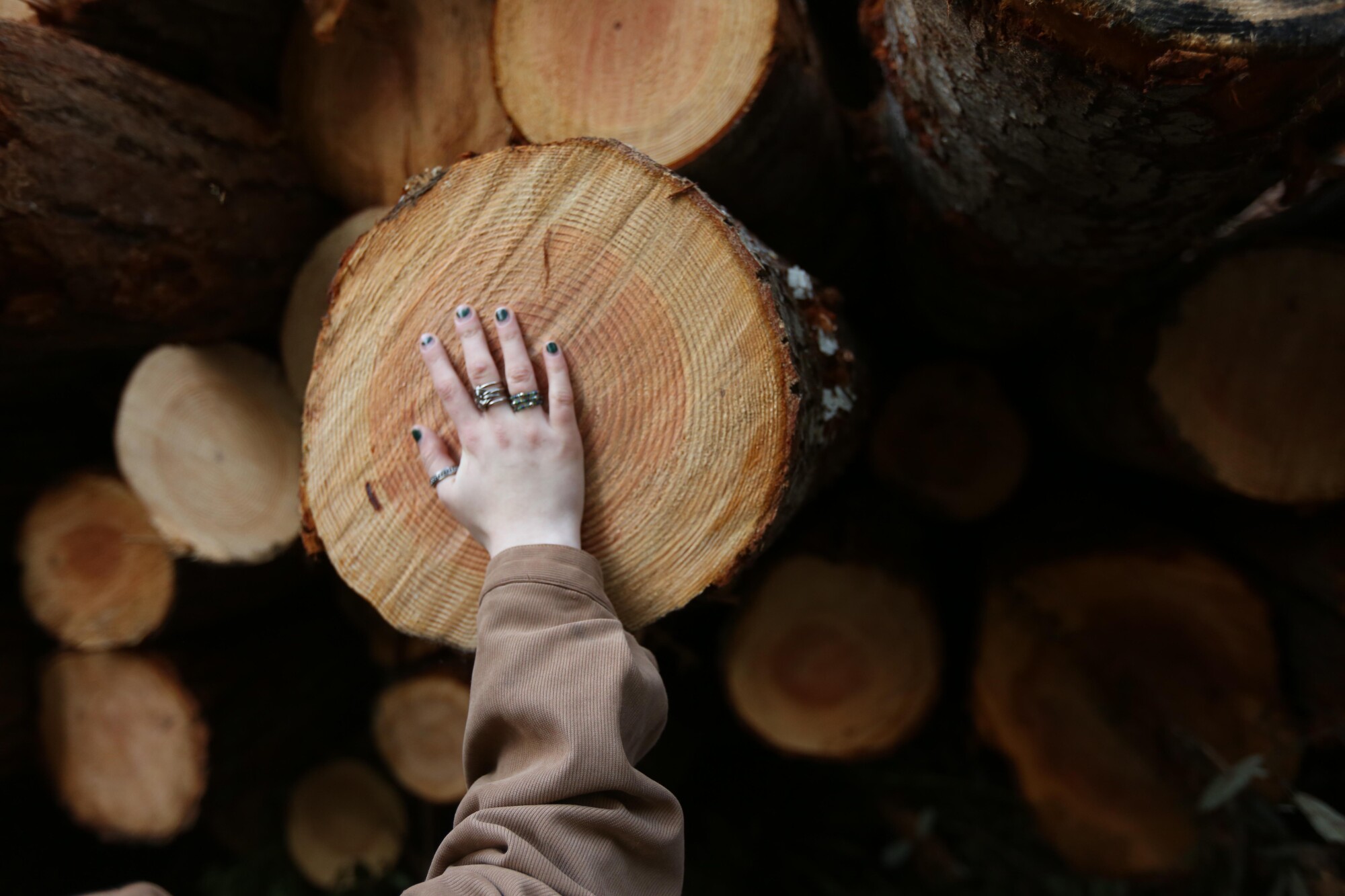 A 15-year-old activist places her hand over one of several Douglas fir and Redwood trees cut down by loggers in Jackson Demonstration State Forest.

Cal Fire officials create Timber Harvest Plans, commercial logging sites that are put up for sale at several demonstration forests, including Jackson. A sawmill might purchase a plan, or part of one, and then hire a licensed timber operator to fell the trees.

Most years, they also bring in money — nearly $8.5 million annually, a majority from Jackson — which funds operations at the demonstration forests.

But on Jan. 19, Cal Fire announced that there would be no additional timber sales in Jackson during 2022.

Some loggers complained about the decision. Protesters who call themselves “forest defenders” take credit for the stoppage. 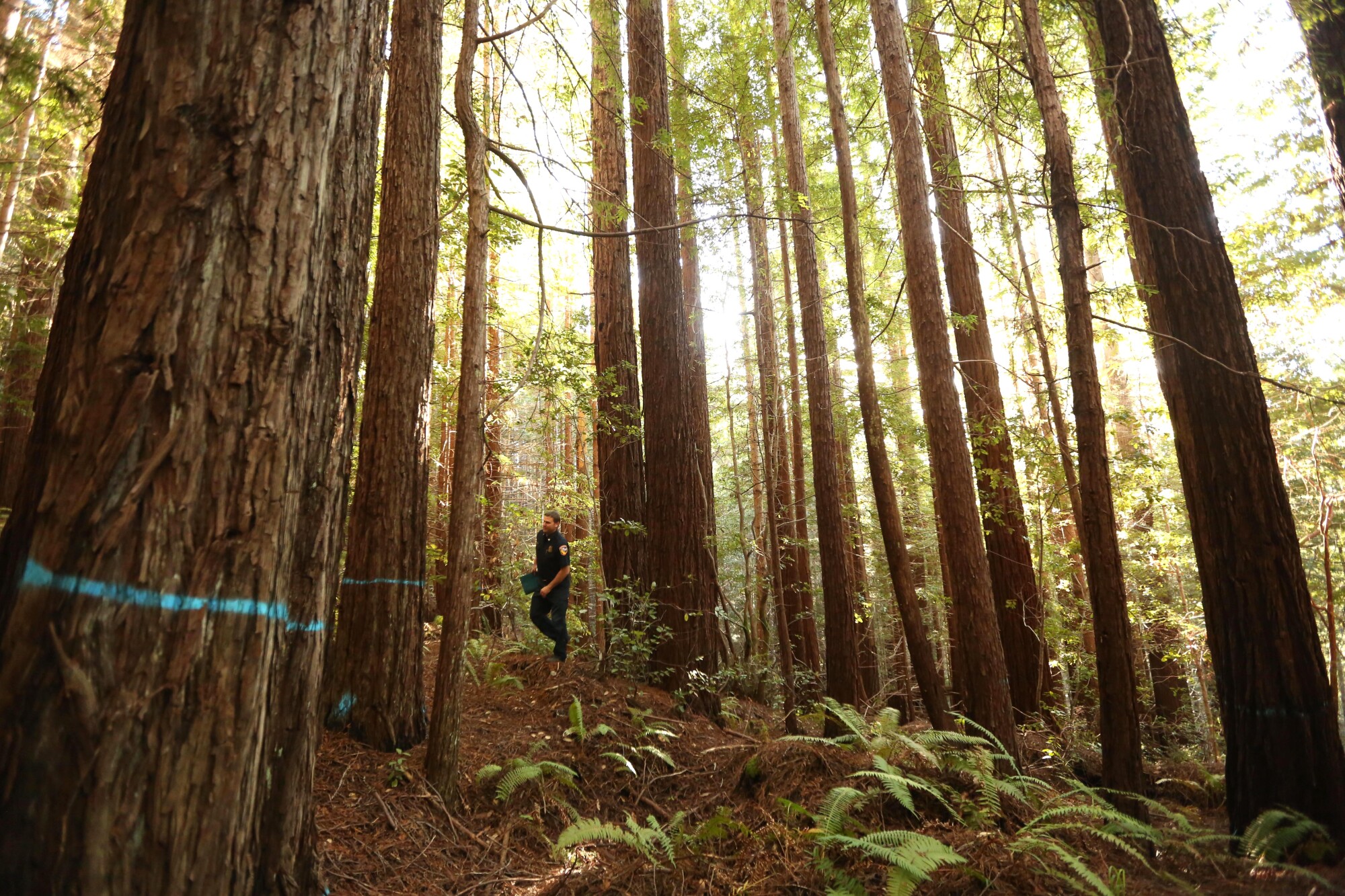 Cal Fire State Forests Program Manager Kevin Conway walks toward redwood trees that are marked, left, to be cut down in Jackson Demonstration State Forest. Cutting down the trees helps provide sunlight and nutrients to help younger trees grow, he says. “We are leaving a lot more than what we’re harvesting,” said Conway about the Caspar 500 Timber Harvest. 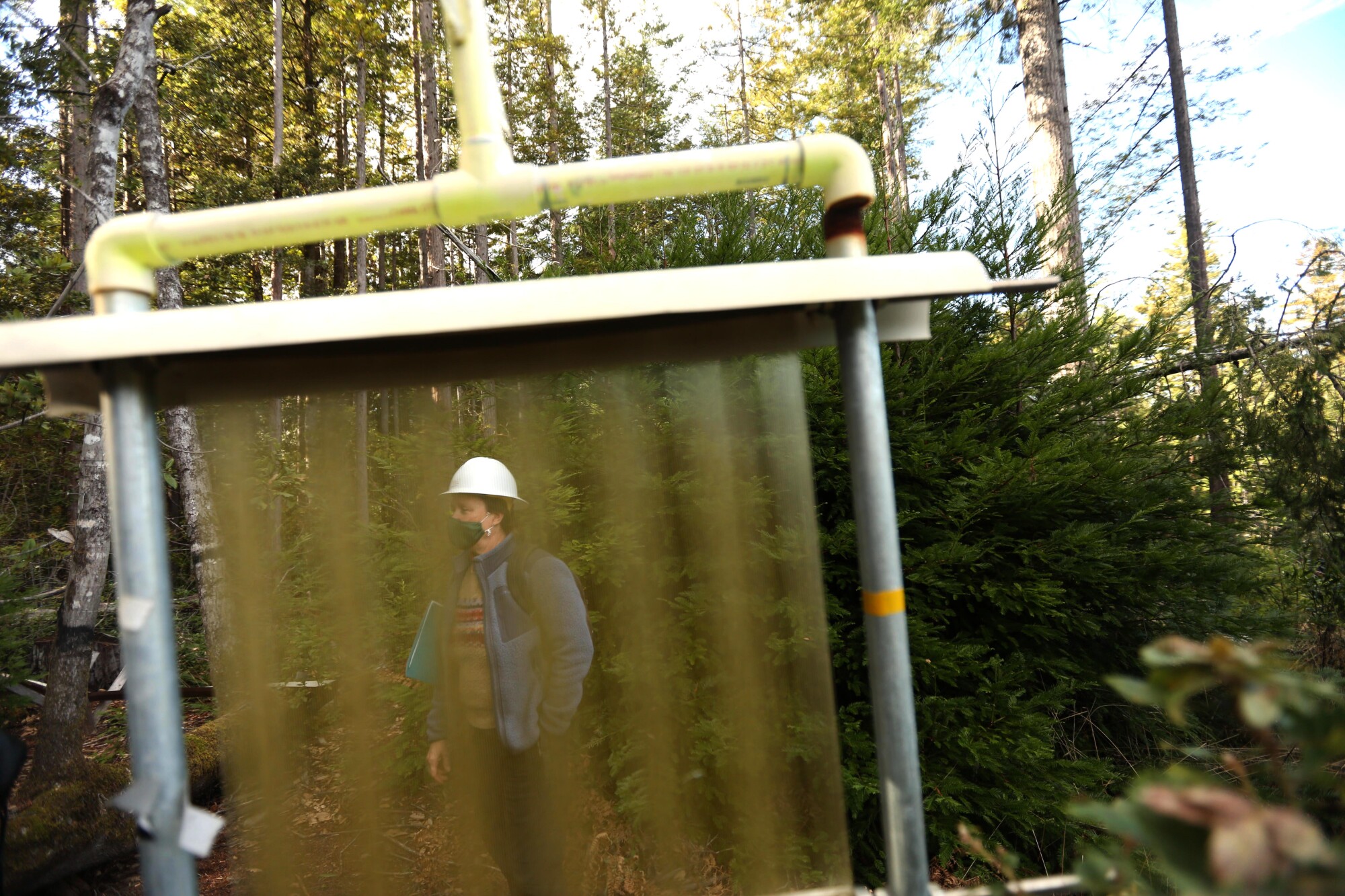 Hydrologist Elizabeth Keppeler is framed by a “fog harp” that is part of the Caspar Experimental Watershed. The fog harp uses parallel wires to collect water from fog.

About 10 months earlier, the protesters had embarked on a David-and-Goliath-scale battle to stop commercial logging in the forest. They erected tree sits, used their bodies to shield redwoods from logging equipment and amplified their cause on social media. Several were arrested. One was hit by a car but managed to walk away.

Those rallying to halt logging at Jackson argue that the threat of climate change is of top importance. Cutting swaths of enormous, carbon-sequestering trees, they say, isn’t conducive to an environmentally sound future.

Logging was halted in some areas amid the protests. It was deemed too dangerous to have people running around as chainsaws whirred and behemoth trees topped. 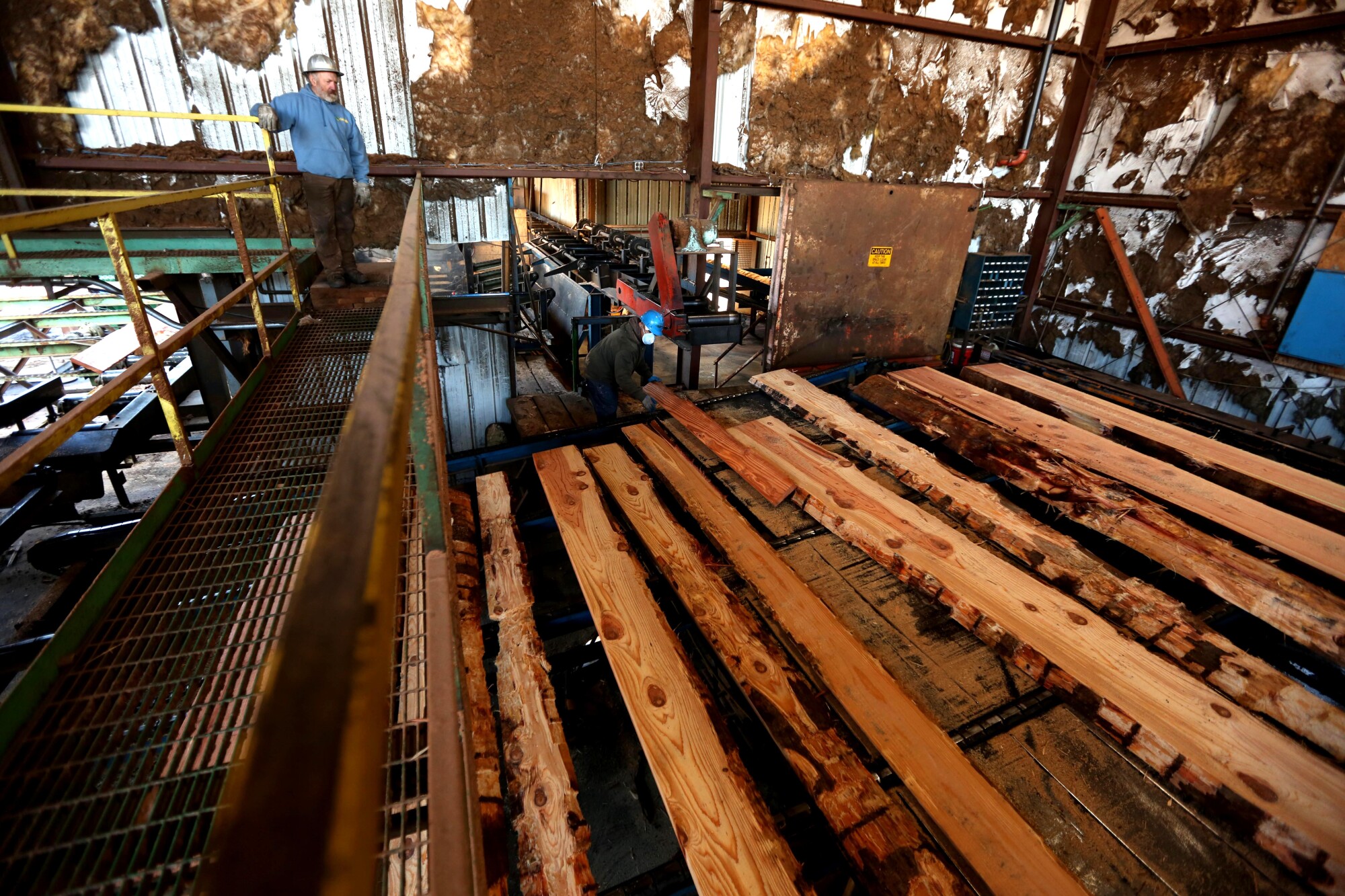 It’s not the first time tensions have boiled over. A series of lawsuits halted logging in the forest from 2001 to 2009. Judi Bari, a legendary environmental activist, led Earth First! Campaigns against logging in the region in the 1980s and 1990s.

Myles Anderson, co-owner of a logging company in Fort Bragg, Calif., blames state officials for siding with demonstrators in the latest uprising. He defends logging operations and criticizes the recent tactics used to stop it. Protesters, he said, put themselves and loggers in danger in an effort to stop a legal enterprise.

“No one wakes up in the morning and says, ‘I want to fell a tree and squish someone,'” Anderson said. “It’s their greatest fear.” 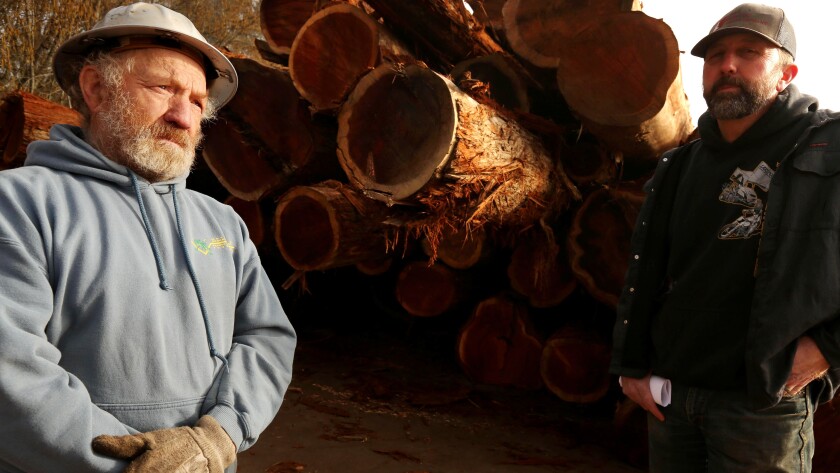 Timber business leaders view activists’ tactics not only as life-threatening and illegal but economically harmful.

The latest anti-logging movement can seem like watching a rerun of the same old movie. But some see the tribes’ emerging role as a game changer, potentially offering a new ending to an oft-repeated tale.

Linda Perkins, 81, initially resisted getting involved with the recent protests at Jackson. She first took on the timber industry in the early 1990s as part of Bari’s campaign, known as the Albion Uprising. She’s been around long enough to see all kinds of approaches fail.

“This is different,” she said during a recent demonstration near a logging site off Highway 20, which winds through Jackson Demonstration State Forest. “We’re going to succeed this time.”

Success, Perkins said, is however the Pomo define it. 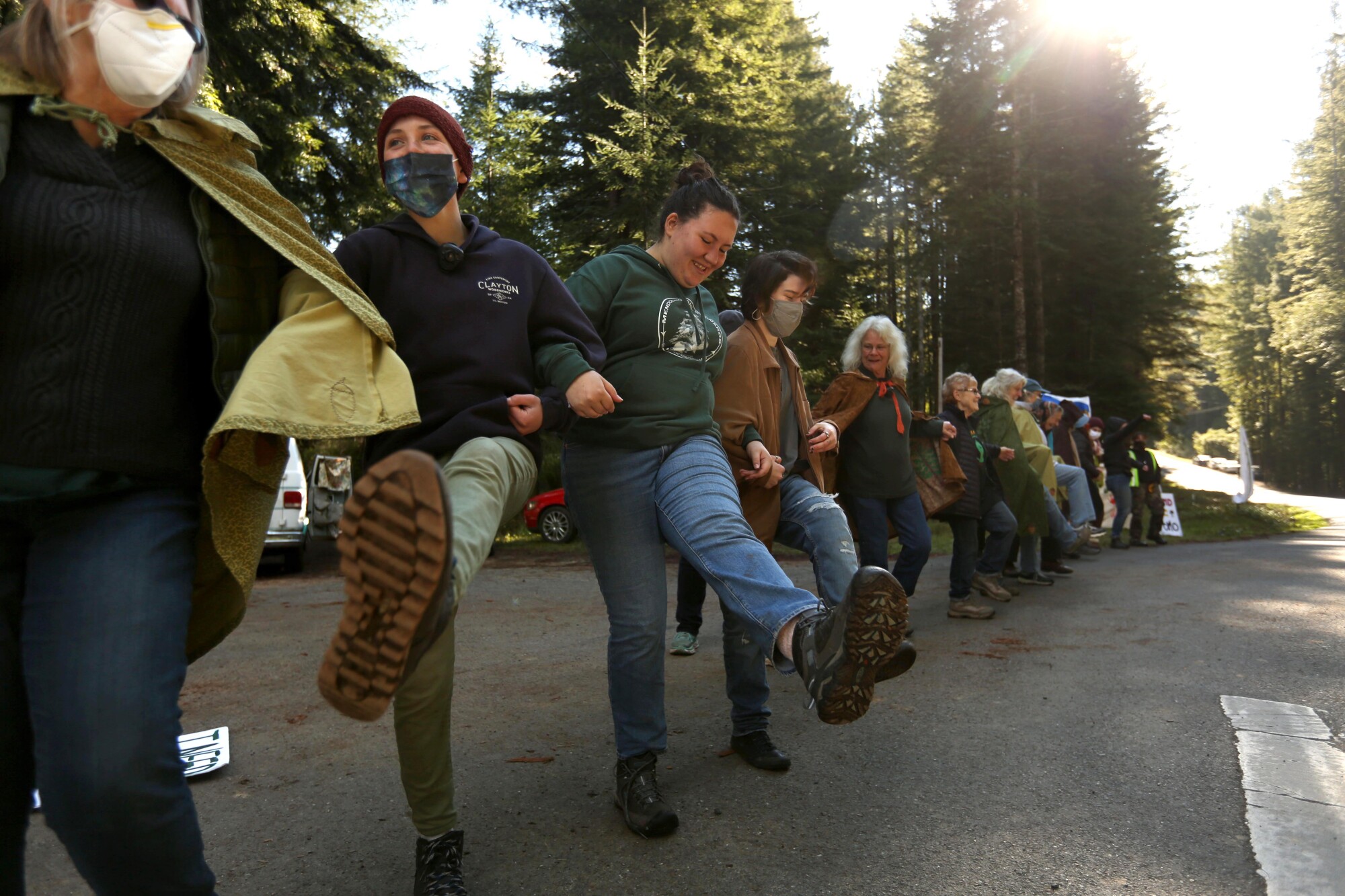 “Forest defenders” dance and celebrate their efforts to bring a temporary stop of the Caspar 500 Timber Harvest during a “Safety First” rally at the Camp One logging site in Jackson Demonstration State Forest.

Amid the protests, the Coyote Valley Band of Pomo Indians stepped up to initiate government-to-government consultations with the state. Then-Gov. Jerry Brown outlined tribes’ right to the high-level talks in policy matters that affect their communities in a 2011 executive order.

gov. Gavin Newsom has since built on Brown’s order. In September 2020, he issued a policy statement encouraging all state entities “to seek opportunities to support California tribes’ co-management of and access to” state-owned lands within the tribes’ ancestral territory.

Newsom acted, he wrote, “in the spirit of truth and healing in recognition of past harms” done to the tribes. 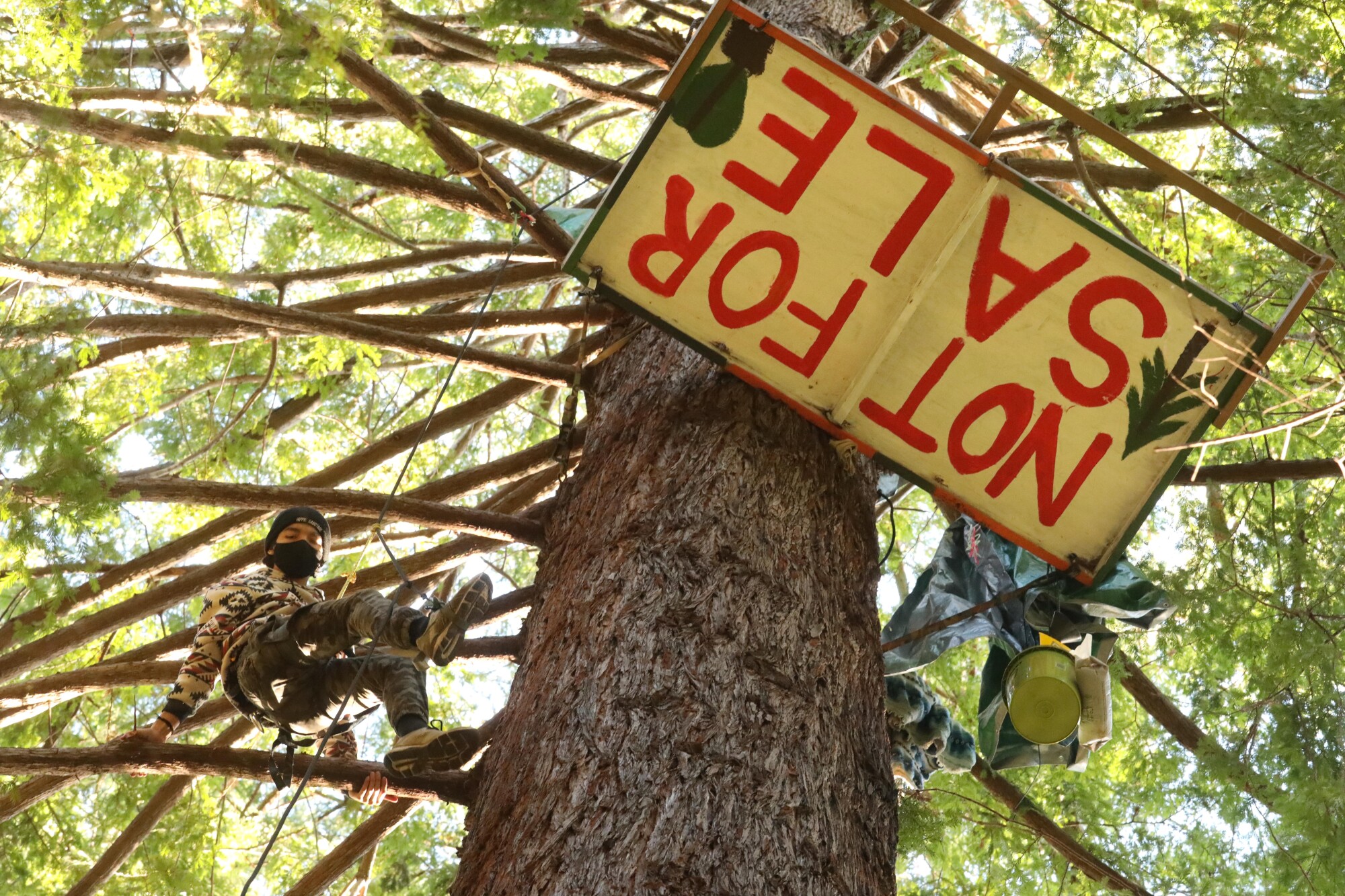 A 16-year-old activist who goes by the alias Walker rappels up a redwood tree named Gemini in Jackson Demonstration State Forest.

Tribes, in effect, have access to a seat at the table. “We have leverage,” said Polly Girvin, an advocate for the tribe.

Talks are underway with local tribes to formalize their role in managing Jackson, and agreements could be realized “in months, not years,” said Wade Crowfoot, secretary of the state’s Natural Resources Agency.

Protecting cultural and historic resources is of top importance, but what co-management would look like in practice is still taking shape.

Genevieve EB Thompson, the agency’s assistant secretary for tribal affairs, is “working with sleeves rolled up” to determine what’s important to various tribes, Crowfoot said. It could entail implementing tribal methods of prescribed fire and allowing access for cultural practices such as acorn harvesting. There are “so many ways of sustaining this forest other than cutting down trees,” climatologist JP O’Brien says.

But the Coyote Valley Band of Pomo Indians is pushing for bigger change.

Girvin said they envision a future for the forest based on conservation. Trees wouldn’t be cut. Studies carried out would be in service of healing the forest. Nothing would be done for profit.

“We don’t put a value on our relatives,” she said. “We wouldn’t want to put a price value on your mom or something.”

The tribe has experience with forest management. Priscella Hunter, the tribe’s former chairwoman, heads an intertribal council that manages more than 4,000 acres of land on the North Coast. Save the Redwoods League recently transferred more than 500 acres along the dramatic Lost Coast to the InterTribal Sinkyone Wilderness Council. 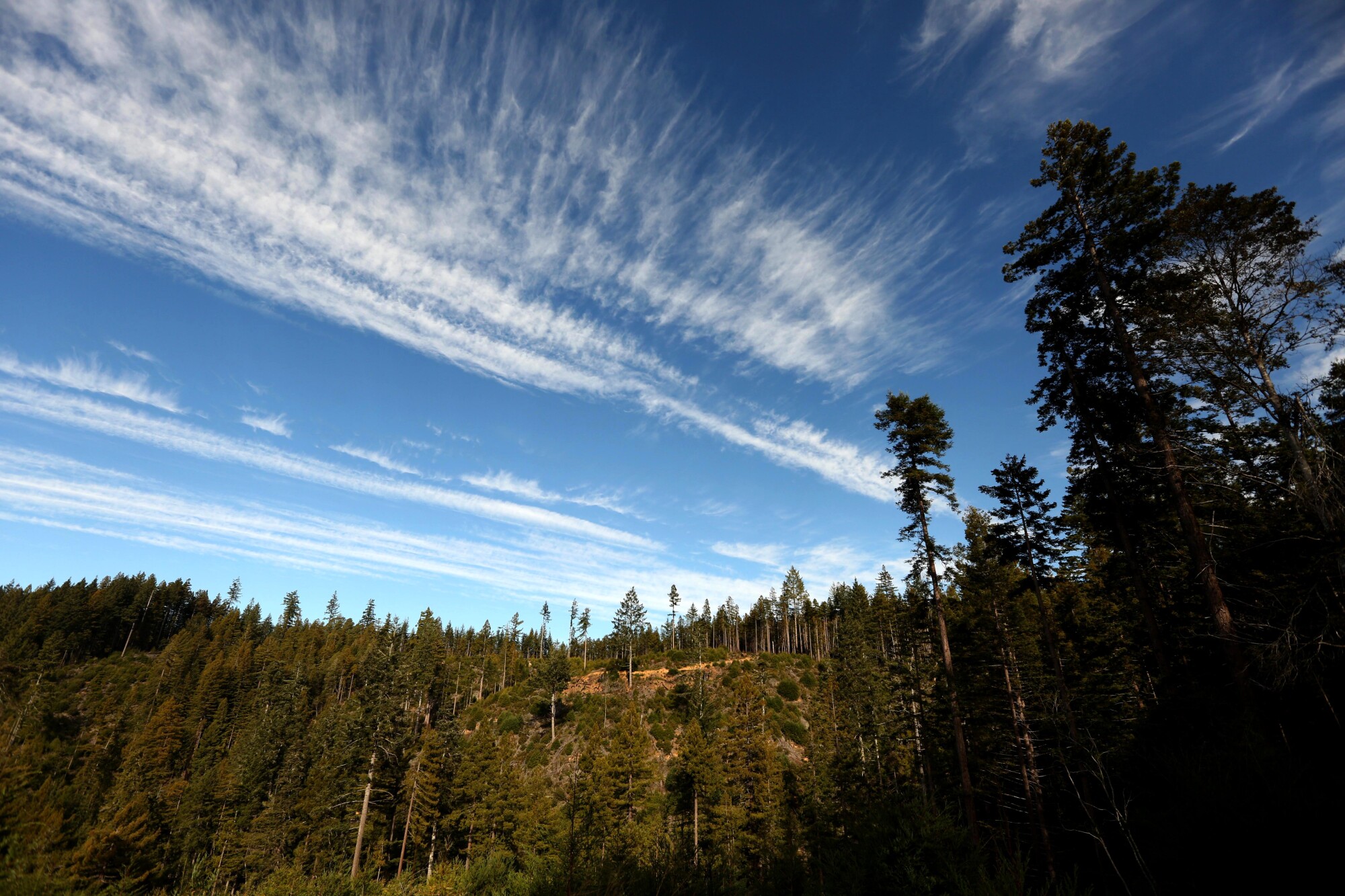 The Jackson Demonstration State Forest in Mendocino County is a working “demonstration forest,” where
the California Department of Forestry and Fire Protection honors logging techniques with the goal of demonstrating best practices for sustainable forestry.

Tribal co-management is an emerging concept, and it’s never been implemented in one of California’s demonstration forests.

Matt Simmons, an attorney for the Environmental Protection Information Center, described it as “a sort of a brave new world of possibilities.” The center, based in Arcata, Calif., is part of the coalition pushing to stop logging at Jackson.

Simmons said some agreements have worked better than others. And there’s often pushback from those who don’t want to cede control.

It’s “still in its early phases,” Simmons said, “but it’s really hopeful, and I think, for a lot of people, it’s sort of the moral obligation for these lands.”