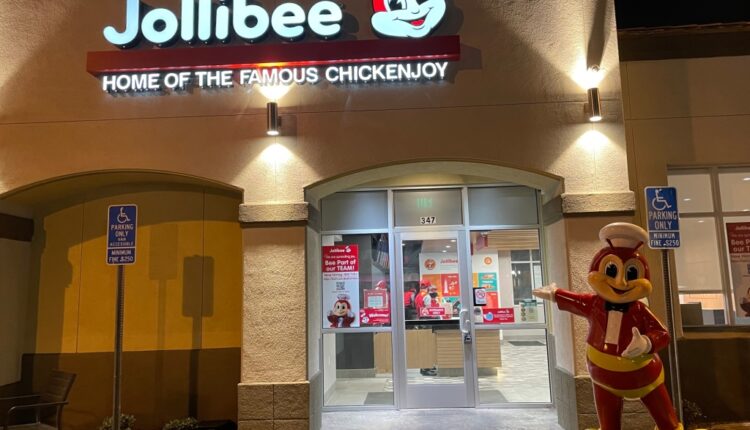 Here in Southern California, there are branches of the Filipino fried chicken chain jollibee in the San Fernando Valley in Panorama City; in both Mid-City and Downtown Los Angeles; at Eagle Rock; in the South Bay, in Torrance and Carson; at Long Beach in Artesia; in Orange County in Anaheim and Irvine; in the Inland Empire in Rancho Cucamonga and Ontario; and here in the San Gabriel Valley in West Covina…and right here in Alhambra.

I’ve been to many, though not all of the branches, and this is the first I’ve come across that’s an actual SoCal-style drive-thru.

As drive-thrus often go, during a recent visit there was a long line of hungry locals, waiting for their chances to speak to the drive-up ordering thingy, and then continue to snake around the building till they get to the window out of which their bag o’ chow will come.

Admiring the length of the line, I trudged around this free-standing structure on the edge of sprawling mall dominated by a 99 Ranch Market — with such edible options as Mr. Rice Yunnan Rice Noodles and Half and Half Boba Express — gazing in wonder at the domination of the scene by fried chicken that was born so far away.

It was a festive line of vehicles (they weren’t waiting for their COVID tests!) with lots of music coming from the cars. I was snapping a few photos with my iPhone when a dude in one of the cars called me over — and asked me to take a picture of he and his lady friend waiting for their chicken. Which I did. And then sent it to his phone to cherish and share with friends and family. Along, I trust, with the chicken. Jollibee is like that.

There are more than 1,200 branches around the world, including 28 here in California. This isn’t just a Filipino version of KFC. If anything, it’s a Disneyland reinterpretation. Only in this case, rather than there being a mouse…there’s a bee.

You’ve heard the expression “cute as a bee’s knees”? Well, here, the whole darned bee is cute — with a bright, winning smile and eyes that twinkle, in a cartoon sort of way. And not surprisingly, Jollibee comes with a backstory that’s right out of Horatio Alger — a real rags-to-riches tale of success.

It goes back to 1975, when Tony Tan Caktiong and his family opened an ice cream parlor in the Cubao section of Quezon City. They were poor Chinese immigrants, with a talent for feeding people. And that talent evolved into hot food to go, and sandwiches, along with the ice cream. By 1978, the hot food was so popular, the ice cream was discontinued. Crispy, crunchy hot chicken became the dish of choice, under the name Jollibee — a cutesy logo that quickly became one of the most recognizable mascots in the Philippines.

By the end of 1978, there were seven branches in Metro Manila, with the first franchise opening in the Santa Cruz section of Manila in 1979.

The first McDonald’s opened in the Philippines in 1981. But by that time, Jollibee was so well established as a local special, nothing could dislodge it from the top of the local fast-food mountain.

And that mountain consisted of a growing world of new dishes — each with its own mascot. Along with Jollibee, the Chickenjoy combination plates were represented by Chickee. The milkshakes by Lady Moo. The Yumburger by Mr. Yum. The sundaes by Twirlie. The french fries by Popo. The Jolly Spaghetti by Hetty.

The Jollibee chain inundated the Philippines with “cute.” And that “cute,” being local, was embraced, adored, loved — and by 1986 was spreading abroad, around the world. It was a taste of home for Filipinos overseas, one that made Tony Tan Caktiong a billionaire. And a visit to the Alhambra branch makes it easy to understand why.

The bee is everywhere! On drink cups! In profile on wallpaper — so recognizable, facial features aren’t even necessary! On tubs of chicken parts, ranging in size from individual, to extended family! In an oversized Jollibee statue in front of the restaurant, gesturing you in! (And it should be noted that, like Mickey, Jollibee wears white gloves, with a thumb and three fingers. Along with oversized yellow shoes. And a bowtie!)

How’s the chicken? It’s, as the wallpaper tells us, “Crispylicious” and “Juicylicious.” The breading doesn’t stay crunchy for long, so it’s best to dig in while the chickenjoy is fresh from the deep-fryer — a tasty crust, properly moist chicken within, with a hint of pepper, but surprisingly little spice for a Filipino object of desire.

For a nation known for hot and hotter, this is user-friendly for a world of tastebuds. The simplest of the meals — the two-piece Chickenjoy with one side — comes with a choice of french fries, mashed potatoes, buttered corn, steamed rice, and the option of a side of gravy, which is kind of salty, and kind of not necessary.

There’s the option of adding an order of Jolly Spaghetti, which one online site refers to as “Legendary.” I guess. It mixes spaghetti with ground meat, sliced ​​hot dogs and a sweetish sauce made from banana ketchup. It tastes like something a 6-year-old might make, by adding random items from the fridge. It’s a major party dish in the Philippines, and, well, it’s filling.

The most interesting of the Yumburger selections is the Aloha — which is topped with a slice of pineapple. But then, I don’t go to Jollibee for burgers. Maybe for Jolly Spaghetti, but not hamburgers. I’m mostly here for the chicken. And, frankly, the Bee. I can’t resist cute anymore than the rest of us.

I treasure the Mickey memorabilia from my first visit to the Magic Kingdom lo’ these many years ago; I still have my Mickey hat, with my name stitched on it. I’m tempted to get one of the many Jollibee t-shirts. The ones with the Bee on them are nice. But there’s one that says, in lower case: “yumburger&chickenjoy&burgersteak&jollyspaghetti.” It’s so peculiar. And tasty too!