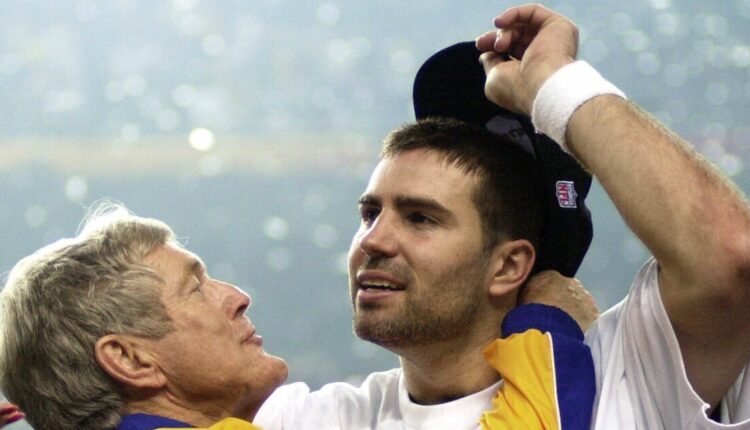 Dick Vermeil, who Saturday will be enshrined in the Pro Football Hall of Fame, considers himself a connoisseur of coaches.

He worked with so many greats during his 46 years in football, among them 29 who either had been, were currently or would become NFL head coaches. Three of those wounded up in Canton — Sid Gillman, George Allen and Bill Walsh.

But one of the most influential coaches in shaping Vermeil was merely an observer of football — a fan, not someone who devoted his life to the game.

It was John Wooden, who was just wrapping up his legendary career as UCLA’s basketball coach when Vermeil was the Bruins’ head football coach in 1974 and ’75.

“I tried to spend as much time around him as I could without bothering him,” said Vermeil, 85, who also was a UCLA assistant coach in 1970. “I actually brought coaches into his staff meetings so they could watch them too.”

UCLA coach Dick Vermeil is carried from the field after the Bruins beat Ohio State in the Rose Bowl, 23-10, on Jan. 1, 1976. His success in Westwood led to another success story in the NFL.

“The glaring thing that happened, and it reinforced my thinking for the rest of my career, is one day I stopped in to see him, sat in a chair in his office, and he said, `You’re looking down,’ ” Vermeil recalled. “I said, `Well, I just lost a couple of good players to USC.’

“He told me, `Listen here, coach. USC is always going to have better players. Don’t worry about that. You just make sure you make every player on your roster the best he can possibly be, and everything else will take care of itself.’ ”

From anyone else, that might have been a platitude the minute Vermeil walked away. But that it came from Wooden, whose teams won 10 national championships in a 12-year period, made those words droplets of gold to a young and impressionable football coach.

“From that time on, with every job that I’ve had, that’s been a foundation statement that rings in my mind,” Vermeil said. “I coached by it.”

The two struck up a friendship that lasted throughout Vermeil’s career, which included stops with the Los Angeles and St. Louis Rams — including a Lombardi Trophy — the Philadelphia Eagles and Kansas City Chiefs, and into his retirement.

“After I was done with coaching, I remember going over to have breakfast with him, then going back to his condo,” Vermeil said. “We talked as friends, philosophy. I still have my notes of my meetings with him, and I may even have recordings from those meetings we had with our coaches.”

That’s a hallmark of Vermeil’s coaching career; he was a sponge, always looking to learn and grow and improve. He had a 15-year hiatus from coaching, from when he retired as coach of the Eagles at the end of the 1982 season until he became head coach of the St. Louis Rams in 1997 — something of a reunion, as he had been LA Rams assistant coach in the early 1970s.

During those 15 years, he wasn’t truly away from football. He worked as a sports commentator for CBS and ABC, and stayed very up-to-date in the game.

“One of the things that really helped me was I was on the field with a real good football coach every weekend,” he said. “When I’d come into a team, I’d get an open door. I’d sit in coordinators’ meetings, head coaches’ meetings.”

As a former head coach, Vermeil was a member of the club. He got access where others from the TV world simply didn’t. 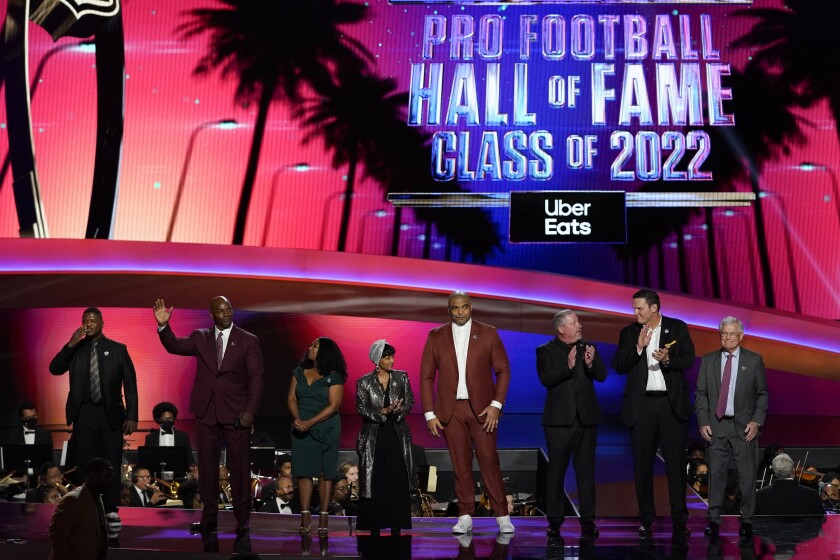 The 2022 Pro Football Hall of Fame class at the NFL Honors show.

“I’d be with Bill Parcells in his first year,” he said. “Then I walk on the field and spend a whole day with Don Shula, going to practices, team meetings. Lousy facility. You talk about a general? I’d describe him as Eisenhower or MacArthur or Patton. Probably a combination of the three.”

He said he worked so many Washington games during his TV career, he felt as if he were on the staff of Hall of Famer Joe Gibbs. Then, there were the college coaches.

“Tommy Prothro was a brilliant man,” Vermeil said of the UCLA coach who appointed him offensive coordinator in 1970. “He created a great environment for coaches to coach in. I got to work with Chuck Knox, and he said something to me that stuck with me for the rest of my career.

“One day I came off the field and I was complaining about what my running backs couldn’t do. And Chuck said, `Listen, Vermeil. If they could already do all those things you’re complaining they can’t do, I wouldn’t need you to coach them.’ ”

Asked if there were a coach he wished he could have worked alongside, Vermeil said he would have loved to have been an assistant on Tom Coughlin’s staff.

“I watched him coach Boston College,” Vermeil said. “He leaves college football, takes over an expansion franchise in the NFL [Jacksonville] and takes them to the conference championship game right away.”

Hall of Fame quarterback Kurt Warner, who helped guide St. Louis to that Super Bowl victory in the 1999 season, said he marvels at the way Vermeil left coaching for 15 years then seamlessly transitioned back into the job with an entirely new generation of players.

“Knowing what he did in Philly, and then knowing the adjustments he had to make when he came back a decade-and-a-half later, he changed the style in which he coached,” Warner said. “His ability to deal with the new-age player, and to have the success he had, just speaks volumes about Dick Vermeil.”

As for Vermeil, he would love to be able to speak volumes from the lectern Saturday. But, as with the other inductees, he’s limited to eight minutes. That’s a tall order for someone whose thank-you list is as long as the rolling credits in “Star Wars.” On top of that, he’s famous for the emotions that well in him and the tears that so easily fill his eyes.

He might have to pause a bit. But of all people, Vermeil — he of the 15-year hiatus — understands how to come back and finish strong.

As Wooden might advise him, he’ll be quick but won’t hurry.

Alyson Hannigan Finds Buyer for $18 Million ‘This is Us’ House