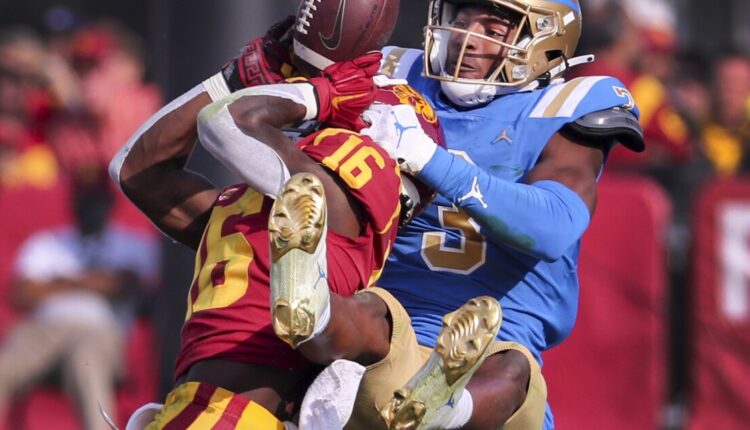 Is UCLA nearing the goal line on a move to the Big Ten, or might its plans be foiled by an all-out blitz?

Concerned about the Bruins’ hasty exit from the Pac-12, the University of California system leadership on Wednesday proposed new rules that could limit campuses from making major decisions involving athletic contracts on their own.

Far more concerning for UCLA, two UC regents and the general counsel of the UC system suggested there might be an avenue to block the Bruins’ move that had widely been considered a fait accompli since it was announced in late June.

“It’s important to understand that when the regents delegated authority to the president, they didn’t give it away or lose it,” UC system attorney Charlie Robinson said Wednesday during a regents’ meeting at UCLA’s Luskin Center. “Essentially, what they did was extend it such that authority was with the regents and the president.”

After the end of a closed session spanning more than an hour, Regent John Perez told The Times that the regents retained the power to block UCLA’s move.

“All options are on the table,” he said.

Did that mean options could be pursued that would prevent the Bruins from joining cross-town rival USC as the newest members of the Big Ten starting in the summer of 2024?

“All options are on the table,” Perez repeated, “up to and including that. … We’re going to look at what all the different options look like and then the board will assert itself in terms of what it’s desired outcome is.”

It had been widely assumed that a 1991 UC system policy that delegated authority to campus chancellors to execute their own contracts, including intercollegiate athletic agreements, would provide leeway for UCLA chancellor Gene Block to unilaterally green-light his school’s conference switch.

Not so, Robinson told the regents inquiring about their options.

“One mechanism would be for the [regent] board chair to say, ‘I’m directing you, in this instance, to stand down,’ ” Robinson said, “and the board will be exercising authority in this area.”

Richard Leib, the chair of the board, affirmed his power after the end of the meeting.

“We always have the ability to retain authority,” he said, “which is what we heard today.”

The question is whether Leib would try to exert that authority given that many believe UCLA’s move to the Big Ten would represent a net plus for the UC system.

Asked if he favored scrapping the deal, Leib told The Times it was “premature” to make that decision or evaluate whether other regents would support that move. Although several regents voiced concerns about the impact on the health and academic performance of student-athletes due to longer travel times, Leib said they could be mitigated. The use of more charter flights, for instance, would be less strenuous than commercial flights, he said.

An interim report, discussed during the regents meeting, recommended potential limits on the UC president’s ability to delegate decision-making authority to campuses on such issues as athletics affiliations or conference memberships in certain cases. They include those that would have a significant adverse impact on other campuses in the UC system; raise major issues involving university policy; or could create significant risk of reputational harm to the university or any UC campus.

The regents voiced concerns about UCLA’s unilateral decision, which essentially excluded them from the process, and are expected to vote on the proposal to change the delegation of authority in similar situations during their September meeting.

The UC proposal would also require the university president to give advance notice of major athletics decisions to the board chair and chair of the committee with jurisdiction over the matter at hand. Those leaders would then decide if the matter should go to the full board for discussion.

The report released Wednesday also revealed that USC’s move to the Big Ten would represent an estimated loss of roughly $9.8 million in annual media rights for each of the remaining Pac-12 campuses given the Trojans’ status as a football viewership juggernaut; it suggested that UCLA’s departure could lead to another loss of roughly one-third that figure as well as the additional loss of ticket and apparel sales for remaining Pac-12 teams.

Among the nine UC campuses, the report declared that only UC Berkeley expected to experience a significant impact from UCLA’s departure.

Assessing the impact of UCLA’s move on the well-being of its athletes, the report showed that eight sports would experience significant travel consequences — baseball, men’s soccer and men’s tennis, plus women’s soccer, softball, gymnastics, women’s volleyball and women’s tennis. According to Pamela Brown, the UC vice president of institutional research and academic planning, teams could experience as much as an additional 24-hour difference in the time commitment for a Big Ten trips as opposed to ones in the Pac-12.

Sam Andress, who identified himself as a longtime supporter of UCLA’s athletic department, said during the public comment portion of the meeting he supported the Bruins’ move and questioned the relevance of its impact on a rival.

“I find it a little bit shocking and unconscionable that you would expect fans, donors and alums to really look at what it meant for the campus up north,” Andress said, referring to Cal. “…I think it’s going to be a net positive for Los Angeles and the UCLA community.”

The regents directed UC to conduct the review after Gov. Gavin Newsom demanded more transparency about the details of UCLA’s plan to leave the Pac-12 for the Big Ten in August 2024. Among other things, Newsom wanted to know the impact of the move on UCLA athletes given the increased travel associated with competing in a coast-to-coast conference as well as the financial fallout that would result from Cal being left behind in a diminished Pac-12.

Newsom did not attend the regents meeting Wednesday.

Last month, Leib said UCLA engineered its Pac-12 departure quietly, informing UC President Michael V. Drake about discussions with the Big Ten but informing a “handful” of regents only shortly before the decision was announced.

Switching conferences is expected to significantly improve UCLA’s athletic department finances while increasing the size of its recruiting base and enhancing its brand in a rapidly shifting college sports landscape. Before a recent court settlement with Under Armour, the Bruins’ athletic department was saddled with a record $102.8-million deficit. UCLA also faced the prospect of cutting Olympic sports teams in the years to come had the school remained in the Pac-12, whose revenue has fallen well behind that of its counterparts in other parts of the country.

With the addition of the Los Angeles television market thanks to the presence of USC and UCLA, the Big Ten is finalizing a media rights deal that could fetch a record $1.5 billion annually. The conference’s media partners are expected to include CBS and NBC in addition to Fox, which has been a longtime carrier of Big Ten games.

UCLA scored another victory late last month when it secured a $67.49 million settlement with Under Armor after having sued the sports apparel giant for breach of contract when Under Armor aborted the remaining years on a record $280-million deal. The school is expected to use the windfall to help pay down its debts.

Cal’s athletic department also is wiggling out of a financial bind. The Golden Bears completed the 2021 fiscal year with a $3.5-million surplus only after reportedly receiving $39 million from outside sources, including a $20.1-million check from the university to help cover expenses. Campus officials are also bailing out their athletic department by covering 55% of the annual $20 million in debt service on the school’s football stadium renovation, according to the San Jose Mercury News.

Cal’s finances figure to become even more strained in the years to come given the defections of the LA teams unless the Pac-12 holders can find a way to fortify themselves, possibly with new members. The Pac-12’s new media rights deal will take a significant hit without USC and UCLA drawing viewership from Southern California.

That is, of course, if the Bruins can formally join their longtime nemesis as part of this seismic shift in the college sports landscape.