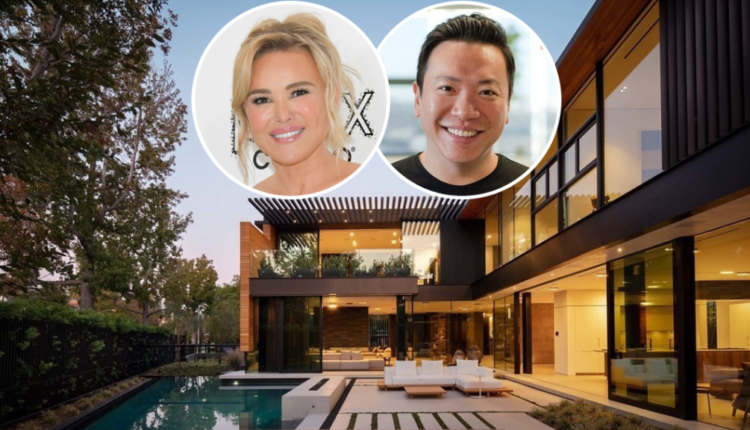 But stalwart “RHOBH” fans expecting to be invited into those two homes have been so far sorely disappointed, because the house Jenkins displays on the show is clearly not either of them. Instead, the Bosnian entrepreneur and philanthropist is frequently shown waltzing around in a glassy Beverly Hills home — where in late 2021 she threw a huge Christmas bash that was music-flooded, drama-filled and heavily televised, naturally.

That rented house, as a number of enterprising viewers have already discovered, lies in prime Beverly Hills Flats — thereby making Jenkins perhaps the only “RHOBH” cast member that actually lives in the city of Beverly Hills, however brief her stay. The reasoning for the pricey lease is that Jenkins was remodeling her new Hidden Hills pad during the time of filming, though that construction is now completed.

And yes, this place was pricey. Spec-built in 2019, the nearly 11,500-square-foot mansion last sold in September 2021 for $17.4 million to tech entrepreneur George Ruan, the cofounder of online coupon-clipping app Honey. After acquiring the keys to his new home, Ruan almost immediately put the place up for rent; it’s not clear what Jenkins agreed to pay, but the house was last listed for a whopping $125,000 per month.

If the mansion looks vaguely familiar, it’s probably because Chrissy Teigen and John Legend also leased the very same property back in 2020, prior to Ruan’s purchase. During their brief stay, the publicity-friendly couple put nearly every inch of the property on public display, flooding their respective social media accounts with photos and videos.

Home highlights include six bedrooms and a total of eleven bathrooms—eight full baths and three powder rooms. The very open floor plan features a Boffi kitchen with state-of-the-art Gaggenau appliances, dual living rooms bisected by a marble fireplace, a movie theater, floor-to-ceiling glass wine closet, a master retreat with its own fireplace, dual closets and private terrace, a fitness center and wet bar that wouldn’t look out of place in a five-star, ultra-boutique hotel.

Jenkins moved into her newly redone Hidden Hills estate earlier this year, so lucky fans may finally catch a glimpse of that lavish spread. As for Ruan and his longtime wife, they’ve moved into the Beverly Hills home Jenkins just vacated, where they are currently living while awaiting the sale of their much larger, $150 million Bel Air mega-mansion.