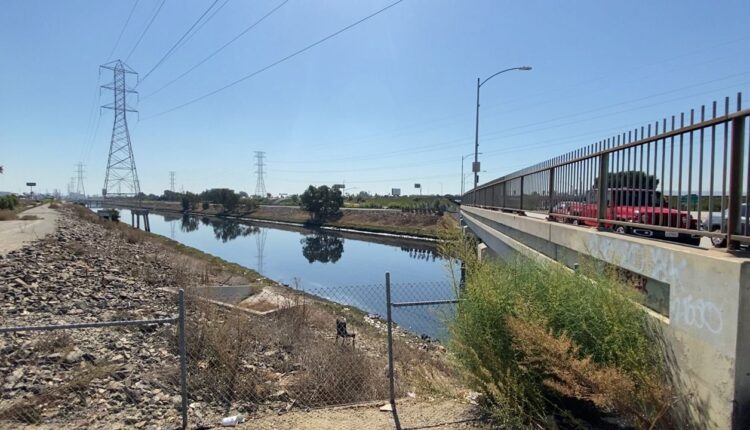 CARSON, Calif. (CNS) – Los Angeles County announced Friday “drastic reductions” in the amount of hydrogen sulfide gas leaking from the Dominguez Canal, but even small concentrations of the gas continue to cause nuisance to nearby communities.

Thousands of residents of Carson, West Carson and parts of Gardena, Torrance, Redondo Beach, Wilmington and Long Beach have reported the noxious rotting egg smell caused by organic matter decaying in the canal. Many complained of headaches, sore eyes, nausea and other ailments.

But even at low concentrations, hydrogen sulfide gas creates a smell like rotten eggs, Pestrella said.

“I was on the station yesterday and I confirm firsthand that the smell is still very annoying,” Pestrella said during an online media briefing.

Jason Low of the South Coast Air Quality Management District said about 75% of calls for odor complaints were from Carson, but officials continue to receive calls from Long Beach, Gardena, Wilmington and other neighboring cities.

More than 2,939 residents have already requested reimbursement of related costs, Pestrella said. Refunds have been approved for 857 people, but Pestrella said Public Works will now notify people within 24 hours if their requested purchases can be refunded in response to the smell. Twenty-six households have been accommodated in three hotels, and air purifiers are available for collection at Victoria Community Regional Park at 419 Martin Luther King Jr. St., Carson.

Pestrella said the smell came from a natural process of anaerobic digestion of vegetation that naturally releases hydrogen sulfide. To mitigate the odor, Public Works sprays Epoleon, a natural, biodegradable spray that mitigates the hydrogen sulfide odor by converting the gas into a by-product of salt, which the county removes in a separate process.

Crews sprayed into the canal from overpass bridges flood in, “to maximize exposure and the effect of the spray,” Pestrella said. The goal is for the tides to move the neutralizing spray further upstream to the rest of the creek, and the county can use drones to keep spraying along the canal.

Public Works is also installing bubblers at the bottom of the canal to force air into the water and increase oxygen levels. The process will help eliminate the production of hydrogen sulfide gas.

“To put it simply, the faster we reduce levels of hydrogen sulfide, the faster the public will be freed from this nuisance,” said Pestrella.

Public Works will also use light at night to fight the bacteria it believes are sensitive to light, Pestrella said. Officials are also considering dredging the canal, but that would be a complicated month-long process. He said great care had to be taken to avoid separate environmental problems caused by other chemicals released from the canal. If the canal had to be dredged, it would take about five acres of water to drain, which is about five rose bowls a foot deep.

Los Angeles County’s board of directors voted Tuesday to step up support for residents of Carson and neighboring communities suffering from the stench. Supervisors Holly Mitchell and Janice Hahn jointly drafted a motion calling on the Department of Public Works and the County CEO to do whatever is necessary to provide rapid relief to residents, including direct distribution of HEPA air filters and filter units , issuing hotel vouchers and reimbursing cities for deliveries and hiring a third party to manage and reimburse aid supplies.

The county health department and Carson City Council have called the offensive odor a “public nuisance.”

The health department updated its recommendations on Tuesday for residents affected by the smell, saying they should avoid prolonged outdoor activities between 9:00 p.m. and 8:00 a.m. based on patterns observed in the results of the aerial surveillance, and reduce exposure to strong odors.

The department also recommended keeping pets indoors and taking them to the vet if they look lethargic, have difficulty breathing, or vomit.

Dr. Muntu Davis, the county health officer, asked Friday to reassure parishioners that at the current levels of hydrogen sulfide, symptoms are likely to be temporary and reversible.

On October 12, DPH informed residents that they would be reimbursed reasonable expenses, including the cost of certified HEPA portable room air filters or temporary moving expenses to avoid negative health effects.

Public health officials also urged residents with “persistent, worrying, or worsening symptoms from the smells” to call their health care provider, particularly if they have chronic health problems.

Schools in the area were also encouraged to exercise discretion in outdoor activities by students.