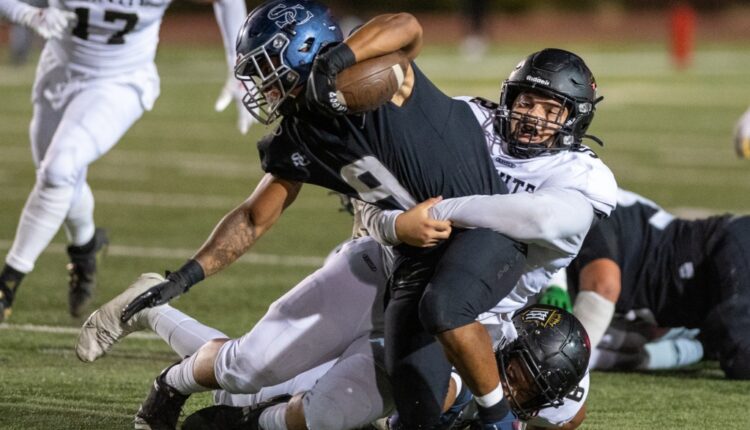 Sierra Canyon’s efforts are admirable. Not only do the Trailblazers call themselves a world-class Southern California high school football program, they also play in games that prove their pursuits are legitimate.

Coach Jon Ellinghouse plans games that no one else will take, even if that means the program will suffer one-sided losses that it is not used to. In the spring, Sierra Canyon traveled to St. John Bosco and lost 42-21. Two weeks ago it was a 35-14 loss to Corona Centennial. Friday night there was a 44-22 loss to Servite at Pierce College live on the Bally Sports Network.

If you delve deeper into the Sierra Canyon (2-2) goals you will see how difficult it really is. In fact, there has only been one San Fernando Valley team to win a championship in CIF Southern Section Division 1 (or the highest division).

It was Crespi’s 1986 team. The Celts defeated St. John Bosco 49-14 at Anaheim Stadium in the Big Five championship, the top division of the time. The current Servite head coach Troy Thomas was on the team.
Servite head coach Troy Thomas will watch the video playback with his team at Pierce College on Friday, September 17, 2021. (Photo by Michael Owen Baker, Contributing Photographer)

Thomas not only experienced the title win as a player, but also has experience in two different stints trying to do what Sierra Canyon is now doing as a coach at Crespi. There is perhaps no one better than Thomas to give a glimpse of how difficult the Sierra Canyon’s journey to the summit – from the valley – really is.

“The San Fernando Valley has always been known for skill and speed,” said Thomas on Friday evening. “The biggest difference has always been the size in advance. Trinity League teams and programs like Corona Centennial are superior. ”

Looking at the field ahead of Friday’s game, Thomas was impressed with the size of the Sierra Canyon, but the second comment he made on his finding was perhaps the most important.

“Sierra Canyon is on the way, they are on the right track,” said Thomas. “But these big games are new to her. You have to keep playing these great games, and they are. You won’t win them at first, but once your players get used to playing and participating in these games, you will win them. ”

Since 1986 only one other team has reached a top division final. It was Crespi again in 2007 but lost to Long Beach Poly 13-3 in the Pac-5 final. Few local teams have fought for a place in the top division in recent years: Chaminade, Oaks Christian and Calabasas.

Sierra Canyon, the reigning Division 2 champion, isn’t the only local program trying to break through. So is Alemany (1-3). But it’s likely that Warriors’ Division 1 playoff hopes were dashed in a disappointing 30-7 loss to Mission Viejo at home on Friday night.

The game on Friday was riddled with penalties, wrong decisions and, according to several reports, a large portion of indifference. One of Alemany’s top prospects, Larry Turner-Gooden, wasn’t in the game but was on a recruiting trip to Penn State.

Although Alemany and Sierra Canyon suffer losses against teams that live in the same air, the Trailblazers are eons ahead of the Warriors in my eyes.

The difference shows the playoff time. Sierra Canyon is likely to claim a playoff spot in Division 1, but will likely face Mater Dei, St. John Bosco, Servite or Corona Centennial in the first round. Alemany’s only chance – no matter how slim – is to have an undefeated Mission League campaign and have a boat race with every team. So far, all the signs show that this is not going to happen.

Sierra Canyon were beaten 128-57 in their three games against St. John Bosco, Centennial and Servite, which included a 38-0 deficit in the third quarter. It wasn’t exactly fun for the Trailblazers, but they keep getting up and looking for their closest opponent.

This Friday it will be Norco (4-0), who is currently number 7 in the state.

“These are games we want to play in,” said Ellinghouse. “But we are not playing for moral victories in them.”