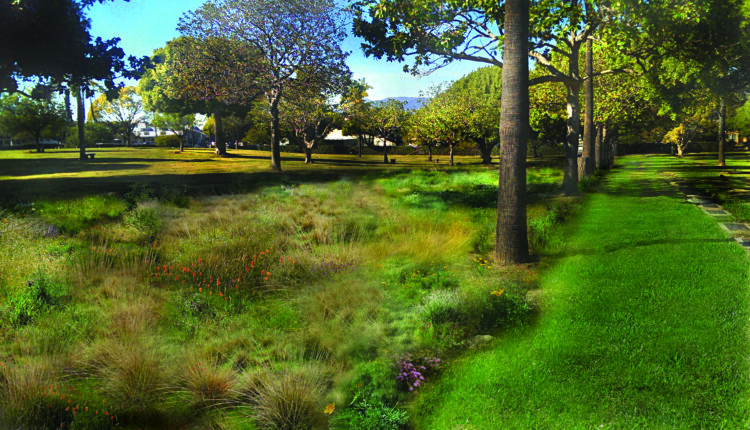 Woodlawn Cemetery, Mausoleum & Mortuary has served the community for over 100 years. It is wholly owned and operated by the City of Santa Monica – one of the few community-owned cemeteries and mortuaries in California. Juan Carrillo, a member of one of Santa Monica’s founding families, bequeathed the cemetery to the city in 1897. The city bought the mausoleum in 1976. Located on 26 acres in the heart of Santa Monica, Woodlawn is considered one of the city’s most important historical resources.

The mausoleum, located on the cemetery grounds, captures the architecture of early Spanish California. It was built in the late 1920s and is one of the first public mausoleums in California. The corridors are decorated with exquisite imported marble and granite from Italy. The mausoleum’s magnificent stained glass windows are breathtaking. The rotunda walls of the mausoleum are adorned with large colorful tapestries painted by the famous artist Hugo Ballin, who is buried here in Woodlawn Cemetery. The memorial wall is right behind the south entrance of the mausoleum. Built in 2014, the memorial honors the Santa Monicans who served in one of the country’s military branches and died while on active service during the war.

Woodlawn was officially designated a monarch butterfly habitat in 2015 by Monarch Watch, the leading conservation organization for the critically endangered butterfly. In 2016, Woodlawn became one of three cemeteries in Southern California to offer green / natural burials when Eternal Meadow was added. In the case of green / natural burials, only decomposable materials such as wooden or wicker coffins without metals, organic grave cloths or biodegradable urns are used. No embalming fluid, which contains toxic substances such as formaldehyde, is used, and there are no cement vaults. Eternal Meadow is made up of native California grasses and wildflowers and is home to native birds and pollinator insects such as the monarch butterfly. Green burial promotes the meadow’s growth cycles, promotes a stronger connection with nature, and is a meaningful way to honor the life of a loved one.

Woodlawn is the final resting place of more than 54,000 people. Even in the most difficult of circumstances, families find Woodlawn a pleasant place to reflect and honor loved ones. Whether you are here to celebrate life through one of our special programs, ready to plan your future, or have lost a loved one and are in a time of need, Woodlawn Cemetery, Mausoleum & Mortuary is there for you .