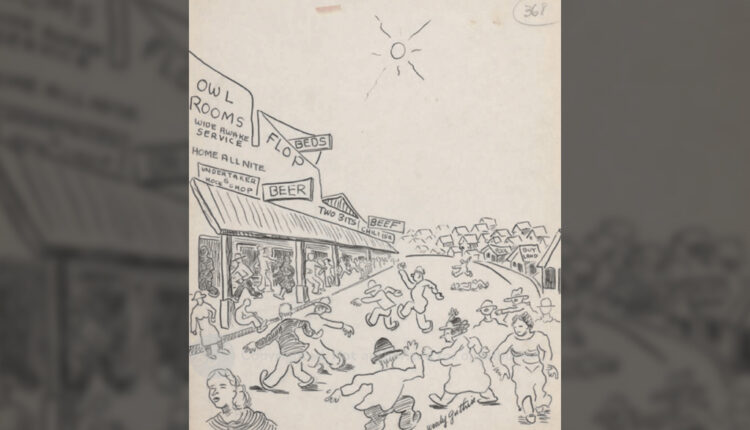 Fifty years after his death, “the sad truth” about the great American troubadour, social activist and iconic songwriter Woody Guthrie, “is so much of what Woody wrote about – racism, economic inequality, the un-American treatment of immigrants, war, Corruption caused by rampant capitalism – is still very present today, ”wrote Robert Santelli in his introduction to the recently published tome“ Woody Guthrie: Songs and Art * Words and Wisdom ”. (Chronicle Books, 346 pages, $ 40)

It is “curated” by his daughter Nora Guthrie. A visually stunning record of his work in his own words and in his own hand, it is a thematic archive of his handwritten and typed diaries and song lyrics, as well as personal photos. I found Woody’s artwork surprising and impressive. I never knew he could draw. It reminded me of James Thurber. I suspect it was the inspiration for Bob Dylan who adored Woody to start sketching and painting during his tour. Dylan got quite knowledgeable, and a few years ago I saw an impressive gallery exhibition of his work in Bergamot. (You know, that silly old arts center we’re going to trade in for apartments and a hotel.)

Yes, his song about Donald Trump’s infamous racist slum lord father Fred Trump is here, written while his family lived in one of Fred’s Brooklyn apartments. It’s a shame that he probably didn’t know that The Donald’s grandfather Frederick had been kicked out of Germany for conscientious objection and tax fraud. Hm. Could have added a verse or two entirely different.

EM THE MASTER – I HAVE HIGHLY RECOMMENDED EM’s show for months and I still do. “The master”? Too much hype in the marquee? Not if you can back it up, and em will. She sings, dances, has dancers. She crawls across the floor like a reptile, grabs the microphone and never misses a beat. She doesn’t play the piano, she attacks it. Use your voice as an instrument in a creative way. Your energy is uninterrupted and seemingly limitless. Writes great songs that fit her act perfectly, and she may remind you of a more energetic Lady Gaga. Every Tuesday 9:30 p.m., Harvelle’s, DTSM, $ 10.

LA OPERA presents ROSSINI’s “CINDERELLA” – What’s up? In the same week we have opera twice in kindergarten. What happened to cosmic questions? The human condition? Storm and stress? In all honesty, I’m a little tired of allowing stories based on the antiquated morals of the 18th and 19th centuries that seem just silly in the 21st century. What’s wrong with comedy with your great music and spectacular sets? And comedy performers are not easy. What’s wrong with telling the story of the poor Cinderella who defies her imposed social status and wants to grab the hottest guy in the kingdom and live happily ever after? With all of the screen time lately for Princess Diana, another who wouldn’t settle for her imposed status, it is actually about the time. Sat 7:30 pm, Dorothy Chandler Pavilion, DTLA, $ ​​18-282.

PACIFIC OPERA PROJECT presents HANSEL UND GRETEL – A few years ago LA Opera did H&G and I had some concerns, I mean really, a children’s fairy tale, not the heavy moral issues that opera usually tackles? But it was great and fun, and I expect the POP to deliver their own unique brand of the genre, sung in English, family friendly, outdoors in Forest Lawn Cemetery, it’s the perfect introduction to opera for kids and adults alike who behave like children about opera. Being directed by co-founder Josh Shaw is a huge plus. The gates will open at 4:00 p.m. and table spaces will be available for picnics before and during each show. Free parking spaces available. Sat, Sun 5 p.m. Forest Lawn Glendale, $ 10-125.

BONEDADDYS – They were already a favorite LA band when I moved here in 1980. Difficult to classify or even to describe what they play, but try it out on their website here: “Funk, Rock, Blues Mambo, Soca, Latin, Rock – steady and psycho-billy-two-step to an afro-surf -Twang meets spaghetti western instrumental. ”Lots of bands throw around eclectic labels, but The Bonedaddys have been perfecting it all for 40 years. A fluid line-up of course, and some members have spun off to form other local legends like I See Hawks in LA and Burning Sensations (“Belly of the Whale” and one of the best band names of all time), but have been founders for so long Mike is Tempo Percussion, you are good. There’s a saxophone there too, so I’m expecting … bonedaddys and that’s a good thing. Sun 8 p.m., Venice West, $ 10.

THE TOLEDO SHOW – There is little in this life that you can rely on, especially in the world of live music, but two of them are Toledo Diamond: 1) Show up at Harvelle every Sunday evening for 20 (!) Years , and 2) put on a great show. I’m now in my fourth decade, entertained by The Toledo Show, which dates back to its beginnings outside the Sunset Strip, and the show and its band have only gotten better over the years. Every Sunday 9:30 p.m., Harvelle’s, DTSM, $ 12.

Charles Andrews has heard a lot of music of all kinds, including more than 2,000 live shows. He has lived in Santa Monica for 34 years and would not live anywhere else in the world. For real. Send him love and / or rebuke to [email protected]