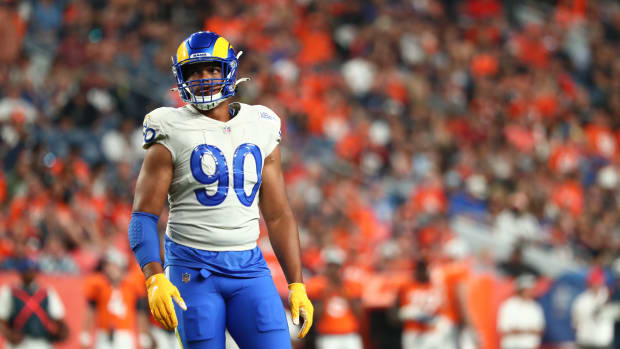 In the days following the Los Angeles Rams’ Super Bowl LVI win, some of the team’s players had another reason to celebrate, including former Northwestern Wildcat Earnest Brown IV.

Brown is one of 13 Rams players that the team signed to reserve/future contracts this season, Los Angeles announced Feb. 15. These agreements will go into effect March 16, the start of the 2022 NFL League Year, and count against the team’s 90 -man roster limit for the upcoming season, according to Bleacher Report.

This means the Rams see potential in Brown, a defensive lineman who spent the 2021-22 season proving himself on the practice squad. And if history is any indication, this is just the beginning of Brown’s journey in the pros.

“I feel like people have their times,” Brown told Wildcats Daily ahead of the Super Bowl. “My time is going to come. Shoot, I started at Northwestern for one year and I got drafted to the Rams who are now going to the Super Bowl. That’s such an honor, so I don’t take being on the practice squad lightly at all. I see it as a blessing, because not many people get this opportunity.”

Unlike many NFL players’ pasts, Brown’s collegiate career did not necessarily indicate a future in the league. Though he took the field with the Wildcats as early as his freshman year, he did not make his first start for Northwestern until the team’s 2020 season opener. That year, Brown recorded a season-high 32 total tackles, bringing his career contributions to 70 total tackles and 7 total sacks.

Brown said his experience climbing the depth chart in Evanston taught him patience, and the advice Northwestern coaches gave him then still resonates today: “Be persistent. Be consistent with everything you do. Don’t give up, because you never know what happens.”

Los Angeles selected Brown in the fifth round of the 2021 NFL Draft. Two rounds later, the team also drafted former Wildcat Ben Skowronek, a wide receiver who left Northwestern after four seasons to complete a graduate year at the University of Notre Dame.

Brown and Skowronek both appreciated seeing a familiar face on the team during their first season of the league.

In Los Angeles, both rookies have trained with some of the NFL’s most talented players: Skowronek learning from Super Bowl MVP Cooper Kupp, and Brown from 2020 NFL Defensive Player of the Year Aaron Donald. The young defensive lineman has taken the opportunity to study the team’s veterans and apply the observations to his own game.

“It makes you become a better player, learning step by step what they do and how they think,” he said.

Brown’s teammates have also given him guidance on life outside of football. His reserve/future contract may secure him a preseason position with the Rams, but he has already started looking far beyond that, making the most of his time in the league by preparing for whatever is next.

“You never know when the NFL is not going to work out for you — it could happen tomorrow,” he said. “So just meet new people, make connections, build from that, and you’ll be set for life.”