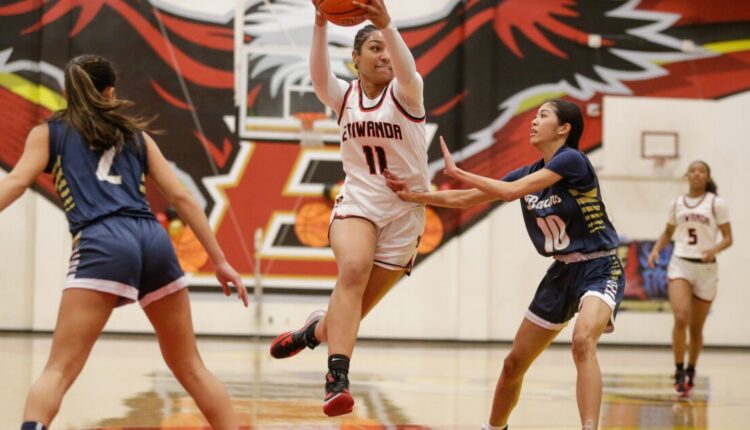 Hearts pumping, blood rushing through their veins in the locker room before a game, the Etiwanda girls’ basketball players turn to prose.

Not song, not prayer. Each player on the Eagles carries a custom silver dog tag, perhaps clasped around their necks or dangling off their backpacks, all sporting the same word: “Invictus.”

Written by British poet William Ernest Henley in 1875, “Invictus” brings “good energy” and a sense of family to this Etiwanda team, sophomore Kennedy Smith said. In particular, they scream its last two lines before charging onto the hardwood for warmups:

“I am the master of my fate! I am the captain of my soul!”

The Etiwanda girls’ basketball team joins together to recite British poet William Ernest Henley’s short poem “Invictus” before the start of the game against Bonita Vista on Saturday. 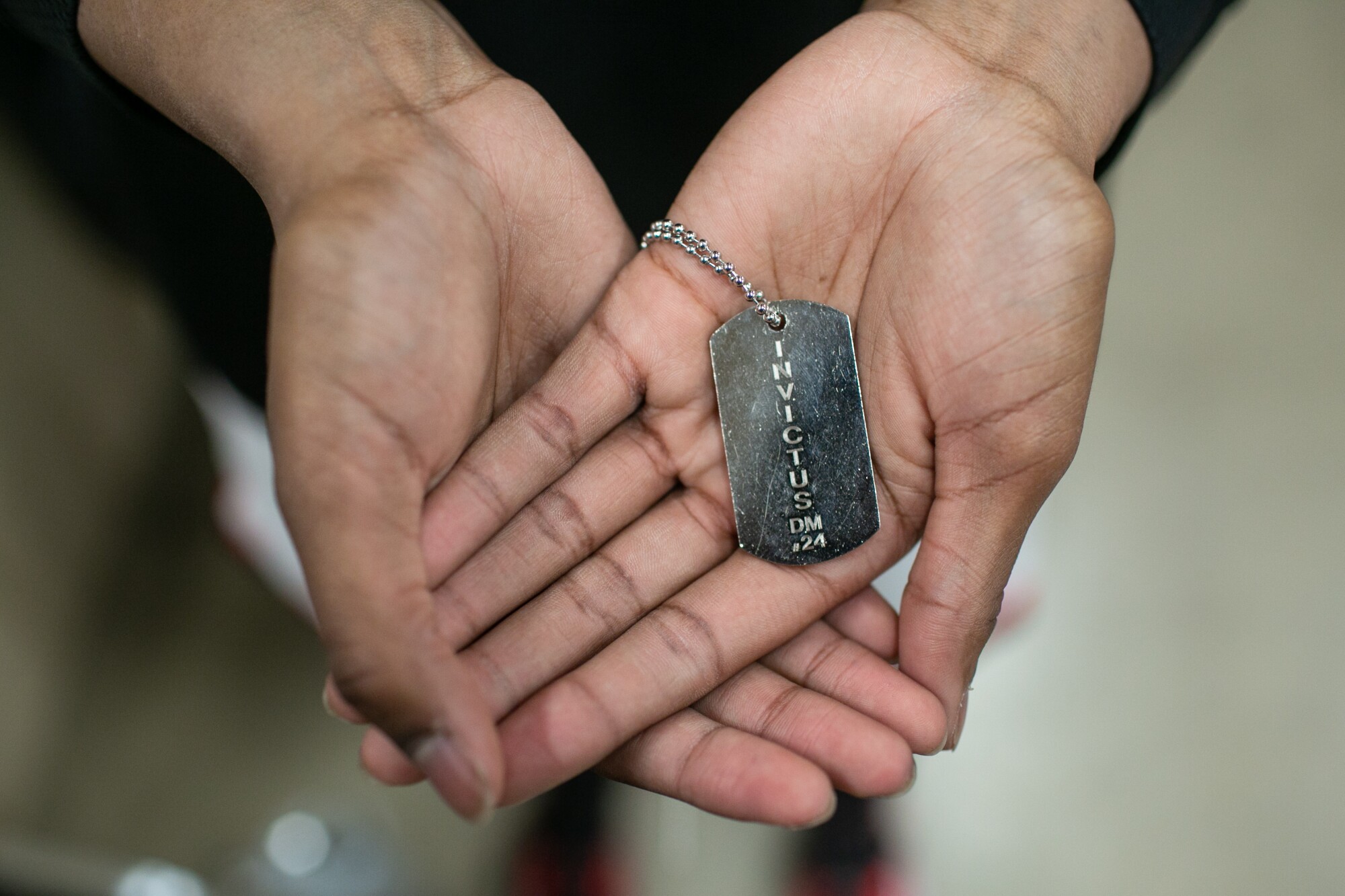 Learned in his college fraternity, Eagles coach Stan Delus has taught the poem to every team he’s coached for 20 years. This Etiwanda group, sitting at a cool 24-0, has taken it to heart during a season they hope ends with a state championship.

In this era of private-school dominance in Los Angeles and Orange counties, Delus is proud of his players for the visibility they’re earning as a public program from the Inland Empire. As the playoffs begin this week, the Eagles have mastered one particular fate — the road through the postseason will go through their area.

“Most people in the IE aren’t really famous,” Smith said. “We’re putting a name on the map.”

There’s a minute left to play, their team is up by 60, and yet the bench is still screaming.

Screaming, specifically, about the inbounds play. With the ball on the baseline, Etiwanda players aren’t in the right formation during this Jan. 28 game against Chino Hills. Doesn’t matter that the score is 88-24 — every player on the Eagles’ sideline is on their feet, clamoring at the girls on the court to get their attention.

It’s a starting level of focus about a minor detail, especially considering this team isn’t exactly full of grizzled veterans. The roster has only two seniors. But moments like this full-bench interjection have happened this season because of previous trials and tribulations.

“We went through some struggles,” Delus said. “It established a foundation for them to understand what the level is like.” Etiwanda coach Stan Delus gives instructions to his players on the court from the sideline during a win over Bonita Vista on Saturday.

After blooming during a 14-0 start last spring, a drought came in May.

Etiwanda dropped four out of its next five games, including round-robin Southern Section Open Division playoff contests against Santa Ana Mater Dei and Studio City Harvard-Westlake. Junior Daisia ​​Mitchell broke her ankle, leaving the Eagles without their primary ballhandler. A baby-faced roster with seven underclassmen was forced to grow up quick.

“People weren’t performing and helping us win games,” Delus said. “There was an internal frustration.”

Without Mitchell, the Eagles’ offense was stop-and-go, jolted off track by errant passes to the wings and the post. They rallied enough for a run into the regional championship game, but fell to Lynwood.

Their young core — Smith, freshman Destiny Agubata, sophomore Jaiya Mix — went into the offseason with just a morsel of what a championship team could feel like. They wanted the full meal.

This season, everything’s changed in a puff of smoke.

Aliyahna “Puff” Morris came to Etiwanda with the goal of a state championship. Yet she certainly wasn’t expecting an undefeated record her first season in an Eagles uniform.

“I never thought first in the nation, or first in California,” Morris said. “I’m just happy to help.” The freshman point guard, a shifty ballhandler who combines a sweet smile with a killer crossover, has helped Etiwanda in powering up a level. She orchestrates the Eagles’ high-low and pick-and-roll actions, making intelligent reads while creating a smooth midrange pull-up at the snap of a finger.

“She’s really a five-star-type player,” Delus said. “She transformed us completely into a high-level, open team.”

Morris’ addition has continued unlocking concepts that Delus began implementing the previous season, such as having Agubata act as an occasional point forward and shifting the sharpshooting Smith beyond the three-point line. The trio has been impossible to contain all season — Morris is putting up 12.7 points a game and dishing 5.7 assists, Agubata is averaging 15.4 points and 8.6 rebounds, and Smith is the leading scorer at 18.7 points a game.

The words of “Invictus” flow through these Eagles’ veins. They’ve weathered the storm of another injury to Mitchell, who Delus anticipates will return a couple games into the playoffs. They know there’s a bull’s-eye on their back, and they’ll fire arrows right back. In late January, they came back from down 20 points to beat a tough opponent at San Diego Cathedral.

“We’ve been through some games where things haven’t gone right, but we fight,” Delus said. “Like, this team fights.”

A few possible fates lie ahead. One, as Smith and Morris hope, sees the Eagles holding a CIF Open Division state championship trophy.

That would be notable for a couple of reasons. Of the 13 schools that have appeared in the CIF Open Division girls’ basketball finals in the past eight years, just three are public programs. Just one — Corona Centennial last season — is from the Inland Empire. Etiwanda wing Destiny Agubata tries to power her way to the basket against a Bonita Vista defender on Saturday.

Fifteen years ago, starting his coaching career at Corona, Martin Woods was “bitter” that he’d see private schools have more funding and better facilities than his program. Particularly, the talent in the Inland Empire — an area mostly featuring public schools — would get lost when playing private or charter schools, Corona Santiago coach Mike Mitchell said.

But as coaches have built up their programs, the playing field is becoming level.

“The IE is coming,” Mitchell said. “We’re just telling the OC and the private schools, ‘Hey, I know we have a target on our back, but we’re coming. We’ll take all arrows.’”

Even as 23-5 Centennial heads into the playoffs as a formidable opponent, there’s a mutual respect.

“To see Etiwanda and a number of programs in the IE really thriving, it’s just awesome,” Woods said. “It’s just a stereotype that private schools give you more of an opportunity to be more successful later on in life. I don’t agree with it.”

“Invictus” is about controlling one’s destiny. As a public program that’s built around the talent it has, a deep run this season would taste all the sweeter to Delus.

“To see and have a public school up top right now is pretty special,” he said. 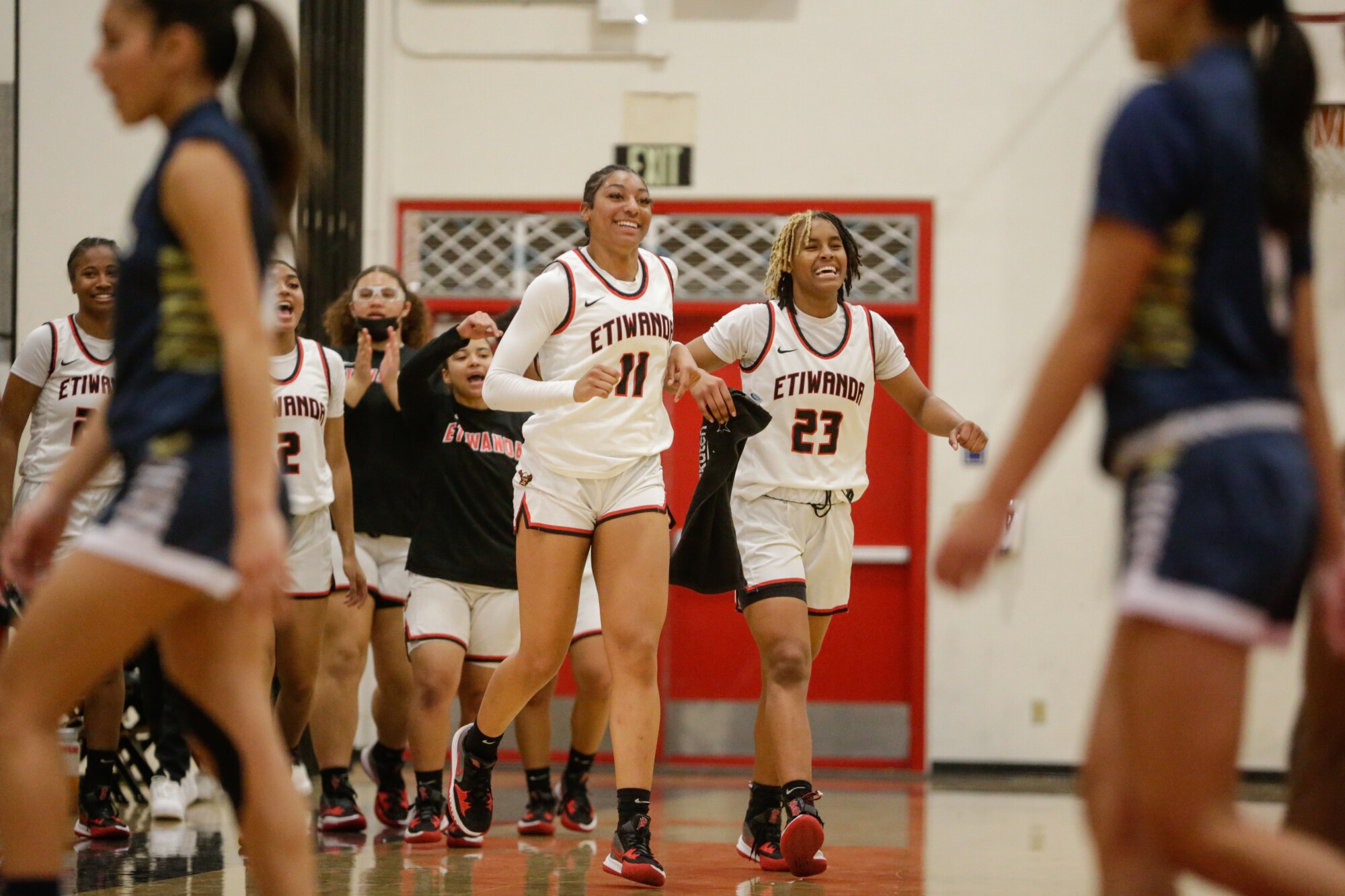 Etiwanda’s Kennedy Smith (11) and Sa’lah Hemingway (23) celebrate with teammates after a 69-33 victory over Bonita Vista on Saturday.