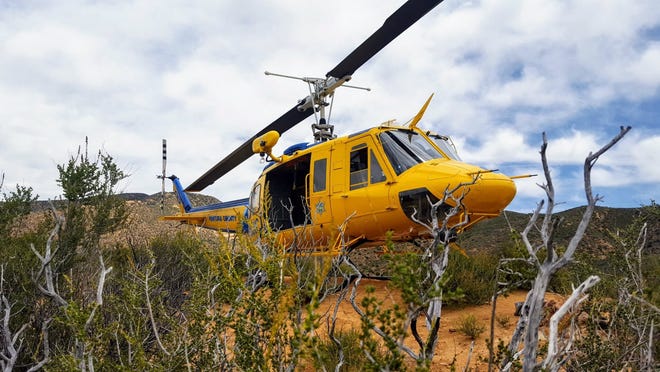 Firefighters quickly put out a brush fire Thursday afternoon in a southeastern part of unincorporated Ventura County along the 13000 block of Yerba Buena Road.

The fire was first reported shortly before 3 pm, and Ventura County Fire sent a large response, including more than a dozen ground crews and helicopters, to the area near Sandstone Peak along the Triunfo Pass. Callers reported seeing large plumes of smoke from across the region.

No injuries were reported and no structures threatened in the 1/2-acre blaze dubbed the Sandstone Incident, according Ventura County Fire officials. The cause of the fire was under investigation as of 4:30 pm

While fire crews on scene initially said the blaze had the potential to reach 50 acres, it ultimately measured at 0.47 acres. Fire officials said on Twitter the “fast attack” helped slow the blaze, which was stopped within about an hour.

Also responding to the fire were crews from Los Angeles County Fire and the National Park Service, which oversees much of the area because it’s part of the Santa Monica Mountains National Recreation Area.

Reports of the blaze came as dry, gusty Santa Ana winds blew through the region. As of Thursday afternoon, 3,150 customers in Ventura County and another 4,256 customers in Riverside County had their power cut off, according to Southern California Edison.