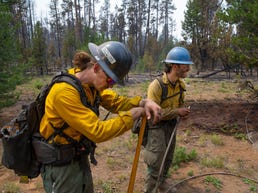 COVID-19 infections continue to climb, hitting Ventura County residents who have eluded the disease for more than two years.

Unlike previous waves, however, few of the infected are becoming sick enough to be admitted for care. Only 16 people with the disease were hospitalized in the county on Friday.

State data posted Friday showed a rate of 14 infections a day per 100,000 people in the county — the highest in more than two months. Nearly 7% of the people swabbed for the virus in PCR tests came up positive, a level not surpassed since mid-February.

Levin said the infection rate is likely higher than the data indicates because home tests are not included in the state data. Forecasters project the county’s daily infections could triple in the next month.

Outbreaks have also been reported in long-term care facilities, schools and businesses, public health officials said. Many of the business incidents involve three or four cases with one outbreak reaching seven people.

Doctors confirmed the COVID wave with some reporting a small uptick and others saying the rise has been dramatic.

What we know:Could 6 of 10 Ventura County residents have caught COVID-19?

“I’ve had four (cases) this morning. I’ve only been in the office for an hour,” Dr. Jim Hornstein, a Ventura family practice physician, said Friday. “It certainly feels like a surge right now.”

Hornstein said he prescribes the antiviral medication Paxlovid to patients at higher risk of severe illness. The medication needs to be taken within five days of initial symptoms. He said the pills appear to help but it’s difficult to tell because hospitalizations are rare for lower-risk people not on the medication.

Many of his infected patients have been vaccinated and some have been boosted. Hornstein said the shots don’t eliminate infections but reduce the risks of severe illness.

The disease can spread quickly and easily. But sometimes one spouse will contract the disease and the other will not, Hornstein said.

Cases are rising but not as high as in Los Angeles County, said Jeff Cox who manages the Carbon Health urgent care centers in Thousand Oaks and Newbury Park. Carbon Health also operates clinics in the San Fernando Valley that are getting hit harder by the virus, she said.

Levin said people who are infected run the risk of long-term COVID and symptoms that can last for months. He urged people to get vaccinated and boosted. He recommended all people wear masks indoors in public places.

“It’s incumbent on people who are older or have risks to wear masks no matter what other people are doing,” he said.

Across the nation, flags are being flown at half-mast to honor the 1 million Americans who have died from COVID. In Ventura County, 1,498 deaths have been linked to the disease.

Tom Kisken covers health care and other news for the Ventura County Star. Reach him at [email protected] or 805-437-0255.

At $69M, Santa Monica’s Most Expensive Home Could Be a Bargain