Comic-Con returns to San Diego amid the COVID-19 pandemic 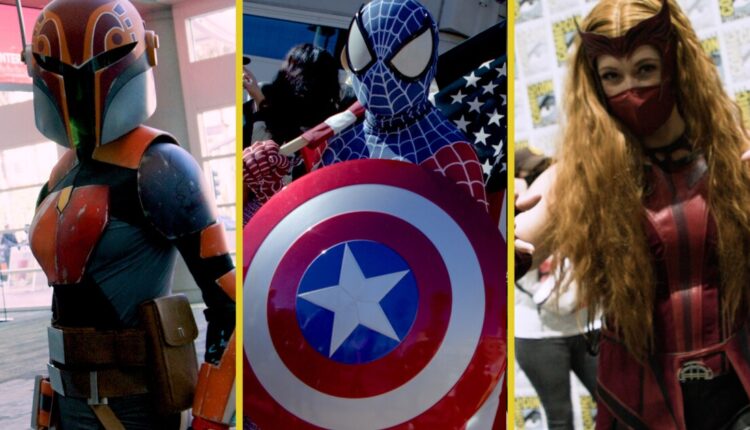 They say that not all superheroes wear capes. But they are all wearing masks now.

That weekend, thousands of people flocked to San Diego for the city’s first personal Comic-Con – the popular geek festival for everything to do with science fiction, superheroes, and fantasy – in two and a half years.

The cosplayers wedged themselves into their spandex, strap on their plastic weapons, and fastened their brightly colored wigs.

But with great power comes great responsibility. In a pandemic twist, they all wore face masks and red armbands after proving they had either been vaccinated against the biggest bad guy of all or recently tested negative: COVID-19.

“I wouldn’t say it’s normal. But if you want to come, you have to, ”said William McElligott, a steampunk Santa Claus whose white beard was covered by a green plaid cloth mask.

He called himself Jolly Saint Ridiculous – perhaps the perfect hero for the Comic-Con comeback on Thanksgiving weekend.

Carola and William McElligott as Steampunk Mrs. Claus and Santa at the Comic-Con Special Edition.

The scaled-down, three-day special edition Comic-Con at the waterfront San Diego Convention Center didn’t bring the usual summer crowd – an estimated over 160,000 in recent years – but the superfans enjoyed the return of the first face-to-face meeting since 2019.

“There seems to be a general excitement among attendees, volunteers, exhibitors and everyone involved. … I think everyone is relieved to get back to normal, even if it is a slightly smaller version of the typical Comic-Con event, “said David Glanzer, a spokesman for Comic-Con.

In 2020, the annual pop culture giant was held virtually as Comic-Con @ Home as the pandemic forced the first cancellation of the live meet since it started in 1970.

The personal event was so deeply mourned that the fans set up an altar near the convention center with flowers, memorabilia and handwritten messages: “I love you. I miss you. … just wear a mask ”and“ #NerdsUnite ”.

The virtual event returned this summer as the number of coronavirus cases increased with the advent of the highly transmissible Delta variant.

The meeting this weekend, which organizers expected between 40,000 and 50,000 attendees, was held as major events in California make a comeback.

After a year of creepy cardboard cutouts, human fans returned to the stands at the Los Angeles Dodgers and San Diego Padres games. The Los Angeles Marathon took to the streets last month. The rose parade is still a few weeks away. And if you hear euphoric screaming from Inglewood’s SoFi stadium this week, it’s probably because the driving South Korean boy band BTS is returning to the stage there.

The big events are returning now with roughly 64% of Californians fully vaccinated against COVID-19.

In the Comic-Con Special Edition, participants had to prove that they were fully vaccinated or had tested negative for the virus within the last three days. Everyone had to wear a face mask that couldn’t be covered by a superhero mask.

The pandemic could have changed the event. But at Thor’s Hammer, it didn’t change the self-proclaimed freaks, many of whom were still lovably shy and awkward when they appeared in public in their flashy attire after so long.

As hundreds of people queued outside the tent to verify the vaccine – a scene that would have seemed dystopian not so long ago – the sun was shining and temperatures were summery in the mid-1970s.

“It’s just nice to come back,” said Dequane Moss, 34, a self-proclaimed “big nerd” from San Diego as he stood in line with his family.

Moss and his wife Brittany, 33, waited with their 6-month-old son Memphis, a pandemic baby attending his first Comic-Con, and 4-year-old son Raiden, who disguised himself as his namesake, Mortal Kombat. Raiden, the god of thunder. Her 5-year-old daughter Arya was dressed up as Mileena, the mask-wearing ninja Mortal Kombat ninja. Around her mouth she wore sharp teeth that Brittany had made from cut and varnished acrylic fingernails. 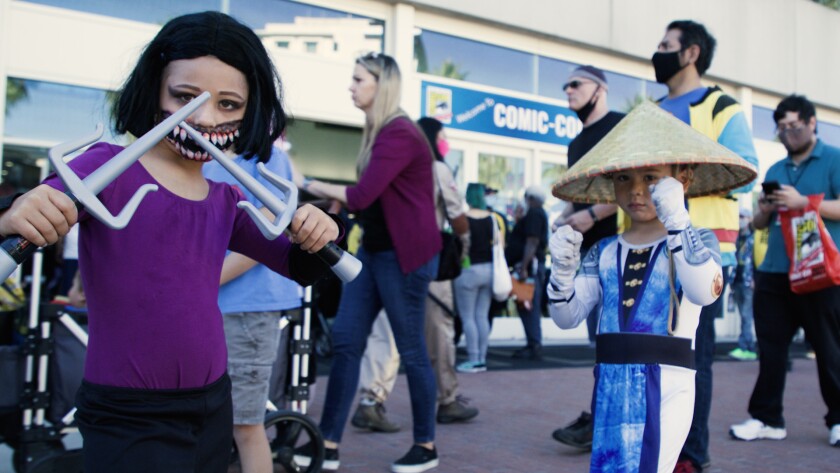 Before the pandemic, Arya and Raiden had dressed up all their lives and come to Comic-Con. Mom and Dad have been coming since 2006.

They didn’t participate in the virtual comic cons, which just didn’t feel the same.

“We told the kids the germ was pausing it,” Brittany said. This week, she and her husband waited until the last second to tell the children about the event. They thought it would be canceled again.

Ferna Puga, 23, of Tijuana, drove with her 22-year-old triplet sisters from the US-Mexico border to downtown San Diego early Friday. They were dressed up as Ghostbusters, wore beige overalls with prop-proton packs, and couldn’t wait to be back at Comic-Con for the fifth time. 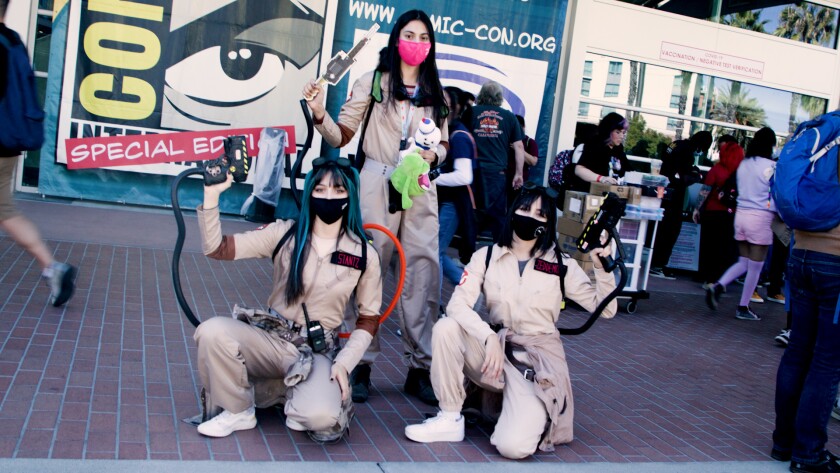 The Puga sisters traveled from Tijuana, Mexico to participate as Ghostbusters in the Comic-Con Special Edition.

Puga clutched a stuffed Stay Puft Marshmallow Man and a Slimer and shrugged when asked about her light pink face mask.

Dude Vader is gold-colored from head to toe, with gears, tubes and armrests of lacquered carpet upholstery. He usually wears a heavy, elaborate helmet that was made with a 3D printer and covers the entire head.

But this year Canole redesigned the costume so he can have a visible, uncovered face mask. He wore a gold-painted straw hat covered with gold burlap, goggles, and a cloth mask with a photo of a barbecue printed on it. 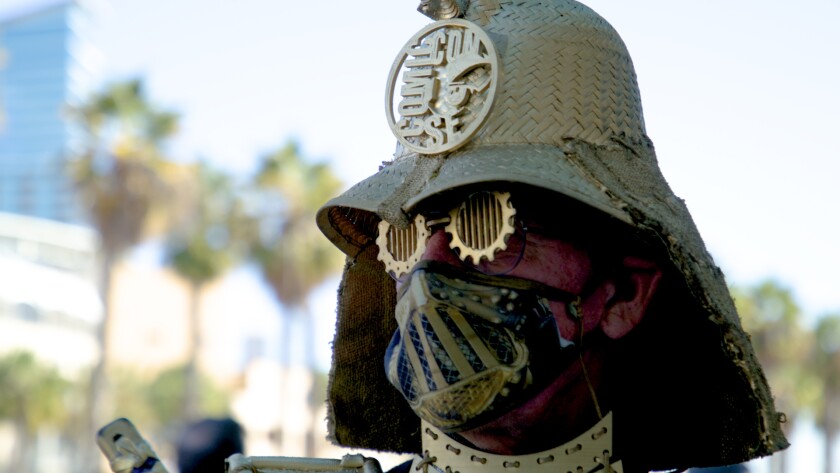 Dude Vader, who has “had enough of the dark side,” is more eye-pleasing for kids, explained Canole, who hosts numerous costumed charities, including in hospitals.

“After two years of greenscreen charities, I’ve got my energy back on my feet,” Canole said. “Everyone is a child at Comic-Con.”

Randall Langit, 33, of San Diego was Captain Spider America, a Spider-Man who wore a Captain America shield and a stars and stripes. 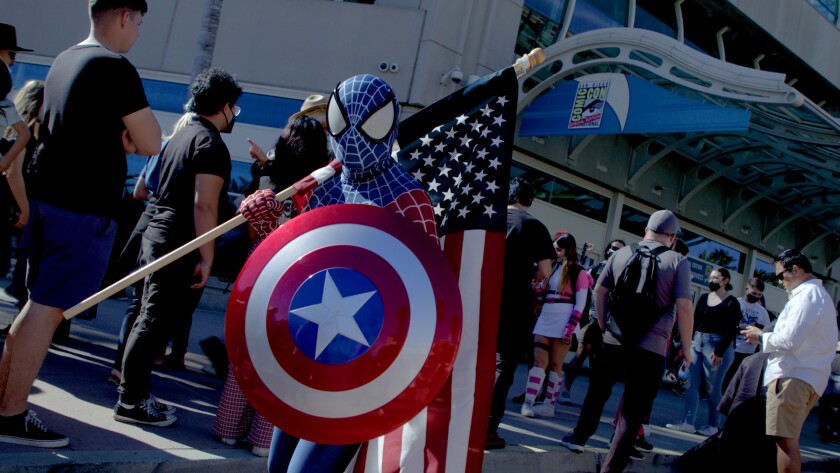 A marine veteran working at FedEx, he’s been coming to Comic-Con for about 20 years, a place where “you have the opportunity to be a nerd.” It was “heartbreaking,” he said when the convention – and the Padres games – went away last year.

“You won’t be able to see my feelings behind this mask,” he said.

Suffice it to say he was thrilled to be back.

Disguised as superhero Hawkman, Andy Holt, a 54-year-old database administrator from Irvine, said Comic-Con was the perfect place to spend the day after Thanksgiving – and a lot more fun than a family dinner.

He wore a huge pair of mechanical, remote-controlled wings, which he said were “made of the skin of my defeated enemies. And also craft foam. From the best hobby lobbies and Michaels. “

After a year and a half that felt like “house arrest” for him during the pandemic, Holt drew attention and happily posed for photos with passers-by.

“These are my people,” he said. “You get my geeky references. What if I talk to people here? You understand what I’m saying.”

Top 7 Free Activities During Your Stay in Los Angeles

Memorial tattoos are even more widespread in times of COVID-19