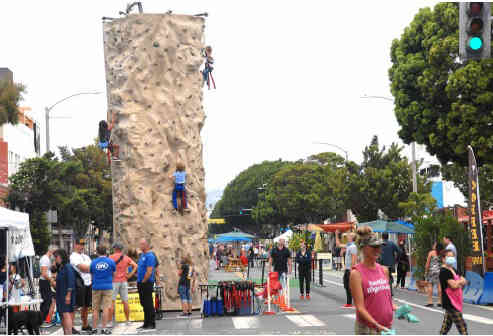 Neighboring residents had feared that closing the two-block stretch from Hill to Kinney streets on select weekends would drive traffic into the narrow neighborhood streets and take up much-needed parking.

But in his report to the Mayor and City Council last Tuesday, Transportation Director Edward F. King wrote that traffic levels “increased slightly” on adjacent streets.

Meanwhile, parking levels on neighboring streets — which are “highly utilized” during none event days — “increased moderately,” reaching full capacity on some streets.

According to automobile counts taken on the pilot’s first weekend on July 24 and 25, traffic volumes on Neilson Way increased by an average of 5,800 daily trips over non-event days for an overall average of 24,350 daily trips.

When it came to automobile speeds, “no significant change in speed was evident in the data when comparing the non-event baseline vs. the first event weekend,” according to the report.

The changes in traffic volume during the sharing of an Open Main Street pilot came as “pedestrian levels increased significantly,” King wrote.

The “slow pace” on roads “commonly filled with high volumes of loud and fast-moving traffic allowed people to visit local establishments they might not otherwise frequent and discover businesses they may not have known existed while driving,” King said.

During four select Saturdays and Sundays from July through October, the stretch of Main Street was turned into a pedestrian plaza with outdoor dining, shopping, and recreation.

To enliven the street, businesses were allowed to expand further from their storefronts, family activities were held, and artists, dancers and musicians took part in organized performances, City officials said.

King noted that “all noise readings were within authorized levels for the location.”

According to the report, “Staff observations during each event did not indicate significant neighborhood traffic, noise, transit, or parking disruption.

“Staff received less than a dozen inquiries after each weekend event from residents and businesses regarding lack of on-street parking, general inconvenience to residents due to the closure, excessive noise levels, and reports of trash.

“Staff also half received a dozen emails from residents who expressed enthusiasm for the events and a desire to formalize the pilot,” King wrote.

The program — which cost $141,070, not including staff time — had a generally positive economic impact on the street, according to the report.

Fifty-four percent of businesses reported an increase in sales, and 19 percent reported a decrease, with restaurants faring better than retail.