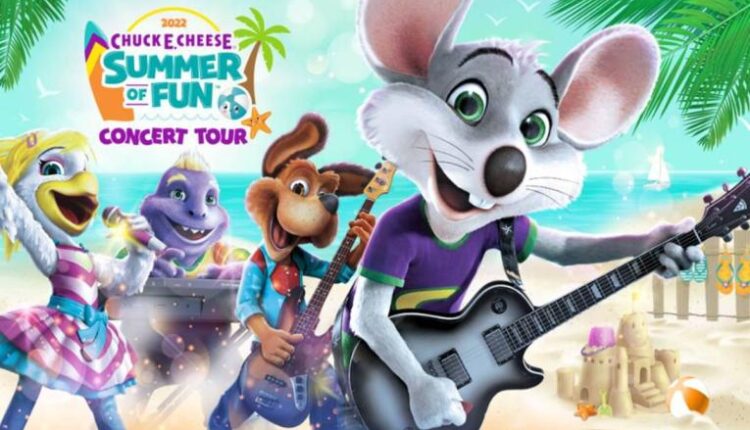 Chuck E. Cheese, the number one family entertainment venue, announced today that their second annual national live tour with Mr. Munch’s Make Believe Band will kick off June 4 in Chicago at Navy Pier. The iconic group will return to the stage this summer to jam with families across the country, with shows in Chicago, Miami, Santa Monica and Dallas-Ft. worth One lucky fan will also win an exclusive at-home performance with the Summer Concert Tour Block Party Sweepstakes presented by Pure Life.

The outdoor concert series beginning June 4 will feature fan favorites, including top tracks from the hit Chuck E. Cheese album, Summer of Fun. Those celebrating a birthday will also be treated to a special birthday sing-along during the show, and all fans can stick around for an exclusive meet & greet with Chuck E. Cheese. This musical event of the season is just the beginning of an immersive Summer of Fun experience, returning to Chuck E. Cheese locations nationwide on June 6.

“Chuck E. Cheese is gearing up for its best summer yet, and we’re excited to bring our popular entertainment outside and on the road with our second multi-city concert tour,” says Melissa McLeanas, Vice President of Global Licensing, Media and Branded Entertainment. “Chuck E. can’t wait to rock with fans across the country to his signature songs. We’re even bringing the band home to one lucky winner this year for a first-of-its-kind private concert experience.”

On July 23, at Jones Beach Theater in Wantagh, NY, KIDZ BOP fans can also enjoy a meet & greet and special appearance by Chuck E. Cheese at the venue before the KIDZ BOP LIVE 2022 show.

A New “Live” Album and Chance to Win

Get ready to sing along with the all-new Chuck E. Cheese live album, Summer of Fun Concert Live, which will be released on June 3 ahead of the band’s Chicago debut. The new album features top tracks, like “Song of Summer” and “Beach Party Bash,” and will be available to stream on all music platforms and for download on iTunes.

Plus, for the first time ever, fans can enter for a chance to win their very own private concert from Chuck E. and the band with the Summer Concert Tour Block Party Sweepstakes presented by Pure Life. One lucky winner will be awarded a Chuck E. Cheese summer party at their home, with food, backyard games, prizes and best of all – a special appearance from Chuck E. and the Band! No purchase necessary. Beginning June 3, fans can visit chuckecheese.com/concertsweeps for full details and to enter.

As the Birthday Capital of the Universe, Chuck E. Cheese loves to make birthdays a big deal. In addition to a birthday serenade at each concert, the company recently launched three new Birthday Party offerings in-store that level-up the fun and make party planning a breeze. Visit chuckecheese.com/packages for more information.

Summer of Fun, the latest experience in the brand’s 4 Seasons of Fun programming, will launch in-store at all US Chuck E. Cheese locations on June 6. Stay tuned for full details, including exclusive new menu items, daily discounts and more!

For more information about the multi-city concert tour visit: Summer of Fun Concert Series. All shows are free of charge and open to the public and will operate according to state and local COVID-19 guidelines.

News and information presented in this release has not been corroborated by QSR, Food News Media, or Journalistic, Inc.