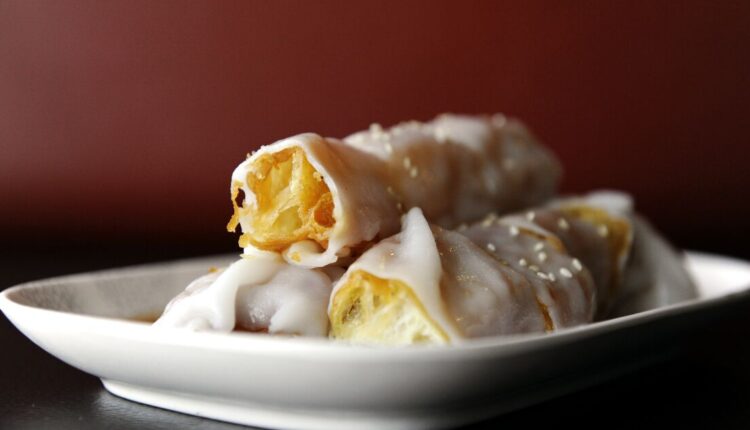 Donuts, dumplings, gourmet fish sticks, where to find the perfect croissant plus a sacrilegious bagel and pre-hippie granola bars. I’m Laurie Ochoa, general manager of food coverage at the LA Times, with this week’s Tasting Notes.

(Dingding Hu / For The Times)

Chances are good that on a weekend morning you’ll find me waiting for a table outside the San Gabriel branch of Delicious Food Corner. Both of my now-grown children still love to eat there years after we first started going to the original Monterey Park location for Chinese breakfast. Like their late father, they are congee aficionados, often alternating between the fish fillet rice porridge or the one with pork and preserved egg. Along with a required order of pineapple buns that come halved and slathered with a ridiculous amount of butter, we often eat the congee with steamed rice-flour rolls wrapped around Chinese donuts and drizzled with a thick, sweet soy sauce and sesame sauce. The silkiness of the steamed noodle draped around the fried cruller is one of the great texture contrasts of an excellent Chinese breakfast. Another is the Chinese donut itself, either dipped in congee or snipped into pieces and scattered on top of a bowl of congee.

This week, we published culture writer Jean Trinh’s gorgeously written story about Chinese donuts and how the yu char kway, as they are known in the Chinese dialect Teochew, are an example of how families often, as Trinh writes, find “ways to weave stories about their lives into the foods they cook.”

“For my family,” Trinh writes about yu char kway, “they’re not just donuts but rather a symbol of resilience in the face of war and genocide.”

After the Khmer Rouge takeover of Cambodia that led to Trinh’s family being forced from their Phnom Penh home, her parents escaped to Vietnam and went into the Chinese donut business. “The Chinese donut would essentially save their lives,” she writes. Years later, in her parents’ San Gabriel home, Trinh’s parents still make their own yu char kway for family gatherings surrounded by young grandchildren learning to love the donuts that mean so much to their personal history.

“The humble Chinese donut,” she writes, “was a storytelling vehicle for so much of my family’s history and their transnational migration to America.”

We are lucky here in Southern California that the Chinese cruller has become a part of our culinary landscape. Who better than Trinh to guide us to some of the best examples of the savory donuts? I was thrilled that her assessment of the 10 best Chinese donuts in the Los Angeles area included Delicious Food Corner, as well as Siam Sunset, the fantastic Thai Town cafe that recently returned to our family rotation of regular breakfast spots — and where, true to Trinh’s warning, you must arrive early or risk missing out on the crullers. Huge Tree Pastry in Monterey Park and downtown LA’s Little Sister are places that I used to go to frequently and now will revisit thanks to Trinh’s list. She also praises the new downtown location of Pine & Crane, which as Times critic Bill Addison recently wrote, is the only one of Vivian Ku’s restaurants to serve Taiwanese breakfast dishes — including, of course, you tiao, as the crullers are called in Mandarin . According to Addison’s tip, I’ve been eating there a lot.

And for all the times I’ve shopped at the San Gabriel 99 Ranch Market, it took Trinh’s guide for me to realize that Chinese donuts, as well as roast duck, pork buns and Taiwanese bento boxes, are sold in a corner of the grocery store called Asian Gourmet Kitchen. I’m grateful to Trinh for this tip, as well as for the reminder that in Los Angeles the foods that make our family memories don’t always come from the heritage of our parents and grandparents, but from the restaurants of the many ethnicities that make our great metropolis.

Eat your way across LA

Get our weekly Tasting Notes newsletter for reviews, news and more.

The world of dumplings in LA 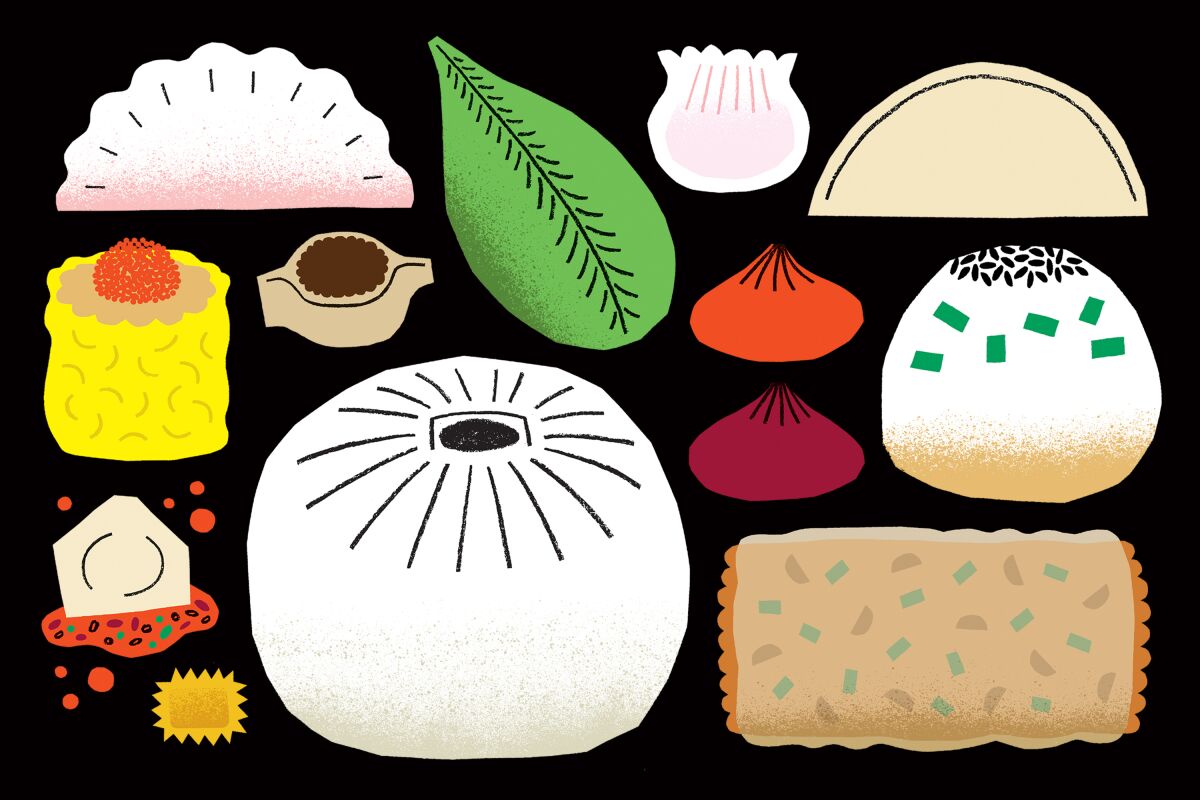 Is a calzone a dumpling? What about an empanada? We asked the Dumpling Mafia for Season 2 of “The Bucket List,” which explores dumplings from all over the world right here in Los Angeles.

(Erin Jang / For The Times)

Have you been watching Season 2 of Jenn Harris’ “The Bucket List,” all about dumplings? So far, three of 11 episodes have been released, including the opening episode on soup dumplings; a deep dive on how to make the perfect gyoza, which includes advice from our new deputy food editor Betty Hallock (a familiar name to longtime readers); and an exploration of Italian-filled pasta, with visits to Steve and Dina Samson’s wonderful downtown LA restaurant Rossoblu and Paola Da Re’s Pasta Sisters in Culver City. Coming in the next episode being released Monday, Harris goes on a dumpling crawl in Koreatown in search of the best mandu. It’s all Harris’ way of showing the world of dumplings that exists in Los Angeles.

And now that she’s got a few episodes out in the world, Harris has put together a guide to where to find the best dumplings in greater Los Angeles. It’s a perfect companion if you’re looking for a great place to eat this weekend. Artist and archivist Suzanne Joskow at her home in Los Feliz.

Heather Platt talked with artist Suzanne Joskow about her collection of vintage community cookbooks — the Community Cookbook Archive: LA — and her efforts to preserve this history captured between the covers by cooking and photographing “many recipes that might otherwise fall into the dusty corners of local History.” One example is “The Castelar Creche Cook Book,” which Platt calls “an incredible artifact of LA culinary history.” Consider that the cookbook, published in 1922 “as a fundraiser for LA’s home for homeless babies,’” contains a recipe for “California chews,” which “resemble granola bars and are a delightfully chewy combination of dates and nuts.”

“You can time travel,” Joskow tells Platt. “This recipe might have been eaten here, 100 years ago.” 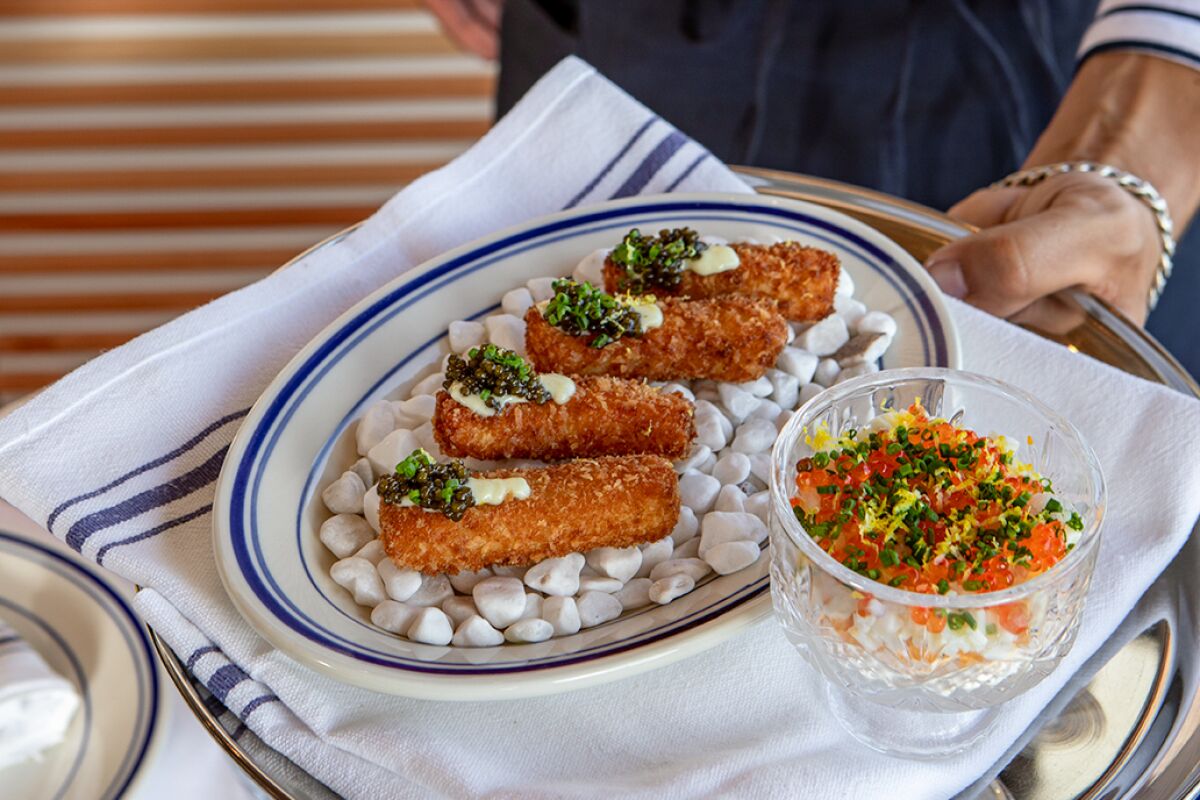 Among the fish and seafood dishes served at Dear Jane’s in Marina del Rey are seafood towers, crab cakes and, above, caviar-topped fish sticks.

Stephanie Breijo has gathered all of the week’s restaurant news, including word about Dear Jane’s, the new sibling restaurant of Dear John’s from Hans and Patti Röckenwagner and Mélisse’s Josiah Citrin. Instead of big meat, Dear Jane’s serves big seafood towers, plus decadent caviar-topped fish sticks.

How far will you travel for a perfect croissant without getting on a plane for France? Jenn Harris drove to Ojai, where word is spreading about Kelsey Brito’s obsessively perfect croissants at the Dutchess. Harris reports that lines wrapped around the bakery counter even at 7 am where buyers were anxious to get Brito’s croissants before they ran out. Of course, there are more than croissants at the Dutchess and, in the interest of science, Harris bought one of almost everything in the bakery case. As she describes it in her column of the best of everything she ate last week, Brito’s self-proclaimed “sacrilegious bagel” is an excellent consolation prize if the croissants sell out. “The bagel had a delicate, crisp exterior with a soft but just-chewy-enough middle and a slight sourdough tang,” Harris writes.