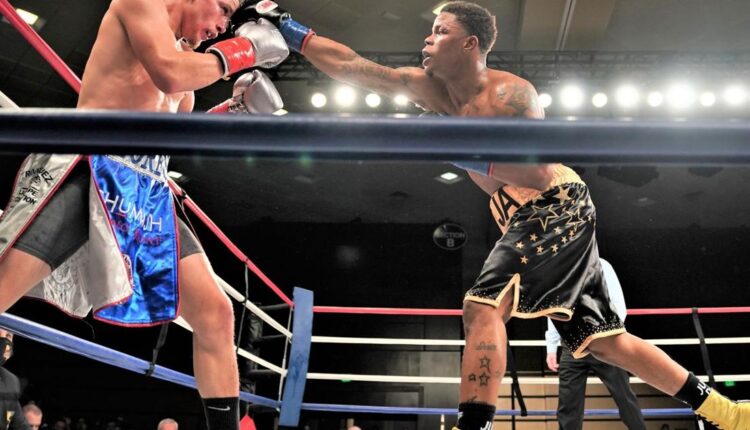 Buellton’s Angel Flores put his unbeaten record on the line as boxing returned Friday night with WFC 131 to the Samala Showroom at Santa Ynez’s Chumash Casino.

The fight was action packed. It didn’t disappoint the partisan crowd, though the result did as Flores (now 8-1) lost his first professional fight in a split decision to St. Louis’ Derrick Murray (15-4-1).

“A full house, great fights – some of the best fights that a lot of these people have seen,” said Matt McGovern, President of the WFC (World Fighting Championships). “The place was sold out, about 1,100 people.”

“This was our first live event in almost two years,” said Mike Traphagen, senior public relations manager for the Santa Ynez Band of Chumash Indians. “There was no better way to be live events again than boxing. The energy, the outstanding athletes, great fights – there is nothing quite like it.”

The fight between the 137-pound contenders went its scheduled six rounds, with Flores receiving the nod from a ringside judge (59-55) while the other two judges favored Murray, 58-56.

The action was non-stop from the start.

Both fighters forced the attack and landed solid punches throughout.

Murray bled Flore’s nose late in the first round for the only visible damage to both fighters.

“When I saw the blood, it became a target for me,” Murray said. “But he’s tough, so tough. That didn’t seem to bother him at all.”

Murray gained confidence as the fight progressed but Flores never shied away from the action.

Whenever it looked like Murray might have an advantage, Flores would hit back with a swing – both landing powerful punches every round.

In the fifth, Flores had a chance to end the fight – rocking Murray with a right uppercut, quickly followed with a concussive left-right to the head.

“When he hit me in the fifth round, my knees gave out. I didn’t know where I was,” Murray said. “He hit me with trucks, with howitzers – this man can hit. I don’t know how I survived that.”

“I didn’t know anything about Angel. I entered this fight with just a week’s notice,” Murray said. “But I saw early on that he’s a hard puncher and hard punchers swing slow. I was able to counter the punch, get under his punches and score some points.”

Flores was unavailable to the media after the fight.

In the co-main event, Oxnard’s Rudy Ochoa took on his 10-1 record against undefeated (8-0) fighter AJ Graham of Belleville, Illinois in a 132-pound bout.

Ochoa, scheduled for six rounds, suffered his first loss with a third-round knockout.

Midway through the first round, Graham landed more punches.

Graham’s confidence grew as he took control on the second lap.

At the start of the third round, as you sat ringside, you could clearly hear Graham saying, “You’re going down this round.”

And then he launched a fierce attack.

A barrage of left/right/left combinations got Ochoa in trouble – he hung on to the clinch to catch his breath.

Graham scored the knockout at 2:10 of the third round.

“My game plan was to use my jab,” Graham said. “In the second round I started hurting him. In the third round I brought him to him but I had to be careful not to hit myself. I knew it could take four, five or six laps. I didn’t want to get ahead of myself but I know I hurt him in the third round and I wanted to finish it.

“I wanted to test myself and put on a good show for the fans, so this was a good opportunity,” Ochoa said. “I love it here 100 percent. It was great to get back in the ring. I’ll be back – hopefully when the WFC is back in April.”

In early pro fights, San Fernando Valley heavyweight Josue Vargas improved to 2-0 with a first-round KO of Kingman, Arizona’s Neil Cannon, who was making his pro debut – sending him to the canvas twice and finishing with Mark 2:02.

In both fighters’ pro debuts, Ventura heavyweight Anthony De La Cruz had an even quicker win, knocking out Dayton, Nevada’s Matt McCrary twice and winning by KO in 1:23 of the first round.

“This was an extraordinarily even group of fighters all night,” said Jack Reiss, the night’s other umpire. “Especially those last two fights – they were of a high standard, maybe the best fights these fans have ever seen and Derrick probably fought the best fight of his life.”

The WFC will be back at the casino for two nights in April – a boxing night on Friday April 8th followed by a night of mixed martial arts and kickboxing on Saturday April 9th.

Derrick Murray lands right on the head of Angel Flores during the WFC 131 Main Event at the Chumash Casino in Santa Ynez. Murray won after a split decision. 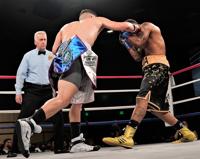 Buellton’s Angel Flores gets through with a right hand against Derrick Murray as WFC boxes at Chumash Casino on Friday night.

Derrick Murray scores left against Buellton’s Angel Flores in the WFC 131 Main Event at the Chumash Casino in Santa Ynez. Murray won after a split decision. 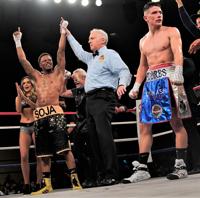 Referee Jack Reiss raises Derrick Murray’s hand to declare him the winner after the judges awarded Murray a split decision over Angel Flores during Friday night’s boxing action at the Chumash Casino.

Rudy Ochoa is defeated by AJ Graham in the third round in WFC Boxing’s co-main event at the Chumash Casino on Friday night.

Josue Vargas scores a first round knockout on Neil Cannon during Friday night’s boxing at the Chumash Casino.