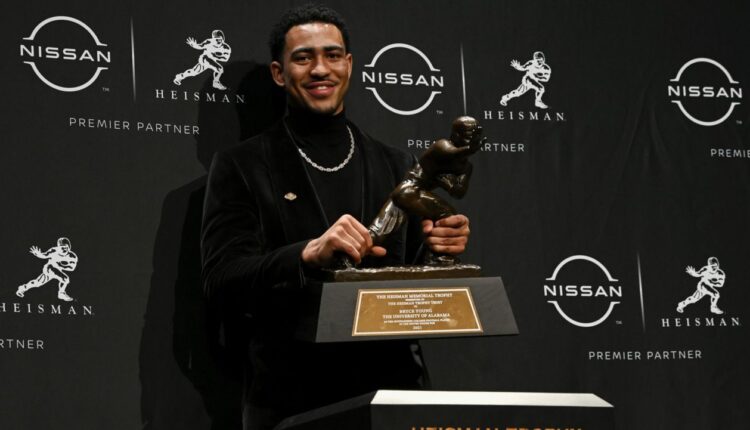 LOS ANGELES – Mention the name Bryce Young to any college football fan and there are a few things that come to mind: a special talent, incredible arm strength, a born leader, and now a Heisman Trophy winner.

But if you ask those who really know the Alabama quarterback, the first thing that springs to mind is his roots.

“At a very young age, I could tell Bryce was different,” said quarterback coach Danny Hernandez. “And it feels pretty good that everyone else is realizing that now.”

Hernandez has been helping develop some of Southern California’s best quarterbacks for over a decade. He will be the first to tell you that before Young dropped pennies in Tuscaloosa, he was just a Pasadena kid with a big dream.

“I think if you look at Bryce right away, he won’t pass the eye test, but if you just look at that, you’re missing out on so much of what he brings,” said Hernandez.

Young’s height, at six feet and a smaller frame than most prototypical quarterbacks, has never stopped him from surpassing at Mater Dei – where he was Gatorade Player of the Year and National Champion – or Alabama. It showed the players on the field what can be done with hard work and dedication.

“Bryce was the standard,” said Hernandez. “Look at everything he could do, and since he’s the outsider, it’s someone you’ve worked with before. It’s someone you watched his journey with.”

And that was certainly the case for eighth grade quarterback Isaiah Ariaza, who grew up playing Young with his older brother.

“I remember him as an eighth grader working with Danny,” Isaiah said. “It’s definitely an eye opener.”

If Young could do it, so could Isaiah.

“It’s the greatest inspiration,” he said. “That’s our claim. Just that he sets this standard for us QBs out here is unbelievable.”

And that’s what’s special about watching Young’s journey for his former coach.

“Now the kids look at what he’s done and say, ‘Hey, you know what? I think it’s possible. I can do it,'” said Hernandez. “It feels good that you are a part of it.”

Leon-Vazquez heads the newly reorganized board