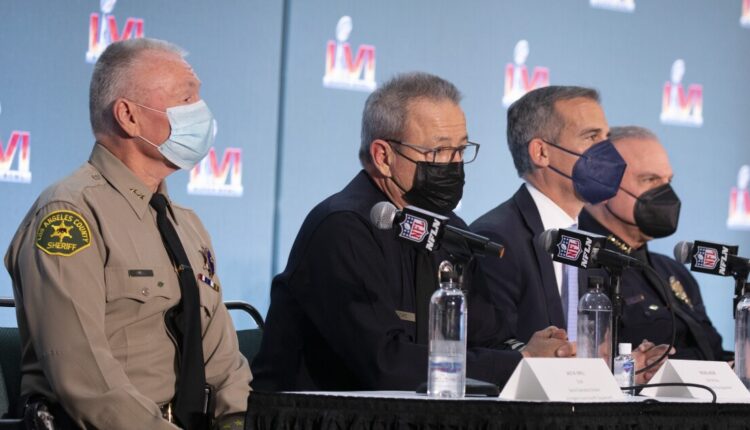 Authorities said Tuesday they identified no credible threats to the Super Bowl.

At a news conference, federal and local authorities said they have been monitoring for various threats to the NFL championship game between the Los Angeles Rams and the Cincinnati Bengals, such as terrorist strikes and cyberattacks, and have plans in place to deal with any attempts to disrupt the event. They added that they are also watching out for criminal activity often associated with such massive events, including the sale of counterfeit goods.

Asked about the beating of a San Francisco 49ers fan outside SoFi Stadium during the NFC championship game last month, Inglewood Police Chief Mark Fronterotta said his department plans to deploy extra officers on Sunday to areas outside the stadium, including the parking lots, which “will be extensively covered.”

“What you will see is hundreds of officers deployed on game day and this week,” Fronterotta said. Inglewood police will be supported by the Los Angeles County Sheriff’s Department, which has dedicated 400 deputies, K-9 units and other employees to the Super Bowl who specialize in crowd management, hazardous materials and tactical situations, said Jack Ewell, chief of the Sheriff Department’s Special Operations Division. Extra deputies will be assigned to the transit system, he added.

Alejandro Mayorkas, secretary of the Department of Homeland Security, said his agency has deployed more than 500 employees to the Super Bowl — physical security specialists, cybercrime experts and investigators of human trafficking and counterfeit goods, among others — who would be “taking measures that are seen and unseen.”

Police and others frequently allege the Super Bowl and other large sporting events attract women trafficked for sex, although that link has increasingly been called into question.

Federal officials warned that they would be enforcing a temporary restriction on drone flights over and around SoFi Stadium on Sunday. The restricted zone spans a 30-mile radius around the stadium and will go into effect one hour before the game and remain in effect until an hour after it ends. Violations could result in fines, revoked licenses or criminal prosecution, officials said.

Los Angeles Police Chief Michel Moore said there have been no fights or unruly behavior at pre-Super Bowl events hosted at the Los Angeles Convention Center. Although the hundreds of officers deployed to police the events have been a “substantial draw” on LAPD resources, he said officers’ scheduled time off has been canceled to ensure patrols and other operations are fully staffed through the weekend.

Enough police will also be available to patrol “the eventual parade,” Moore quipped.

Moore asked the public to report any suspicious or unusual behavior, including cases of public intoxication. “We need to know about that,” he said. “That kind of behavior doesn’t improve over time.”