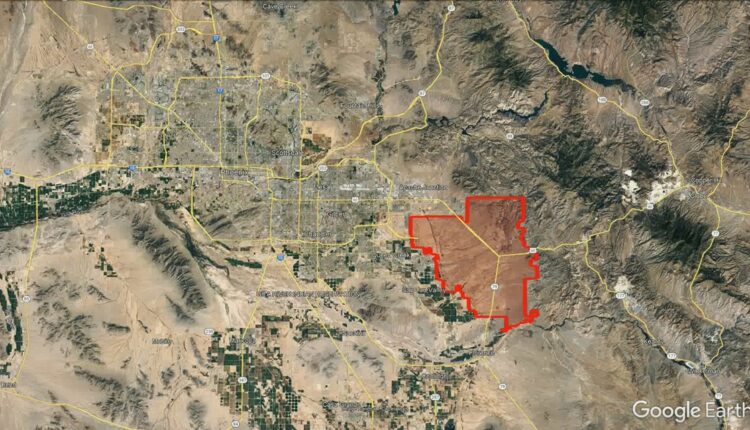 A planned development in the far East Valley would add nearly a million people. But where’s the water coming from?

APACHE JUNCTION, Ariz. — There’s a city twice the size of Tucson out in the desert south of Apache Junction. It houses 900,000 people in thousands upon thousands of homes.

But it just hasn’t been built yet.

The area is 276 square miles of empty desert called Superstition Vistas. It stretches from the southern border of Apache Junction, down the edge of San Tan Valley, all the way down to Florence, then across to the US 60 and beyond.

It follows the edge of the Tonto National Forest and wraps around Gold Canyon, and then back to Apache Junction.

And for all that area, with all those people estimated to live there upon completion, there’s not enough water.

“It is huge,” Grady Gammage Jr., a lawyer and water expert with the Kyl Center for Water Policy said. “One of the things we said is this could be the San Fernando Valley of Phoenix.”

Gammage Jr. wrote one of the first reports for Superstition Vistas nearly 20 years ago. At the time he predicted the area could house 900,000 people by 2060. It would take some creative water choices, however.

“We can grow another million people or more, frankly,” he said. “But we have to start making tough choices.”

The problem is that the Superstition Vistas has no dedicated water source, Gammage wrote.

The entire tract of land is in Pinal County, a county so strapped for water that the state has refused to let any development take place that uses groundwater alone.

Arizona state officials said in 2019 that Pinal County didn’t have enough groundwater to sustain its forecasted development. So, Superstition Vistas would not be able to use groundwater.

One potential workaround involves a state law that allows developers to use groundwater as long as they replace it by pumping water into other ground somewhere else. Major sections of the West Valley were developed that way.

But Gammage said that’s not as popular an idea as it used to be since water is more scarce all over Arizona.

Superstition Vistas was also never farmland, so there’s no canal running through it to deliver Colorado River water. Because of that, there are no inherent water rights that go along with the property.

“There’s a lot of smart people thinking of ways,” he said. “Will it cost more money? Yes.”

But also, as of now, there’s only a four-square-mile area of ​​Superstition Vistas that’s under construction.

The first phase calls for 10,000 homes built by two developers. Those neighborhoods, Powell said, have been annexed into Apache Junction and the city will provide the water for them. But, that’s as far as Apache Junction’s water commitment goes.

“We prepared for many years before this land was even going to go to auction,” Powell said.

There are still 274 square miles of land left to be developed, and most of that hasn’t been sold yet. The state owns it and has been selling it at auction.

But unless someone comes up with a plan, none of that empty land has a guaranteed supply of water.

RELATED: A huge amount of Arizona water is being used on memes, selfies and viral videos. Here’s why