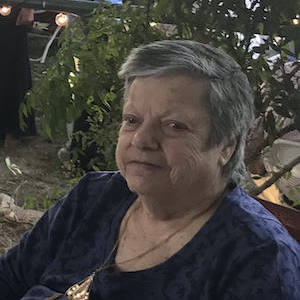 Anna was born to Lawrence J. Plunkett and Agnes V. Plunkett (La Fave) in Malden, Massachusetts, to one of four children. At the age of 12, her family moved to the San Fernando Valley, where she later met her first husband and had three children, and two more with her late husband Robert, who she was married to for 46 years before he died in 2019. Anna and Robert adopted their grandson and later raised him as their own.

Anna spent most of her adult life in California, with the exception of a few years in Washington state. At a young age, she enjoyed spending time with family and friends, doing handicrafts and dancing the night away. Anna was known as an animal lover and would do anything for her; she spared nothing to give them the best possible life. Anna spoiled not only her animals, but also her children and grandchildren with unconditional love, acceptance and invaluable advice. Anna had one of those personalities who got along with everyone; she had a gentle, loving demeanor. Your family and friends will miss her beautiful smiles, infectious laughter, and unwavering love.

Anna leaves behind her children Paul, David, Lorraine, Vykki, Robert, Eric and son-in-law Joe; Sisters Bernice and Marilyn; 14 grandchildren; 10 great-grandchildren and many other relatives and friends.

The memorial service took place on November 30, 2021 at the Desert Lawn Memorial Park in Palmdale.