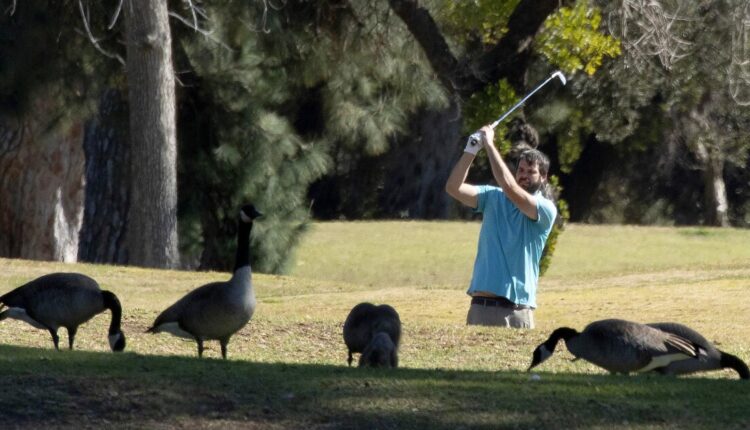 A warming trend has made southern California one of the hottest places in the country and even more unusual weather is expected this week, officials said.

By midweek, temperatures in many valley and coastal areas are expected to rise into the mid-80s “where most people aren’t used to that kind of winter heat,” the National Weather Service said. The highest heat will occur between Wednesday and Friday.

A one-day record was already broken when Anaheim soared to 85 degrees Sunday — the hottest temperature in the nation, officials said.

David Sweet, a meteorologist with the Oxnard Weather Service, said downtown Los Angeles will climb into the low 80s on Monday and hit the high 80s by Thursday and Friday.

Sweet said normal high temperatures for this time of year are around 68 degrees, “so 88 would be 20 degrees above normal.”

The forecast for the weekend is a bit more uncertain, but officials are currently predicting that Super Bowl Sunday in Inglewood will also top 80 degrees.

Officials warned the week’s temperatures could feel particularly unusual for visitors from out of town – of whom about 150,000 are expected in the days surrounding the big game.

“Be prepared for signs of dehydration and fatigue, which can lead to heat stress during the hottest part of the day or when spending extended periods outdoors and exercising,” the weather service said.

February’s unusual heat is being driven by a high-pressure ridge, or “dome of warm air, that will sit over southwest California,” Sweet said.

Also on tap are Santa Ana winds, which are expected to continue through Monday afternoon, with additional strong winds possible later in the week, he said.

The strongest winds will be in the Santa Monica Mountains and other mountain ranges in Los Angeles County, with gusts exceeding 60 miles per hour at times.

“Those offshore winds make it very warm and very dry,” Sweet said. “Then you add that high-pressure ridge, and that’s why the combination is pushing our temperatures to record levels.”

The hot, dry forecast is of particular concern after the state’s second snow survey this season, which found unusual conditions have already contributed to a few inches of snowmelt and a lack of snow accumulation this year. Snowpack traditionally provides the state with about a third of its water.

But above-average temperatures and below-average drought are expected to continue in California for the next week, if not longer, according to the latest forecasts from the National Weather Service Climate Prediction Center.

The forecast is in stark contrast to conditions on the east side of the country, where residents are recovering from a snowstorm and expect below-normal temperatures for at least the next six to 10 days.

And although December’s rains improved wildfire conditions by creating some wetter vegetation, there is still a possibility of wildfires due to this week’s warm, dry and windy conditions, officials warned.

Local residents are advised to be extra cautious around combustible materials and also to be on the lookout for wind hazards such as fallen branches and power lines.

However, there is some relief. Cooler temperatures are expected to return to the Los Angeles area next week, Sweet said.