After the evacuation, they ushered in the Jewish New Year in the middle of a wildfire 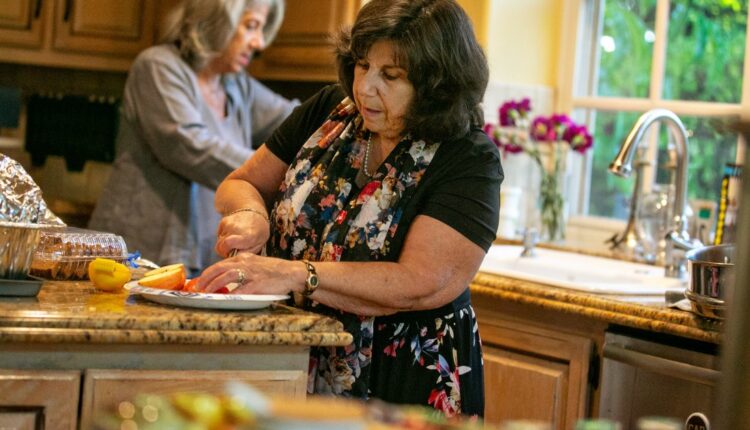 Ring in the Jewish New Year in the middle of a wildfire.

The rabbi still wears white, a symbol of purity and a new beginning, but instead of reading the Torah from the Bima, the synagogue’s stage, he stands in an Airbnb in Santa Rosa, California, with his wife and children in the other room.

The actual synagogue, the center of Jewish life, is empty and the winding mountain roads that lead to its gates are closed, patrolled by police and fire officers, and sometimes the National Guard.

The Torah scrolls are not in their usual home called the ark, nor with the rabbi in Santa Rosa. They have been evacuated from the temple and rest in the empty bedroom of an upstairs ward in a Nevada ward, covered in a traditional white and blue tallit, or prayer shawl.

On Monday, parishioners from three temples that were once near the path of the Caldor Fire logged on to Zoom during the Rosh Hashanah services.

“We welcome this new year with a new resilience, because we know that we call it that,” intoned Rabbi Evon Yakar, 42.

Last month the fire blazed through Pollock Pines in Caldor, displacing members of a ward. Then, in the last days of the month – and in the Hebrew calendar year – high winds drove the flames toward the Lake Tahoe Basin, threatening to destroy someone else’s homes.

On August 30, thousands of people were forced to evacuate South Lake Tahoe, including many of the 65 families that make up Temple Bat Yam.

The events of the following week put to the test the small, dispersed Jewish communities in the area that began to come together when Yakar, the former rabbi of Bat Yam Temple in South Lake Tahoe, became the spiritual leader of the Hebrew Congregation of North Tahoe.

When the COVID-19 pandemic halted nationwide religious gatherings and Tahoe communities moved Shabbat services online, they were joined by a third temple, Temple Or Rishon in the eastern Sacramento Valley.

Then the fire from Caldor threatened to break through the Echo Peak and rush towards the Bat Yam temple days before Rosh Hashanah when Jews began to ask God for two things.

Pamela Taylor, a Caldor evacuate, watches as her niece Ashley Dadon prepares to cut the challah bread at their families’ Rosh Hashanah dinner in Calabasas.

Pamela Taylor, who has lived in South Lake Tahoe for three decades, was about to evacuate in mid-August when she noticed ash from another fire, the Tamarack Fire, raining from the sky into her lunch.

By August 26, the Caldor fire, which began explosively in the densely forested area south of Pollock Pines, had burned 136,000 acres and made the air toxic.

Taylor drove her blind, insulin-dependent dog into her red Subaru the next day. She packed her daughters’ birth certificates, marriage certificate, home insurance documents, and family vaccination cards and set off.

As she drove the 500 miles to her daughter’s home in the San Fernando Valley, the approaching New Year weighed heavily on her.

As one of the holiest holidays for the Jewish people, Rosh Hashanah marks a 10-day period of reflection and repentance leading to Yom Kippur, when Jews believe God inscribes and seals names in the book of life.

On Highway 395, Taylor was concerned about her town and Temple Bat Yam, where she made a home after moving from the Valley to South Lake Tahoe in 1991.

But she was most concerned about her 35-year-old husband, Chris, who was left behind to take care of his 91-year-old father.

“You think about what we say year after year,” said Taylor, tearing himself up on the first night of Rosh Hashanah. “Who should live and who should die? Who should be consumed in the fire? “

On August 29th, from his Airbnb in Santa Rosa, Yakar watched a monstrous glow of fire rise over Echo Summit, threatening the small, forested towns of Christmas Valley and Meyers, and just below Temple Bat Yam. The converted parish was secured in US forest service land.

The rabbi was concerned about his close friends who were fighting the fire and his neighbors who were trapped without cars; for the people who probably couldn’t afford a hotel room even if they were to flee. For a temple member in Christmas Valley with severe hearing loss and another who was evacuated while in hospital with COVID-19.

He was also concerned about the temple’s two Torah scrolls – one handwritten for the Temple Bat Yam community, the other a Holocaust scroll that survived the Nazi public bonfires with holy Jewish books.

Yakar asked church members Charna and Allen Silver to drive into the smoldering countryside and evacuate the Torah from the Bat Yam temple. They did.

Former President of Temple Bat Yam, John Kuzmik, drove through the smoke to the Silvers house and evacuated the sacred scrolls a second time. A firefighter is launching a controlled fire to fend off a point fire that broke out on a ridge behind a store on Highway 50 in Strawberry, California on Aug. 28.

With the South Lake Tahoe fires still raging and the fate of his own home still in jeopardy, Kuzmik had no idea whether he and his wife would be evacuated next. “We knew for sure,” he said, “that the Torah would accompany us everywhere.”

As the fire loomed over Bat Yam Temple, the community’s neighbors across the lake were busy in the North Tahoe Hebrew Congregation and Or Rishon Temple in the eastern Sacramento Valley.

On August 27, Mary Frank, the director of education and communications, nicknamed “the magician” for her logistical skills during the disaster, sent a survey to each member of the Temple Or Rishon Ward, the greatest of the three. She asked who had room in their homes for evacuees or resources they could lack.

Dozens did so, including Tim Herman, a dentist in Roseville, and his wife Pam, who offered to house a Temple Bat Yam family in their second home in Truckee, 40 miles north of the flames.

When Frank put Taylor in touch with the Hermans, she learned that the evacuee’s father-in-law needed a special chair to sleep on. She immediately called a Rent-A-Center in Reno and got a black electric chair for four weeks for $ 135.

A day and a half later, Chris Taylor drove his father from a hotel to the Hermans house. Relief came over him.

Warm choral music greeted parishioners as they came to the Rosh Hashanah services on Monday evening.

“L’shanah tovah tikatevu,” sang the cantor of the Or Rishon temple from a bright bima. May you be enrolled and sealed for a good year.

Yakar began with a greeting familiar to those who had logged into church services online in the past 18 months.

“I think we’re all too familiar with ‘Zoom’ but keep that in mind,” he said, his eyes smiling. “Stay silent unless you have a reason to unmute – and you know who you are.”

Hundreds of men, women, and children crouched on couches and in kitchens in the remotest corners of California. Families who had been evacuated by the fire a week earlier sat next to those who offered them shelter.

Alexis Wagner, 62, affectionately known as “Bubbe Alexis” in the community because she likes to feed others, logged in from her daughter’s apartment in Napa. With her were the few things she’d brought from her home in Tahoe before escaping the fire – including a pair of plain brass Shabbat candlesticks that had belonged to her grandmother.

Caroline Matera, 63, and Richard Matera, 54, sat in their South Lake Tahoe home after returning exhausted that morning. As the fire approached, the couple first evacuated to Mammut. But days later, eager to serve, they drove across the Nevada state line and spent the week volunteering for the Red Cross at an evacuation center in Reno.

At the end of the service, Temple Or Rishon Rabbi Alan Rabishaw gave a final blessing. Hours earlier, the mandatory evacuation orders had been lifted and the residents of South Lake Tahoe would begin their journey home. 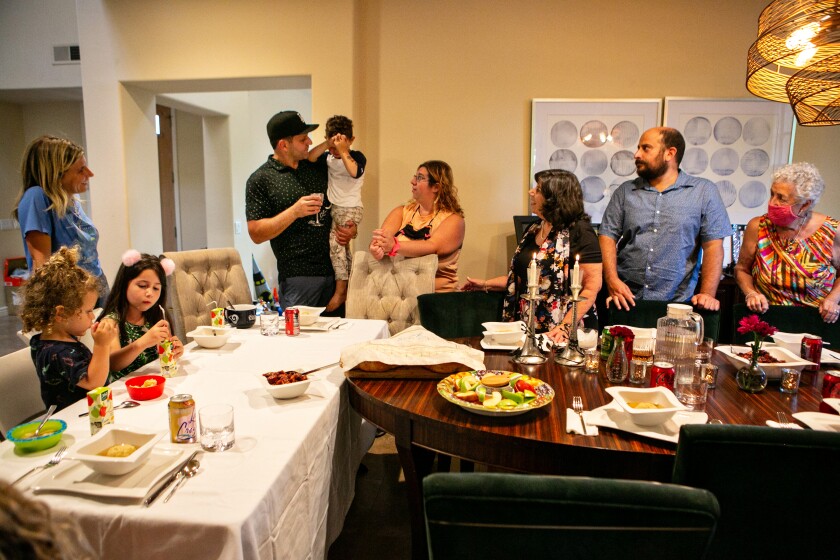 “Know that your walls are there to protect you,” said Rabishaw, “and when the walls cannot protect you, you have fellowship around you, on the hill and down the hill, who love and hug you, like we know you would do it for us. “