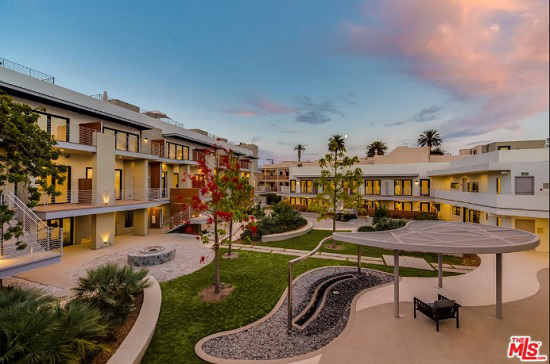 October 4, 2021 – A 38-unit refurbished apartment building that was the subject of a fierce battle to maintain affordable housing in Santa Monica sold for $ 70 million, the seller announced on Monday.

The former rental control building at 301 Ocean Avenue, built in 1952, was owned by Malibu-based Marquis Property Company, Ltd. according to information from CBRE, which represented the seller, sold to an Asian private investor.

Eric Chen, who represented the buyer on the deal, said the new owner “intends to hold this property as a long-term investment.”

“They view this asset as a cross-generational asset and appreciate the total renovation the seller has undertaken to transform it into the most unique, premium building on Ocean Avenue,” said Chen.

The property was “completely remodeled and remodeled between 2015 and 2017, including reducing the number of the original 47 units,” according to CBRE sales agents Laurie Lustig-Bower and Kamran Paydar.

The original property was developed for a booming middle class by Hoover, the city’s first mayor, and her husband Chester A. Hoover shortly after World War II. The couple changed it fundamentally in 1958.

The prime oceanfront location at the north end of Ocean Avenue sparked heated arguments when property values ​​skyrocketed in a city run by liberal rental advocates.

In 2007, a Texas contractor attempted to demolish the complex and replace it with luxury condominiums, which would have marked the first condominium complex on Ocean Avenue in two decades.

The property was purchased by Trammell Crow, who withdrew the property from the rental market under California’s 1986 Ellis Act. Between 2008 and 2009, the new owner evacuated all tenants from the 47-unit complex.

In 2016, the city granted a use permit for the 1 acre property, paving the way for Marquis to renovate the property as a 38-unit luxury apartment complex (“Pitched Battle Over 1950s Ocean-Front Apartment Building in Santa Monica Ends Quietly , “August 17, 2016.”)

The overhaul paved the way for the recent sale of the property, which includes a fitness center, courtyard, yoga studio, business center, and 24-hour concierge service.

“This beach community is spectacular in every way,” said Paydar. “The high-quality equipment package, the unsurpassed location and the sea view offer the new buyer a very special advantage in Southern California.”

Lustig-Bower: “We are pleased to have achieved a record price for the seller and to have supported an international buyer in acquiring this trophy.”

Taxpayers and anti-vaccine cops and firefighters