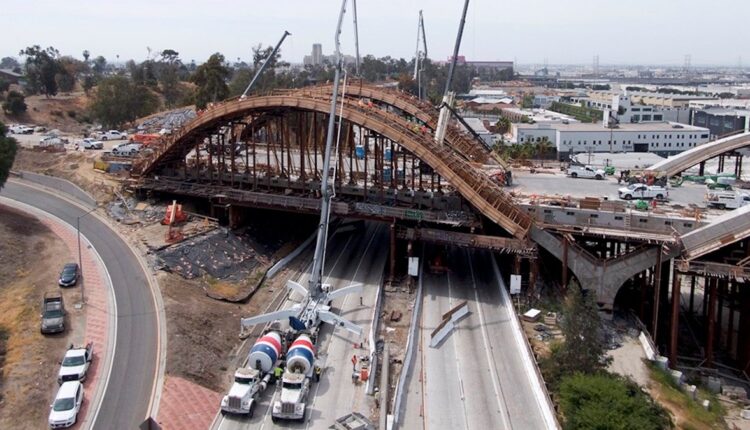 The 101 Freeway will be closed in both directions this weekend due to construction on the new Sixth Street Viaduct project east of downtown Los Angeles.

The closure, the first of two weekend shutdowns this fall, begins at 10 p.m. on Friday and is slated to end at 3 p.m. on Sunday. The crews will remove temporary frame supports that have held up bridge arches.

The closures will take place on the east side of the viaduct construction site in Boyle Heights. A 2.5 mile section of the freeway will be closed from Interchange 10/101 to Interchange 5/10/101 east of downtown Los Angeles.

Motorists traveling west on the 60 Freeway from the Pomona area will not be able to access the 101 Freeway.

During the closure, the crews will remove structures known as falsework that supported arches over the 101 Freeway. Cable suspensions were attached along the arches, which enable them to stand independently without falsework.

The new bridge, known as the Lichtband, will replace the original viaduct structure from 1932. The viaduct has served as a backdrop for scenes from films, television programs, commercials, and music videos over the decades.

The new viaduct is expected to be completed in summer 2022. It will include 10 sets of LED-lit, color-changeable arches that are 10 feet wide with a typical arch span of 300 feet.

Click the map below to view a larger version.

When traveling north on the 5 Freeway from the Orange County area and approaching the 5/10/101 interchange:

When traveling west on Freeway 60 from the Pomona area and approaching Interchange 5/10/101:

When traveling south on the 101 Freeway from the San Fernando Valley and approaching the 10/101 Split: