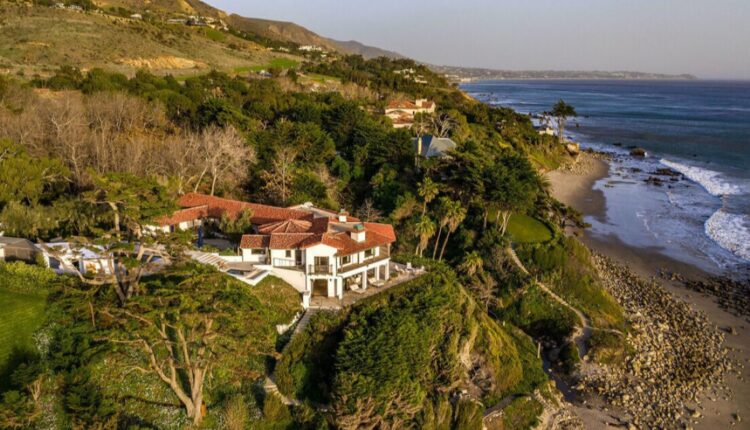 Malibu’s latest trophy home just surfaced for sale on a bluff above El Sol County Beach. The coastal estate is owned by “Yellowstone” actress Barret Swatek and retired hedge-fund manager Adam Weiss, who are shopping it around for $99.5 million.

That’s more than double the $45 million they paid for the property in 2018, records show. At $99.5 million, it’s the sixth-priciest home currently on the market in Los Angeles County and the second-priciest in Malibu.

Weiss and Swatek, who also appeared in “The 40-Year-Old Virgin” and “American Housewife,” bought the place from supermodel Cindy Crawford and her husband, businessman Rande Gerber. The couple are trading one coast for another after dropping $45 million on a mansion in Hawaii — one of the priciest home sales the state has ever seen.

Sprawled across more than 3 acres, the estate centers on a 7,450-square-foot villa built in the 1940s but updated since. Pocketing walls of glass take advantage of the coastal setting, and the two-story floor plan rises to a terrace overlooking the ocean.

Elsewhere are four bedrooms, 5.5 bathrooms, a media room, living room, den, dining room, gourmet kitchen and gym with vaulted ceilings. Out back, patios and scenic lookouts surround a swimming pool, spa, tennis court, meditation deck and cabana with a fireplace. At the edge of the property, a private path descends to the beach.

During their four-year stay, Swatek and Weiss spruced up the grounds with lush landscaping.