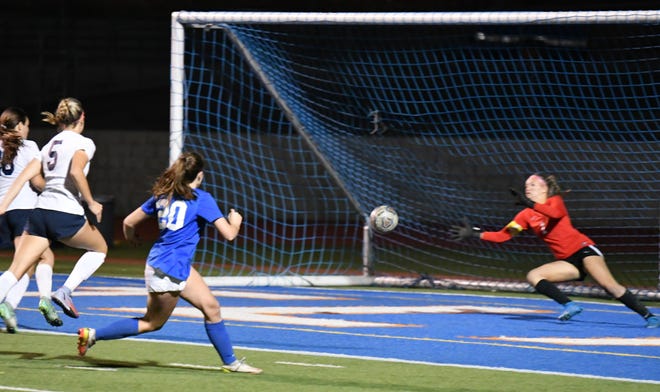 Tatum Wynalda had two goals and an assist as the top-seeded Westlake High girls soccer team survived an early scare to advance to the second round of the CIF-Southern Section Division 2 girls soccer playoffs with a 3-1 win over visiting Santa Monica Saturday night.

“It was a good first-round test for us,” Westlake head coach Frank Marino said. “We’re in Division 2, where every team is good. And they were pretty good. The three center mids and the wingers were good players.”

After going behind in the 27th minute, Westlake responded with two goals in a three-minute span that bridged halftime.

Playing in the second round for the second straight season, Westlake (14-1-4) will host Vista Murrieta (12-4-6) on Wednesday.

Moorpark 2, Garden Grove-Pacifica 1: Goals from Gianna Foss and Ellie Easley carried Moorpark, which responded after going behind in the first half.

Foss’ equalizer just before halftime was a pivotal moment.

“They got after it in the second half,” head coach Mike Alexander said.

In the second round for the third time in four seasons, the Musketeers (12-5-1) will visit Harvard-Westlake (12-1-4) on Wednesday.

Oaks Christian 6, Royal 0: Pepperdine bound-winger Erin Zeile scored two goals, Sara Spears had a goal and an assist, and Avery Odor and Abby Seawright had two assists apiece as the Lions roared into the second round.

“The girls played well this year,” head coach Sebastian Alvarado said. “It was good to get that first game out of the way.”

Scarlette Druian drove in a 30-yard free kick into the upper corner and Jada Mauch, Berkeley Mape also scored goals for Oaks Christian (15-1-4), who will visit West Ranch (12-3-2) on Wednesday.

After letting a 1-0 lead slip in the final 10 minutes of a first-round loss last season, Oaks Christian wasn’t letting up, and scored three times in each half.

Oxnard 1, South Torrance 0: Freshmen Allison Ruiz converted a breakaway after being put through by Priscilla Martinez to score the game’s lone goal and put the Yellowjackets into the second round for the fourth straight season.

“If we were going to let their physical play dictate the flow of the game, I thought it might give us some real problems,” head coach Andrew Aguailar said. “But we stayed real composed on the ball. It was good for the kids to do that under pressure.”

Senior Jaemi Toledo kept the shutout in goal for Oxnard, which will visit Orange Lutheran on Wednesday in the second round.

Newhall Hart 2, Oak Park 1: The Eagles (7-6-3) were eliminated on a decisive goal with four minutes left in overtime.

“Our injuries got the best of us,” said head coach Kathryn Klamecki.

Thousand Oaks 3, Quartz Hill 0: Sam Forde scored from a free kick and a penalty kick and Chloe Cole scored from Leah Forde’s assist as the Lancers exploded for three goals in the second half to move on.

Ventura 2, Beverly Hills 0: Esja Moore had a goal and an assist and Peyton Mendez kept a clean sheet as the Cougars advanced to the second round for the third time in five years.

Moore scored from Lilia Duque’s corner kick in the 36th minute and Allie Nichols scored off a Moore assist in the 63rd minute for Ventura (12-6-2), which will host Mayfield (16-2-2) on Wednesday.

“They had a tall forward who was fast,” head coach Jesus Cordova said.

“They had a really good midfield and they took their opportunities to finish,” head coach Patty Gomez said. “We put up a good fight. We just couldn’t finish on the limited opportunities we had.”

Thacher 10, La Puente 0: Jordan Yates netted a hat trick, Hattie Hatton had a goal and two assists, Pippa Harris had two goals and an assist, and Maddie Lee scored two goals as the top-seeded Toads opened the postseason with a rout. Lily King earned nine shutout of the season in goal.

Thacher (11-1-1) will visit the winner of Monday’s first-round match between Yeshiva and New Roads on Wednesday.

Have the Los Angeles Rams ever won a Super Bowl?