Would you live in an 8×8 foot house? Mini villages are being built to help tackle LA homelessness 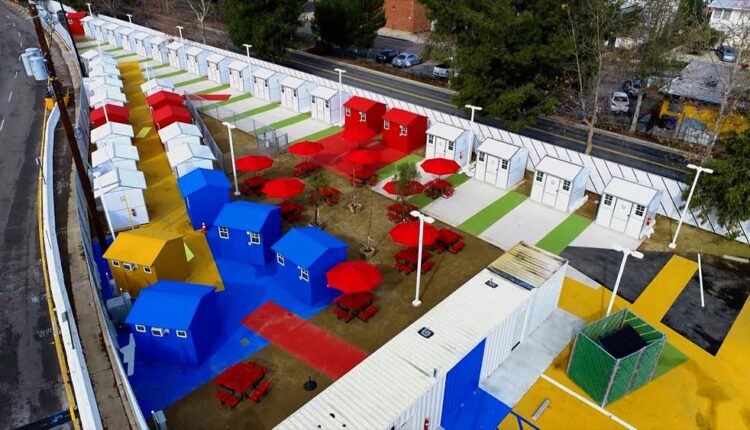 In Los Angeles, villages of tiny houses are being built to tackle the city’s massive homelessness crisis – made worse by the COVID-19 pandemic – and to help people who live on the streets lead normal lives again.

Local officials say homelessness has turned into a humanitarian crisis in Los Angeles and the number of people living in need has increased since the pandemic.

There are more than 60,000 uninhabited people in Los Angeles County according to the latest census, but charity leaders say it’s closer to 80,000 to 90,000.

Three months to build a village

The developers hope that each of these little houses will create a feeling of hope, safety and security for the people who now live in them.

In contrast to traditional homeless shelters, these small dwellings measuring 2.4 x 2.4 m can be built quickly, with the installation of an entire village taking around three months.

Ken Craft, Founder and CEO Hope of the Valley Rescue Mission, says the villages exist to prevent, reduce and eradicate poverty and to provide long-term solutions and emergency relief.

“We recognize that this is not the solution, but part of the solution to addressing the homeless and humanitarian crisis, not just here in Los Angeles but around the world,” said Craft.

“Why? Because these special units can be deployed and set up, they can be put together in an hour and once they’re set up, now someone actually has an emergency shelter, with temperature control, with a bed, a front door that locks, so we know how valuable it is to bring people into the house. “

The villages offer various services to help people get back on their feet.

Each person receives their daily necessities, a case manager and an apartment navigator to help them find permanent housing, as well as with vocational training and placement.

They are also offered psychological support and substance abuse services.

Los Angeles city councilor Paul Krekorian, who represents part of the San Fernando Valley and is a proponent of the tiny home concept, says the villages are a success story of innovative, affordable, and scalable solutions that other cities can recreate.

“This property was an unused parking lot,” said Krekorian.

“It was often with illegal landfills and warehouses etc. here.

“But it’s really important to the surrounding community too, and when the communities understand that, they will be much more supportive of the types of solutions cities need to implement to tackle homelessness.”

Villagers are subject to rules

In order to live here, the residents have to adhere to strict rules.

There is a curfew from 10:00 p.m. to 6:00 a.m. with exceptions for people with different working hours and people being searched before they can enter the community.

There is no tolerance for drugs, alcohol and guns, but unlike normal homeless shelters, pets are allowed.

The premises, which are under video surveillance around the clock, are surrounded by a security fence and everything that is not allowed in the community can be stored in a private locker in front of the gate, where a security guard has the key to prevent theft.

According to 58-year-old Steven Smith, the village was a lifeline.

Smith, who ended up on the street after his mother died, says the village gave him discipline and a framework in which to live.

“This teaches you to get your bum home early when you are housed so you don’t get entangled in anything,” he said.

“Go to work, be responsible for what you do, because in the moment you are responsible for everything you do from that moment on, and that is the bottom line. You don’t get a pass for anything else. They have no security net to say, well it’s his fault or it’s their fault, no it’s your fault “.

Chandler Tiny Home Village was the first to open in February 2021 with 39 homes and 85 beds. Now the charity operates a total of six villages in North Hollywood.

The developments were designed by the architect Michael Lehrer and his colleagues.

They say they chose bold colors to create a sense of happiness that makes residents upbeat and ready to reconnect with society.

But also to enable the villages to blend in seamlessly with residential areas so that the neighbors want to welcome them.

Teacher says cities that want to build what he calls “bridge villages” have to get everyone on board, not just city officials.

“Everyone involved from the community, city agencies, designers, builders and everyone else must be on the same page. You have to act in partnership. They need to act like they are formal partners. This is the only way we can achieve excellent results and bring the ball forward. These projects are a challenge. They test people’s patience and will, and when everyone works together it’s amazing how quickly and effectively great results can be achieved. “

The Valley Rescue Mission claims that most residents will usually be placed in permanent shelter within four to six months.

The unit is then free to accommodate another person seeking a roof over their head, hot shower, meal, and coping skills for a better life.