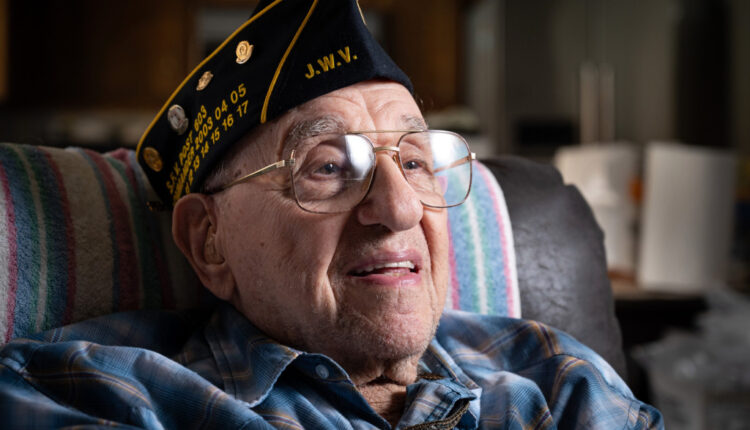 “I promised my beautiful wife that we would celebrate our 100th birthday together, but unfortunately she died nine years ago. We were married for almost 70 years. ”- Paul Cohen.

Well, Frances, your husband did it. Surrounded by his family and pals from Post 603 of the Jewish War Veterans, San Fernando Valley, Paul celebrated his 100th birthday last Sunday.

They rolled out the red carpet for him, and even Los Angeles City Councilor John Lee came by to give him a beautiful scroll from the city. The last time someone honored him like this was in 2013 when he was named Los Angeles County Veteran of the Year.

Talking about the goosebumps he felt midfield at the Rose Bowl midfield of the UCLA Washington game, he received a long, loud, standing ovation. The cheering was so loud that he could hardly hear himself speak.

That moment in the sun sparked a rush of old memories from WWII when there was no cheer for a young Jewish corporal surnamed Cohen.

“I was assigned to a heavy weapons unit that trained in amphibious warfare,” he says. “Almost immediately I encountered anti-Semitism from other troops and my commanding officer. He wanted to move all Jews and blacks to the Aleutian Islands, but we were lucky and a high-ranking officer stopped the transfers. “

But life in this unit would be miserable for him if he stayed, so Paul switched to a cannon company as a forward observer. He was 24 when he received the Bronze Star for his bravery in the Battle of Okinawa, where he crawled 20 meters through open terrain to rescue his wounded platoon leader and carry him back to a medical supply station by heavy enemy fire.

He saved the man’s life, Paul was a hero. But because his last name was Cohen and his religion was different, he wasn’t worth serving under an anti-Semitic commander. It wasn’t the first time that he was discriminated against.

“When I was 16, a friend and I traveled to North Carolina and tried ourselves on professional baseball teams. We knew Jews and Blacks weren’t allowed, so I took fictional names when I tried it out. One coach liked what he saw and invited me to stay and play for his team.

“When an old coach saw me play, he asked the current coach how I was doing? ‘Travis is fine.’ The old trainer asked, “Who is Travis, you mean Clint, right?” I was sent home immediately.

“People talk a lot about discrimination these days, but that goes back many, many years,” says the man who has lived 100 of them. Until now.

He misses you, Frances. All the memories you shared, the good times and the bad times, like your honeymoon when you got the measles.

“Not very funny, but years later we both still laughed about it,” he says. And now those laughs go out to your kids, grandchildren, and great-grandchildren who have inherited the same love for baseball that Paul still has, made up names and everything.

At 98, he was still on the softball field with his son and grandson, helping his great-grandchildren Laney and Coco prepare for a new season of competitive softball.

By the time he turned 95 he had resigned as Commandant of Post 603, but he never left. At 100 he is still there as the quartermaster at every meeting. He says he needs his friends, Frances, and they need him, it’s that simple.

“I keep telling my family that I might retire and act like an old man, but they just laugh and say this will never happen. You’re right, it won’t. I don’t smoke, don’t drink, don’t drink dope or marijuana, I love Pepsi Cola, and I eat three meals a day.

Sports Letters: Laker’s non-youth movement has a geriatric feel to it