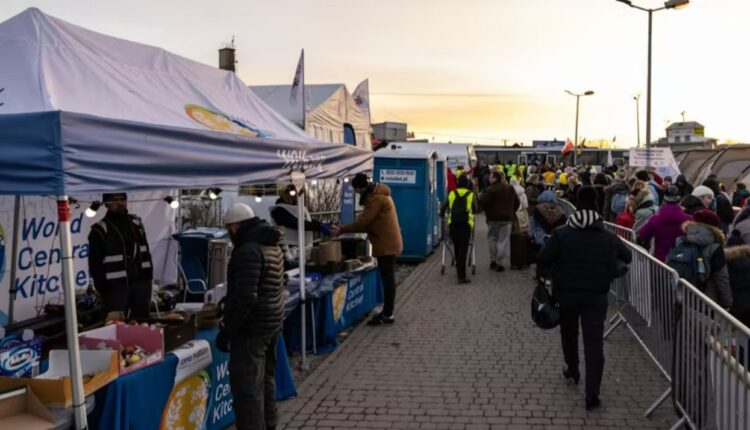 He and his team were in Lviv, Ukraine, which had been considered relatively safe until it was hit by Russian missiles this weekend. He is just one of the hundreds of volunteers and World Central Kitchen staff who have provided more than three million meals and groceries for Ukrainians fleeing Russian violence within Ukraine and at food distribution sites in its neighboring countries.

In an interview for “LA Times Today,” Kilcoyne spoke to host Lisa McRee about the group’s mission.

“Myself and a couple of other team members flew to Romania to start because there was, you know, folks explaining to all the countries surrounding Ukraine. We started operations in Romania, Moldova and Hungary. We wanted to make sure that we covered all of the borders to be able to help everybody as much as possible,” Kilcoyne said.

Kilcoyne detailed where the World Central Kitchen sites are and how they’re helping refugees beyond Ukraine’s bordering nations.

“Poland has the largest influx of refugees that were fleeing Ukraine. We quickly set up our own headquarters in Poland because this is such a major operation. This is the biggest operation that we’ve done. We keep saying that every single year, but This one is huge. We’re in five different countries immediately around Ukraine. But we’re also providing meals now in Madrid and Germany to shelters that are accepting refugees. The US just announced that refugees are going to be going to the US We have a lot of people on the team that are here in Poland on the ground.”

“We started working with restaurant partners, restaurant chefs,” said Kilcoyne. “Chef José always says every single restaurant in the world is our partner. They’re part of World Central Kitchen family. They just may not know it yet. Chefs and restaurants automatically jump in and start doing amazing work. That’s how we can move faster, tapping into those systems that are already up and running with existing restaurants and chefs.And that’s exactly what we were able to do .We’re providing meals all along the border for those that are leaving the country, to make sure that we provide them with something hot.People want warm food.It’s springtime here.But the weather was extremely cold when I first got here. With so many women and children to give them something not just for themselves, to nourish them, but also for their comfort, for their hands.”

Interacting with the people whose lives have been upended by the war in Ukraine has been a poignant experience for Kilcoyne. He shared how seeing their strength hath impacted him.

“I have my wife and four-year-old at home and I’m constantly thinking about them just because there are so many families that are leaving. And there’s a lot now that are remaining, mostly here in Lviv and other surrounding cities that are further west. We’ve met so many amazing people. There was a little girl that was jumping on a trampoline at a park where we’re set up as a distribution point here in Lviv. She was just bouncing on that trampoline without a care in the world. And if you look over at her mother, and her mother has all this luggage that she’s carrying by herself. The weight that her mother is carrying, not only the luggage, but just personally. It was great to see her jumping on the trampoline with a smile and giving her mom a rest, and she had a sandwich and a bowl of soup from us,” he shared.

There is no timeline for when the World Central Kitchen will leave Ukraine and nearby countries, even amid the unpredictability of the war. He said the priority is to make sure people are fed nourishing meals and served a bit of hope. Kilcoyne detailed how people can support World Central Kitchen.

“Go to our website and follow us on social media. Every donation goes directly to feeding families. It isn’t just the restaurants that we’re working with to provide the hot meals. We’re also sending out groceries, sending those further east for families that are remaining. Whatever we can do to get food where it’s needed is what we do, and our teams are doing an amazing job doing that right now,” Kilcoyne said.

To donate to the World Central Kitchen, visit WorldCentralKitchen.org.

Should You Get a Fourth Dose? – NBC Los Angeles