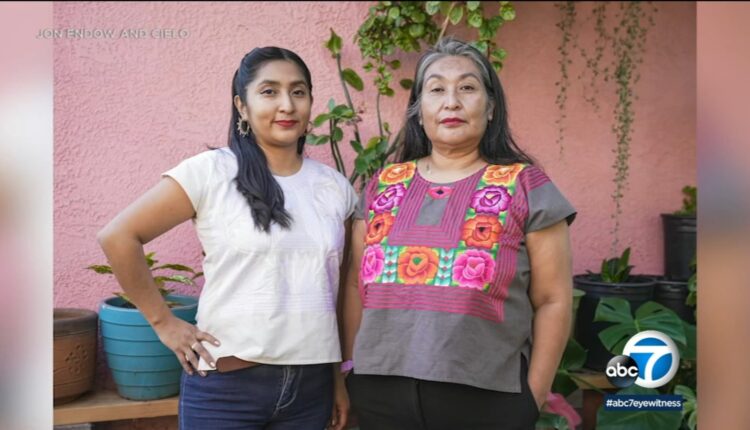 LOS ANGELES (KABC) — “Cielo” is the Spanish word for “sky” or “heaven.” It’s the acronym for a Los Angeles-based organization serving Indigenous migrants.

“We provide interpretation to around 500 indigenous migrant people here in the United States,” Martinez said.

When Romero arrived to the US from Mexico as a 10-year-old, she only spoke Zapotec, a language native to Oaxaca.

“Nobody knew that there were other languages ​​besides Spanish in Mexico,” Romero said. “I became an interpreter out of need.”

Once Romero learned English, people in the community began asking her to translate paperwork. Decades later, she is still working to meet those needs – now teaming up with her daughter to establish Comunidades Indígenas en Liderazgo (CIELO.)

“I’m really grateful to everybody that has trusted CIELO, that has approached us for help,” Martinez said.

CIELO trains and empowers interpreters to serve indigenous communities from across Latin America.

Their research is filling in gaps in government data like the US Census.

“This data is historic. It has created some changes at the city and county level,” Romero said. “Once you have the data, then you exist.”

With CIELO’s help, the LA County Board of Supervisors unanimously passed a motion aimed at helping the Department of Children and Family Services better identify and support Indigenous families.

“I’ve personally interpreted for families that their child were taken away because of the language,” Romero said. “When a kid was given the medication in the wrong amount, they assumed it was like child endangerment but it was a language barrier.”

The stakes are high in places like hospitals, too. Romero urges institutions to ask the right questions.

“A lot of people assume that everybody that comes from south of the imposed border, they only speak Spanish,” she said. “People fail to acknowledge that in Mexico, there are 364 languages ​​spoken out of the 68 Indigenous language families,” adding there’s also a diversity of Indigenous languages ​​in countries like Guatemala and across Latin America.

CIELO is expanding its reach outside of linguistic services. During the pandemic, they launched a solidarity aid fund that provided $500 to $1,000 to people impacted by the pandemic. Many of them are restaurant workers.

“The majority of it was going to rent. A lot of people would say, ‘thank you so much I paid my rent.’ But then there was still the issue of the food insecurity that many families were experiencing,” Martinez said.

So they took a holistic approach, becoming a food bank, a COVID-19 resource and vaccine center, and even opened their offices to the Mexican Consulate in Los Angeles. Through that temporary mobile site, hundreds accessed important resources like getting an ID card every week.

“A lot of people that maybe didn’t have their parents teach them their language or share a lot about the cultural background – we created the Indigenous literature conference to be a bridge where we bring different generations together,” Martinez said.

These two Zapotecas are just getting started.

“We’re serving a large population, but we know there’s a bigger population out there,” Romero said.

Price is Right 50th anniversary tour will come on down to cities across the US : NPR