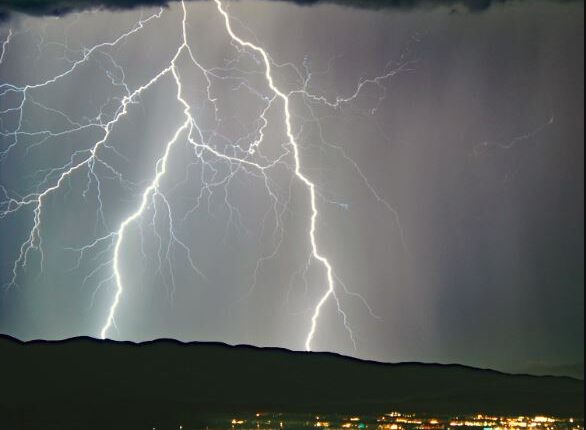 The monsoon-like storm system led to scattered power outages, the closure of a college campus and temporary beach closures in some coastal areas.

In Pico Rivera, the deadly lightning strike occurred around 8:50 am as the woman was walking along the San Gabriel River, according to the Los Angeles County Sheriff’s Department. The woman, who was not immediately identified, died at the scene, officials said. The two dogs also died.

A passerby saw the woman in distress on the pathway and called 911 around 9 am. and fire officials determined that, based on the injuries, she had been hit by lightning, according to sheriff’s Capt. Jody Hutak.

The woman’s death led Pico Rivera’s city manager, Steve Carmona, to warn the city’s public works staff and other city workers in the field, telling them to stay indoors. The city also closed the golf course on the north side of the city, canceled the local farmer’s market and directed that summer camp be held indoors, he said.

The unsettled weather also shut down several local beaches along the Orange County and Long Beach coastline, as lighting strikes were reported near the shore. Shorelines were back open by the afternoon.

Huntington Beach from Beach Boulevard to Seapoint Avenue, as well as the Huntington Harbor public areas and Sunset Beach area, were among the first to close at 8:30 am due to nearby lightning strikes, said Huntington Beach Marine Safety Division Chief Eric Dieterman.

He said they thought it would be a quick episode of turbulent weather, but it kept “rolling through” during the morning hours.

A bolt of lightning strikes this morning just off the Laguna Beach coast as a blustery storm moved through Southern California. More details @ocregister pic.twitter.com/TqLxtdjJDo

A strong storm cell developed early Wednesday over the Pasadena area, prompting the National Weather Service to warn of potentially gusty winds, lightning and even hail in parts of the San Gabriel Valley.

By daybreak, forecasters said the eastern portion of the county had been “overrun with showers and (thunderstorms).” Most areas received that showers saw relatively low rainfall totals, generally less than a quarter-inch, but forecasters warned of potentially higher amounts in select areas.

In Pasadena, lightning struck a palm tree by Manzanita Avenue and Clinton Street around 8 am on Wednesday which caused a small power outage, said Lisa Derderian, city spokeswoman. The fire was quickly put out, she said, and fewer than 20 accounts were affected by the outage, she said.

Callers also reported seeing smoke near Eaton Canyon and Henninger Flats in the forest at about 9:30 am, she said. The US Forest Service asked the Pasadena Fire and Los Angeles County Fire Department for assistance, Derderian said.

E32 assisted ANF & LAC on a lighting strike above Henniger Flats called “Eaton Fire”. Due to access issues UTV32 was used to shuttle crews to the fire line. pic.twitter.com/7nqdz6e6Te

Firefighters also responded to several calls of smoke in the forest due to lightning, according to Dana Dierkes, spokeswoman for the Angeles National Forest.

They’ve had hundreds of lightning activity within the past 24 hours, she said. But Dierkes pointed out that not all lightning hit the ground.

The map below shows lighting activity (polarity) in red plus (+) symbols and blue dashes (-). Some lighting never hits the ground. pic.twitter.com/IDtltBpfRj

La Verne police asked the public to avoid the area of ​​8th Street and Marco Court in the morning after lightning hit a transformer, but cleared the scene in the afternoon. The strike caused a power outage, leaving 74 customers without power as of 4:30 pm, according to Southern California Edison.

Dozens of power outages related to storm conditions were reported across the region as of Wednesday afternoon, according to SCE.

Cerritos College closed its campus for the remainder of Wednesday after a lightning-caused power outage, the college said.

Campus is closed for the rest of the day due to a power outage caused by lightning. If you are on campus, please safely proceed to leave and go home. We will update you as more details emerge. Sorry for the disruption. pic.twitter.com/4qS8Rlxj8H

In Whittier and the unincorporated county areas near the city, residents reported seeing hail. Reports of hail also came in from the Big Bear area, according to Casey Oswant, a meteorologist with the NWS.

While much of Los Angeles County saw storms off and on Wednesday, the weather system will shift to the mountains and the desert areas, according to Ryan Kittell, meteorologist with the NWS. Areas around Hemet and Beaumont could see some scattered showers throughout Wednesday evening and night, according to Oswant.

“For most of the metro area it will be most active this morning,” he said. The amounts of rain will vary with some areas getting a tenth of an inch, Kittell said.

While Orange County residents saw thunderstorms, lightning and thunder, there was no significant rainfall, Dan Gregoria, meteorologist with the National Weather Service, said Wednesday morning. “The showers and storms will disappear and die off (Wednesday night),” he said. “There would be isolated thunderstorms over the mountains Thursday afternoon.”

The highest total rainfall as of midday Wednesday in Los Angeles County was 1.02 inches near Chilao Flat in the Angeles National Forest, Kittell said. Between one-quarter and half an inch of rainfall was reported throughout the western San Gabriel Mountains up into the Antelope Valley, said Kristen Stewart, meteorologist with the NWS.

A flash flood warning was issued for the San Gorgonio Pass near Whitewater until 6:30 pm after half-an-inch of rain fell in 15 minutes, Oswant said. Roadway flooding was reported through the area, she said.

Gregoria said a tenth of an inch of rain fell in Orange county and the Inland Empire from Tuesday night to Wednesday morning. But in the mountain areas, he said around helped an inch fell.

On Thursday, Kittell said we might see showers or thunderstorms in the mountains and desert areas in Los Angeles County in the afternoon.

There is a slight chance of thunderstorms Thursday in the desert areas, Gregoria said.

The mercury is expecting to hit the mid 80s to 90s in the inland areas of Los Angeles County which includes the San Fernando Valley, the San Gabriel Valley and downtown Los Angeles on Wednesday, according to Kittell. The beach areas will be in the 70s, he added.

Thursday’s temperatures will be 85 to 95 degrees but not as humid, he said. The beach areas will still be in the 70s but less humid.

The highs along the coast in Orange County will be in the 70s and around the 90s in inland areas like Anaheim on Wednesday, Gregoria said. High temperatures in the Inland Empire will be in the mid-90s, he added.

The temperatures will be about the same on Thursday, Gregoria said,