With deaths from car accidents soaring, what can government do? 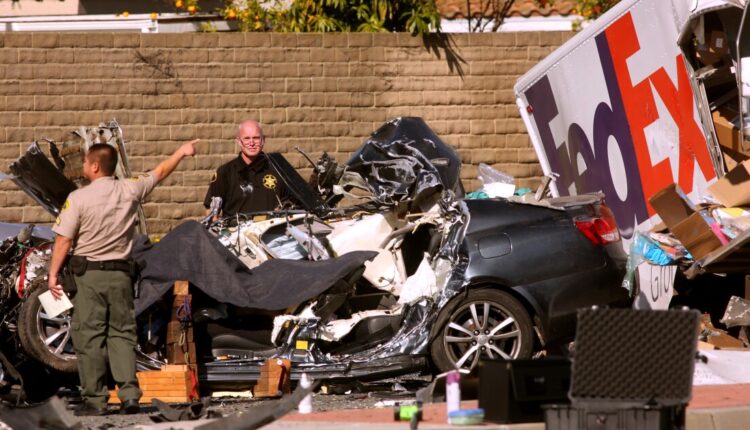 The plan, called the National Roadway Safety Strategy, would be paid for by funds from the Biden administration’s $1-trillion infrastructure law, with the impossible-sounding goal of “zero roadway fatalities.” It would incorporate what it calls a “safe system approach” that acknowledges human error and physical frailty and designs a transportation system that minimizes the chance for death or serious injury when crashes occur.

New federal data to be released next week will show that fatalities have spiked nationwide, Buttigieg told the Associated Press in an interview before the plan was released.

“It doesn’t look good, and I continue to be extremely concerned about the trend,” Buttigieg said. “Somehow it has become over the years and decades as normal, sort of the cost of doing business. Even through a pandemic that led to considerably less driving, we continue to see more danger on our roads.”

Traffic collisions killed 294 people in Los Angeles in 2021, city officials said Thursday, a 24% increase from the previous year. The number of bicyclists and pedestrians killed by drivers also rose last year compared with 2020.

“For generations in this country we have prioritized cars, speed and capacity on our streets, over people,” Seleta Reynolds, general manager of the LA Department of Transportation, said Thursday. Today, federal transportation “leaders have signaled a huge culture shift that puts safety first, with a clear strategy that includes funding, actions and timelines.”

Reynolds called the plan “a tremendous win for cities like LA, where we’ve been implementing a safety-first approach for years … With the resources and focus of the federal government, we have a much better opportunity to address the wave of traffic violence that has torn apart far too many families and communities in our city and nationwide.”

Overall fatalities from traffic collisions in LA had remained flat or dropped only slightly in the years before the pandemic, frustrating activists who want to see more progress on a city program to end traffic deaths by 2025.

That program, Vision Zero, was launched by Mayor Eric Garcetti but needs more funding and attention from city leaders to be effective, transportation activists say.

Michael Schneider, founder of the Los Angeles-based advocacy group Streets for All, said he was encouraged by Buttigieg’s attention on making the roadways safe for all modes of transportation.

“It is so refreshing to see a Transportation secretary recognize that the purpose of roads isn’t just to get cars through as quickly as possible,” Schneider said.

The 42-page plan acknowledges the uneven pain caused by traffic deaths. The fatality rate is about twice as high in rural areas as it is in US cities, it said. The nation’s poorest counties have a higher death rate from roadway collisions than the nation as a whole.

“Fatalities among Black people increased by 23% between 2019 and 2020 compared to an overall increase of 7.2 percent,” the report stated. “People who are American Indian and Alaska Native have roadway fatality rates more than double the national rate on a per population basis.”

Over the last decade, deaths of pedestrians and bicyclists have risen faster than roadway fatalities as a whole, which has had a “chilling effect” on human-powered climate-friendly modes of transportation.

The plan would focus on developing means to more accurately measure drug and alcohol impairment and require state driver licensing agencies to “take licensing actions against commercial drivers who have drugs or alcohol violations in the system and are not cleared to return to duty.”

It would push local governments to plan, design and construct safer roads, efforts that would be paid for with federal funds. It would prod automakers to incorporate crash-avoidance features such as automatic emergency braking into new passenger vehicles. And it would focus on shortening ambulance response times when collisions occur.

“Unfortunately, many roads are not designed to ensure safe travel at safe speeds for everyone, especially the most vulnerable road users,” Stephanie Pollack, deputy administrator of the Federal Highway Administration, said in a written statement. Funding provided by the infrastructure law will allow state, local, federal and tribal governments to incorporate “safety for all users into every federally-funded road project.”

Shannon Frattaroli, a public health researcher at Johns Hopkins University who focuses on injury, has long studied the troubling road traffic fatalities. On Thursday, she welcomed news of the plan.

Frattaroli said that transportation infrastructure in the US has long been designed with the primary goal of moving cars as quickly as possible, rather than moving people as safely as possible. She believes roadways should be designed with imperfect drivers in mind.

“In the United States, we’ve had way too much emphasis on the driver behaving safely, and not enough on the road itself,” she said. “We know that people can’t be safe all the time, and when they make mistakes, we don’t want them to be deadly.”

Buttigieg “is headed in the right direction,” she said, “But I’m looking for this vision to be realized. There are a lot of good ideas, and I’m optimistic, but I have an appreciation for the work that needs to happen now.”