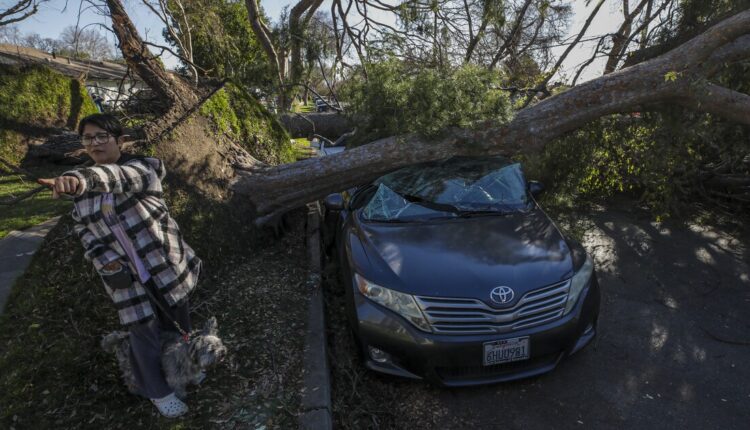 In Los Angeles County, where a strong wind warning was in effect until 3 p.m. Saturday, gusts of up to 89 miles per hour were recorded on Mt. Lukens in the San Gabriel Mountains, said Mike Wofford, a forecaster with the National Weather Service in Oxnard.

Southern California Edison reported 92 outages as of 10:00 am, affecting 24,554 customers in its service area. Approximately 20,298 of those customers were located in Los Angeles County.

“The winds can topple power lines or send debris flying through the air, so we urge customers to exercise as much caution as possible,” she said.

Any power lines that are down should be assumed to be live and people should never approach them, she said.

Some outages could be extended due to extensive damage, Ornelas said, and recovery times were uncertain as of 5:45 p.m

“Customers can rest assured that crews are on site and we are working to restore their power supply as soon as possible,” she said.

The winds prompted the South Coast Air Quality Management District to issue a dust warning that was in effect Saturday noon through Sunday noon. The worst air quality was expected in the Inland Empire and Coachella valleys on Saturday, regulators said.

Those in areas affected by high levels of dust were advised to remain indoors with windows and doors closed and to avoid vigorous physical activity.

Downed trees and power lines were also recorded across the Bay Area, including in Oakland and Berkeley. The Weather Service extended a strong wind warning for the North Bay Mountains until 4 p.m. Sunday.

In Sonoma County, a 96 mph gust was recorded at a weather station in Healdsburg Hills east of Geyser Peak, where a brush fire broke out around 1 a.m. The fire was contained to about 1.4 acres a few hours later. There was no word on its cause.

Winds were breezy with occasional gusts of 20 to 30 miles per hour in the Big Sur area when a bushfire broke out in Palo Colorado Canyon Friday night, said Brooke Bingaman, a weather forecaster with the Monterey National Weather Service. Overnight offshore winds caused the fire to move northeast-southwest toward the coast, she said.

As of Saturday morning, the Colorado fire had grown to 1,500 acres, crossing Highway 1 and forcing people from their homes. About 500 people have been ordered to evacuate, said Cecile Juliette, a public information officer with the California Department of Forestry and Fire Protection.

The American Red Cross opened an emergency shelter at Carmel Middle School. Highway 1 was closed from Andrew Molera State Park in the Big Sur area to the Granite Canyon Bridge in Carmel-by-the-Sea with no expected reopening.

The cause of the fire was determined. One building, a yurt, was confirmed damaged Saturday afternoon, Juliette said. No injuries were reported.

“It’s very unforgiving terrain,” Juliette said. “It’s incredibly steep and forested, there are big trees, including a lot of redwood, a lot of big scrub. Lots of steep drains, very difficult to access.”

She attributed the fire’s rapid spread to a poor overnight humidity recovery, with a lack of coastal fog and gusty offshore winds drying out vegetation.

“It’s very unusual to have a fire of this size in this area so close to shore in January,” she said.

Although January fires are not unheard of in California, they are typically associated with a drier winter, which came after a series of wet storms, with fuel humidities in the range of normal for January, Bingaman said.

“This fire is a bit unusual as we had the wet atmospheric flow in October and then again in December,” she said.

It’s possible that the long-term, climate-change-charged drought that continues to plague the region means that relatively recent rains and cooler winter weather are no longer enough to prevent fires from growing, she said.

“Much of the West has been in various stages of extreme to exceptional drought in recent years,” she said. “This will be looked at by the firefighting community by taking a closer look at the fuels in this area.”

Despite the rain that fell a few weeks ago, so-called fine fuels like grasses, ground litter and twigs were extremely dry with about 5% humidity, Juliette said.

That’s because offshore winds can dry vegetation “down to zero in a very short period of time,” said Cal Fire’s Captain Jesse Barnes.

The fire burned in the scar of the 2016 Soberanes fire, he said. Unlike the Soberanes Fire, which featured large, rolling flames, the Colorado Fire’s flame length averaged only about three to four feet because there was nothing to carry the fire into the trees, he said.

At the same time, the fire history meant there was plenty to burn, he said.

“If you think about all that dead and dying stuff that was in there from the fire, there’s a bunch of fuel in there,” he said. “All those trees that haven’t burned, all those big trees on the ground, it’s all just dry fuel to burn, unfortunately.”

Winds in the area were expected to remain lighter throughout Saturday, ranging between 5 and 10 mph with gusts of 12 to 15 mph, Bingaman said. The calmer conditions helped the firefight.

“This is a good reminder that people should continue to be ever-vigilant and prepared for the possibility of wildfires in the West, particularly when we consider offshore winds that may amplify them,” she said.

Fire officials also described the blaze as another indication of the constant risk of fire that has become the state’s new normal.