William Zabka Injected His Love of Hair Metal Into Johnny 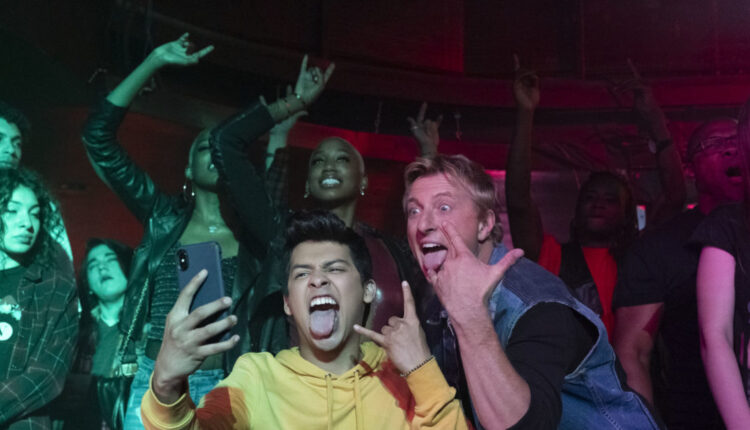 As if there was any doubt, Cobra Kai star William Zabka helped infuse his own musical tastes into his signature character of Johnny Lawrence with his love for hair metal and ’80s rock. The soundtrack plays a huge role as we hear in the Netflix series with such hits as Poison’s Nothing’ But a Good Time, Ratt’s Round and Round, and later, we get a father-son type bonding moment between Johnny and student Miguel Diaz (Xolo Mariduena) attending a (Twisted Sister frontman) Dee Snyder concert. Zabka spoke with Guitar World about what rocks his world while filming the fifth season.

“Yes, Billy Zabka does love hair metal,” Zabka said. “I lean more toward the Def Leppards, the Whitesnakes, the Van Halens. I’m all things ’80s rock. That was my music.” The actor originally played the role of the prized student of Cobra Kai in the 1984 John G. Avildsen film The Karate Kid and reprise him for the 1986 sequel as the bully-turned-rival to film protagonist Daniel LaRusso (Ralph Macchio). While driving his father’s Volvo to what ended up being his first film role, Zabka’s recalled blasting Dio’s Rainbow in the Dark to the audition.

“I got there, walked into this room with all these karate black belts, and everybody was out Johnny-ing the next guy,” Zabka said. “It was tense, and the energy pushed me back out of the room and into my dad’s Volvo. And I sat there with my little cassette player and cranked up some Zebra. It helped me to not get psyched out.” Like his co-star Macchio, Zabka also benefitted from the success of the film with his continued presence on film and television not even minding to poke fun at the fame Johnny Lawrence brought him on How I Met Your Mother. One thing he does have over Macchio is an Oscar nomination.

Zabka recalled the time he initially got into playing the guitar. “It was a way to try and fit in and meet some friends,” he said. “I would go to a little park, Shadow Ranch [in the San Fernando Valley] and learn guitar with a bunch of guys and a nylon string.” He even competed in a high school Battle of the Bands with his group Siricon. “We played against Fishbone,” he recalled with a laugh. “Angelo Moore, John Fisher, I went to high school with those guys, and they were running around onstage with horns, playing all this crazy jazz and fusion-type music that no one had ever heard before. Here’s an even crazier story: In junior high school Angelo lived across the street from me, and when they first started the band, they didn’t have a lot of instruments. So I had a little keyboard, I had an amplifier, and they would come and use my stuff and I would jam with them.”

Other Music Stories from the Cobra Kai Star

The actor decided how he wanted to balance film and music early on. “I went to college at Cal State Northridge and entered the film school, and then I got cast in ‘The Karate Kid.’ “So as far as my career was going, I was headed to film. But music was the other thing that fed me artistically and creatively. And that’s also why I never chose not to pursue it professionally – it’s something I don’t look to get.” anything back from, outside of just the joy of doing it.” For more on how Zabka jammed with co-star Robert Downey Jr on the set of Back to School, finally living out his rocker dreams performing at Hollywood’s Whiskey a Go-Go, his 2015 guitar lesson from Eddie Van Halenand coming full circle with Cobra Kai, you can go to Guitar World.