Why a Whopping LA Could Support Homeless Camp Banning 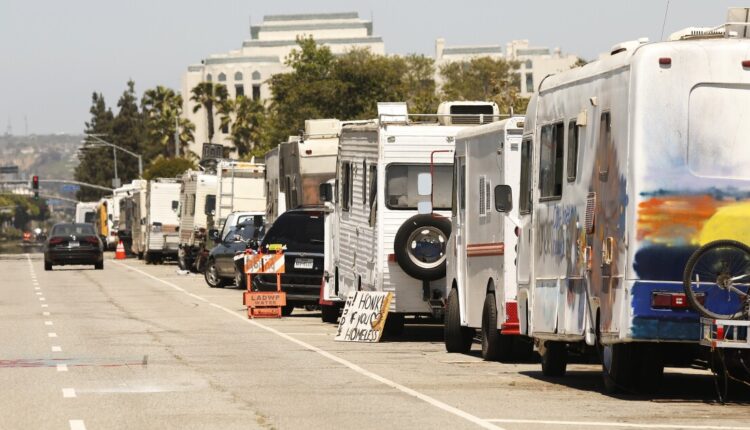 Scott Culbertson got into conflict. Not to mention frustration. And sad. And disappointed. And, frankly, just full.

Angelenos, I suspect many of you can relate to this.

For almost two years, the CEO of Friends of Ballona Wetlands watched with dismay as a warehouse of broken RVs and buses became a permanent fixture on Jefferson Boulevard, west of Lincoln Boulevard in Playa del Rey.

When I spoke to Culbertson that summer, he told me how the few dozen residents frequently invaded the Ballona Wetlands Ecological Reserve and the adjoining freshwater swamp, leaving piles of rubbish and causing bushfires.

Not much has changed since then. If anything, it has gotten worse, both in terms of environmental damage and the equally obvious but far less measurable – and more importantly – human suffering. I live nearby and see it every day.

Culbertson had set his hopes on the town’s promise to clean up the camp regularly. And for the most part, the city pulled through. It just doesn’t look like it.

“Everyone who lives there knows the game now,” he told me a few hours after a pointless cleanup before Thanksgiving. “As soon as the plumbing workers leave LA, everyone is clearing their belongings.”

For the past few months, Culbertson has been at a loss as to what to do next other than wait for action on some new city guidelines that could step up enforcement.

“Even the most liberal people like me have started to lose patience with homelessness,” he admitted.

I pondered my conversation with Culbertson as I listened to LA Alderman Joe Buscaino on Tuesday as he put up a flimsy election measure that would ban homeless people from sleeping or camping in any public space if they refused housing or lodging .

“We all agree that the only solution to homelessness is housing,” he told his fellow councilors. “Why should we continue to allow someone to live on public land when there is a safer, healthier alternative? If we allow camping in public, even if there are safer alternatives, we are allowing someone’s addiction to take their life. “

Buscaino wants to give every mayor the power to forego land use and zoning rules “in order to urgently start homeless housing projects” and to promote the construction of emergency shelters.

“Contrary to what you hear from lawyers and others, someone here is not being criminalized for not having a place to sleep,” he said on Tuesday. “If no suitable shelter is available, there will be no enforcement.”

Buscaino claims he is driven by “compassion” and “compassion” for the tens of thousands of Angelenos who live on sidewalks and under highway bridges. But he is also running for mayor on a platform to take action against the camps.

He also has a habit of assuming that many homeless people will not accept help because they are struggling with drugs or mental illness, when in reality many are simply too poor to afford shelter. So there are many reasons to question the purity of one’s motives.

So it’s not entirely surprising that the city council stabbed. Instead of approving or denying Buscaino’s request to receive the city attorney’s draft for his vote, they sent him to the Homeless and Poverty Committee for revision.

Some, including Councilor Mike Bonin, were particularly concerned as their focus on enforcement and homeless people en masse could be forced into temporary shelters.

If only LA was ready for it.

In response to the council’s action, Buscaino’s campaign pledged to collect the 65,000 signatures required to bring the measure to voters in June 2022. He also criticized his colleagues in a campaign email, saying they were “more interested in the right to sleep on the sidewalk than the right to a home”.

What is striking about this rhetoric is how similar it is to what Sacramento Mayor Darrell Steinberg recently said. And unlike Buscaino, Steinberg is known in political circles for having compassion for the homeless, both as an author of the California Mental Health Services Act and as co-chair of a statewide task force on homelessness.

Earlier this month, the mayor introduced what he calls the “right to housing”. It would require the city to provide enough permanent housing or, more likely, temporary shelter – be it sanctioned tent cities, hotel rooms or tiny homes – for every homeless person – or face potential lawsuits – by 2023.

Steinberg’s plan was better received by the Sacramento City Council than Buscaino’s by the LA City Council. But in both cities the homeless and progressives are united in their opposition.

“I understand the fear that this is just a hidden way to deal with the issue of tent camps and clean up the city,” Steinberg said recently during a council meeting. “My motive is not to make life difficult for people, but to bring people into the house, because I think it’s terrible to live outside in these tent camps.”

And like Buscaino, he has also criticized those who would defend people’s right to sleep outside.

In fact, elected officials across the state are trying to figure out what to do with camps. The degree of aggressiveness is different. But they all want to be able to move many uninhabited people to other, mostly makeshift locations and then clean the streets.

The trend seems to be driven by a collective understanding that this post-pandemic reality of ubiquitous homeless people is unsustainable. And more importantly, it’s also a tacit admission that despite the valiant politics and taxpayer dollars spent, the permanent and affordable housing that California officials keep promising as a solution will likely take years, not months, to build.

That way, the difference between what Steinberg wants to do and what Busciano wants to do is basically splitting hairs. Just as LA is already doing, authorizing the evacuation of certain camps around parks and libraries after all residents have been given shelter or protection.

There are legitimate questions about whether any of this will turn out to be legal. The Boise vs. Martin decision prohibits the issuing of tickets or the detention of the homeless for sleeping or camping on public land unless there is alternative accommodation. These answers will come over time.

For now, however, there are moral questions that need to be answered by the Californians.

Is it human to allow people to live in camps, get sick, and die too often, knowing that they will likely wait years for shelter? Or is it more humane to find legally questionable ways to get people into shelters, even when sometimes doing it against their will and requiring law enforcement intervention?

Like Culbertson, I got into conflict. I feel it every time I drive past those RVs parked on Jefferson Boulevard and I see a homeless man stumble into traffic between them. Scott Culbertson, executive director of Friends of the Ballona Wetlands, gave a tour of some of the destruction caused by homeless camps entering the freshwater swamp in June. “Just pushing someone off the sidewalk doesn’t solve the problem,” he says.

I know that criminalizing homelessness, be it issuing tickets or something more drastic, is not the answer to everything.

“I don’t know what enforcement means,” Culbertson told me. “I hope it doesn’t mean arresting people, because arresting someone for illegal camps doesn’t solve the problem. It just moves the problem from my house to your house. “

Nor does he think the answer is to clear camps a few at a time, for better or for worse. And i agree.

The answer, says Culbertson, is housing. Definitely permanent and affordable housing. Homeless people deserve it, just like everyone else. And homeowners need to be ready to accept construction in their neighborhood.

But is that a realistic answer? Can LA build homes at the scale and speed it takes to make a difference? He is unsure.

“During the pandemic you had to cut corners because there wasn’t much you could do. But the city has a lot of money to solve the homelessness problem and very few permanent housing has been built. ”

“I think we’re all frustrated.”