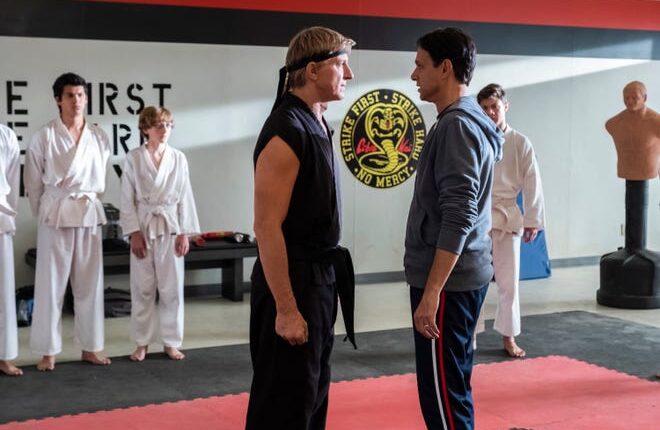 A Netflix reboot of the Robert Mark Kamen Karate Kid films, Cobra Kai has become one of the most popular shows on the platform and has just debuted its Season 4 chapter.

Cobra Kai was created by Josh Heald, Jon Hurwitz, and Hayden Schlossberg and sees Daniel LaRusso and Johnny Lawrence return to the dojo decades after their showdown at the 1984 All Valley Karate Tournament, and the show welcomes new characters to the dojo as well.

What is the season 4 tournament?

The All Valley Karate Tournament is an annual competition in the San Fernando Valley, California.

Each dojo in the valley introduces its best students to compete to become the champion, and the fights are judged by a jury of karate experts.

The tournament made its debut in 1968, and the Cobra Kai Dojo first participated in the 1970s, winning the competition four times.

However, the iconic dojo was banned in 1985 after Barnes, Silver, and Kreese committed unethical acts.

Image from the Netflix Media Center.

Who won the All Valley Karate Tournament? Was it Cobra Kai?

Technically, Cobra Kai won the All Valley Karate Tournament in season four, but there’s a twist – let’s explain it.

In the fourth season finale, it was revealed that Terry Silver had deceived himself and bribed himself through the tournament in order to guarantee the victory of Cobra Kai.

The audience is told that Silver paid the tournament referee to tip the competition in Cobra Kai’s favor.

Silver eventually planned to pin Kreese on the attempted murder of Stingray as part of his plan to take on the role of Sensei from Cobra Kai.

Silver certainly looks like he’s going to be the season five antagonist, and a returning character who helps him run the dojo has also been teased.

How many episodes does season 4 have on Netflix?

Cobra Kai Season 4 has a total of 10 episodes in this chapter, which is the same number of episodes shown in previous seasons.

Below we’ve added an episode guide to all parts of Season Four so you can navigate Season 4 with ease:

Fans will be delighted to learn that the fifth season of Cobra Kai has already been confirmed by Netflix and the fifth chapter is expected to be released in late 2022.

Cobra Kai Season 4 is now available to stream on Netflix.

In other news, When Calls the Heart: Trademark Returns season 9 release date explored