Who Is the Man Accused of Attacking Dave Chappelle? – NBC Los Angeles 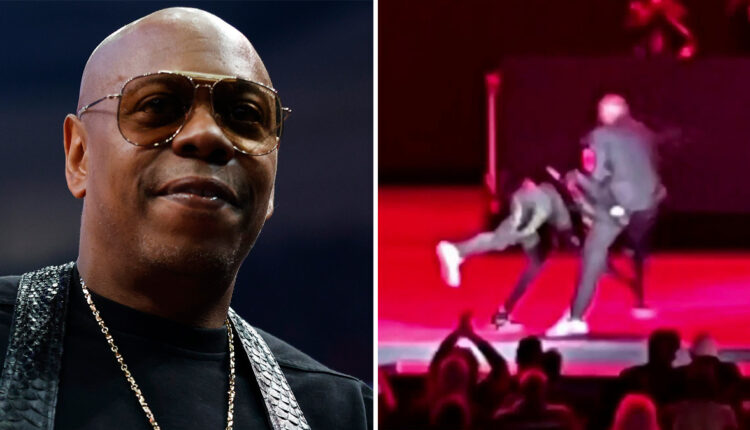 The suspect suspect of climbing onto the Hollywood Bowl stage and tackling comedian Dave Chappelle is scheduled Thursday for an initial court appearance.

Chappelle was not injured after the audience member rushed the stage and tackled him to the ground during a performance at the Netflix Is a Joke comedy festival. Security personnel took control of the man, then LAPD officers responded to the picturesque entertainment venue nestled in the Cahuenga Pass between the San Fernando Valley and Hollywood and arrested the suspect.

Here’s what we know about the suspect.

Who is the man accused of attacking Dave Chappelle?

Lee is being held in lieu of $30,000 bail following his arrest Tuesday night on suspicion of assault with a deadly weapon. The LAPD said Lee is a Los Angeles resident.

The suspect was hospitalized due to sustained injuries in the altercation with security team members, which was captured in several videos by audience members. Details about the extent of the injuries were not immediately clear, but photos taken after the altercation showed his arm bent at an odd angle.

TMZ reports that Lee is a self-proclaimed rapper. A song on his 2020 album is titled “Dave Chapelle’ on Spotify. Those details have not been confirmed by NBCLA.

It was not immediately known if he had an attorney who could speak on his behalf.

Lee was arrested on suspicion of felony assault with a deadly weapon. He is scheduled for a first court appearance, likely an arraignment, Thursday in a downtown Los Angeles court, according to jail records.

Judges typically state the charges filed against a defendant at an arraignment. It was not immediately clear what time Lee will be arranged.

Lee had not been charged by prosecutors as of early Thursday morning.

What kind of weapon did police find after the Dave Chappelle attack?

The weapon that police said was recovered from Lee turned out to be a replica handgun with a knife blade that can be ejected. It is unclear whether the suspect attempted to use the weapon, but police said he was pointing it at Chappelle when he climbed the front of the stage and rushed toward the comedian.

It was unclear how he was able to carry the weapon, photos of which were released by the LAPD, into the venue.

The Los Angeles Philharmonic, which manages events for the Hollywood Bowl, released a statement Wednesday afternoon.

“The safety of our artists, visitors and staff is the LA Phil’s top priority,” the statement read. “The incident that occurred at the Hollywood Bowl on May 3, 2022, remains an active investigation, and we are unable to comment further at this time. Please refer additional questions to the LAPD.”

Why was Dave Chappelle attacked?

That’s not yet clear.

A Wednesday police statement provided an account of the attack, but gave no indication of whether investigators had determined the motive.

Chappelle’s routine at the Hollywood Bowl included jokes and comments about increased security after widespread backlash over jokes he has made about the transgender community, according to Buzzfeed reporter Brianna Sacks, who was in the audience.

The comedy special “The Closer,” where Chappelle made comments dismissing concerns about transphobia from other public figures and comparing being trans to blackface, caused some Netflix employees and their supporters to stage a walkout in October 2021 in protest.

Chappelle’s jokes about increased security came before the man rushed the stage.

“The performances by Chappelle at the Hollywood Bowl were epic and record-breaking and he refuses to allow last night’s incident to overshadow the magic of this historic moment,” the spokesperson told NBC News in a statement. “As unfortunate and unsettling as the incident was, Chappelle went on with the show.”

Netflix issued a statement saying, “We care deeply about the safety of creators and we strongly defend the right of stand-up comedians to perform on stage without fear of violence.”

Jamie Foxx was nearby during the attack, and Chappelle thanked him for responding. After the unsettling incident, comedian Chris Rock joined Chappelle on stage and quipped, “Was that Will Smith?”

Chappelle was one of a list of comedians performing at the Hollywood Bowl amphitheater as part of the Netflix Is a Joke: The Festival, taking place from April 28 to May 8.

Other comedians scheduled to perform at the festival include Leslie Jones and Jon Stewart, in addition to Rock.