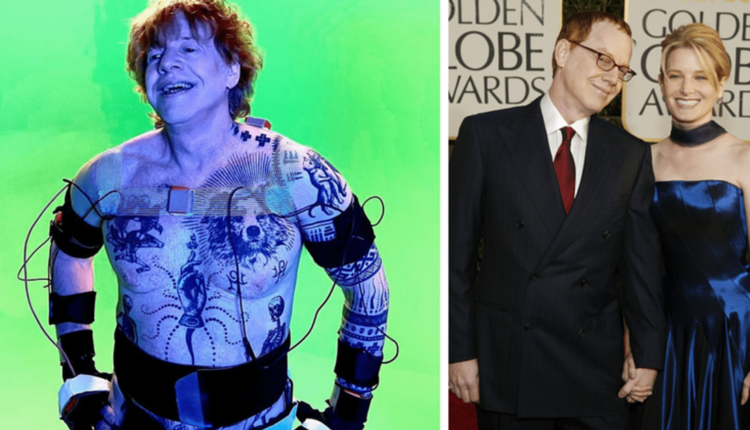 American composer Danny Elfman looks unrecognizable in a series of images posted to his Instagram. The 68-year-old is covered in tattoos as he opts for an edgier look. People are surprised by this transformation as they don’t recognize him with all the tattoos and long hair.

Actress Bridget Fonda made her first public appearance in 20 years on Wednesday. She was spotted driving Oliver, her 17-year-old son at Elfman, in her silver Land Rover. Fonda, who retired from acting in 2002, looked completely different from her last public appearance.

The 58-year-old actress’ last public appearance was in 2009, when she attended the premiere of Tarantino’s World War I epic, Inglourious Basterds. After that, Fonda stepped out of the spotlight to focus on raising her son in Santa Barbara.

“Bridget currently resides with Danny and their only son, Oliver, in two adjacent properties in Encino, a neighborhood in the San Fernando Valley region of Los Angeles,” reports the Daily Mail. “Bridget has led a quiet life since retiring from the acting world in 2002. The LA-based beauty is part of Hollywood’s famous Fonda dynasty, which also includes her grandfather Henry Fonda, father Peter Fonda and aunt Jane Fonda. She made her name in the acting world in the 1980s and 1990s after landing key roles in a number of box-office hits. Bridget famously starred as angst-ridden protagonist Allison ‘Allie’ Jones in the 1992 classic thriller Single White Female, adds the story.

Who is Danny Elfman?

Danny Elfman is an American music composer, singer and songwriter. According to Wikipedia, Elfman has received credit for composing over 100 feature film scores and compositions for television, stage productions and the concert hall.

The musician is best known for his film music for “The Simpsons” and has received two Emmy Awards, a Grammy, six Saturn Awards for best music, a Richard Kirk Award and the Max Steiner Film Music Achievement Award. He is married to Bridget Fonda and has been nominated for an Oscar four times.

Elfman posted a picture of himself in front of a green screen and wrote: “11th hour sorry damn! I hate being called a liar but… I promised to have a new single and video out every month until the album on the 11th and here’s the 11th and I don’t have a video… boo huh … Damn, we tried, but we’re just a little late. There’s a REALLY good video that’s almost done and it will be out on the 25th instead of the 11th. Forgive me… I tried. It’s been a really crazy month. Much love to everyone! Why am I connected to all these cables? Hmmmm… guess you’ll have an easy time seeing. (2/3) #BigMess #DannyElfman #AntiRecords #EpitaphRecords @epitaphrecords @antirecords”

Elfman also posted pictures of himself getting a tattoo, captioning it: “Showcasing Zoey Taylor’s beautiful handwork on my delicate skin. Keep an eye out for a pictorial documentation of my 35 year tattoo project next month… @zoeytaylor… .. #zoeytaylor #thewarrentattoo #BigMess #DannyElfman”

At best, the best seafood restaurant in Santa Monica