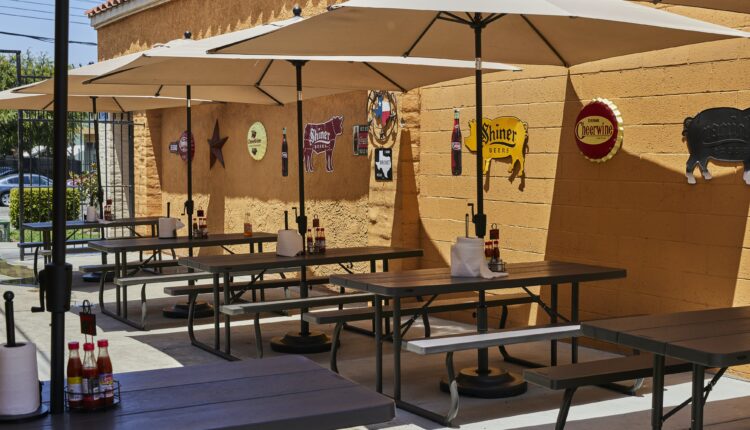 Between the actors, singers, and quasi-comedians who lead studio tours for a living, Los Angeles is full of people who have never grasped the concept of an inside voice. As a result, we all have a Loud Mouth in our lives we love (or at least tolerate) and occasionally agree to grab dinner with. But bringing such a person to the wrong restaurant might involve a few dirty looks or shaming “shhh!”s in your table’s direction. Don’t do that. Instead, take that human megaphone you call a friend to a place where the music is loud, the energy is bumping, and where you will receive zero eye rolls when they inevitably start oversharing about their latest bad decision. Here are 12 places to get dinner with someone who talks too damn loud.

Like many hot, new Hollywood spots, this swanky French brasserie is so noisy, you might consider bringing a walkie talkie to communicate with the person sitting across from you. However, your loudest friend will feel right at home, cheerfully yelling at the top of their lungs about love interests, upcoming vacations, and the sparkling water infused with adaptogens they’re currently obsessed with. Things we loved here: the lamb wellington covered in flaky puff pastry and a decadent black truffle risotto laced with Ibérico ham. Things we didn’t: a needlessly complex mackerel sashimi (why is it covered in baby vegetable escabeche?) and the winding stroll through the Hyatt Thompson lobby you have to take in order to get to the bathroom.

Unlike the time you took your friend to a hushed Italian restaurant where she proceeded to scandalize the entire dining room with intimate details on her recent breakup, Night + Market’s rowdy Venice outpost is perfect for high-volume disclosures. Although there’s no hard alcohol here, their wine list is one of the most expansive in the neighborhood and always introduces you to something new, natural, and funky. Make sure some form of larb, fried chicken, and noodles are on your table, and you’re in for a great time.

This Oaxacan institution in Koreatown is the perfect place to bring someone who, for whatever reason, does not seem to understand that the sacred art of conversation also requires a bit of volume control. Guelaguetza is known for its constant party-like atmosphere, which is only fitting, given the traditional indigenous festival it’s named after that features colorful costumes and lots of dancing. There’s plenty of indoor and outdoor seating available, a colorful patio with live mariachi music on certain days, and some of the best moles in town. They also serve over 150 different kinds of mezcal and tequila. We haven’t tested them all (yet), but everything we have tried, we’ve loved.

When an excessive dinner is in order, head to Grandmaster Recorders, at an Australian-ish spot on Cahuenga in Hollywood run by the EP & LP people. The massive space—multiple floors which include a dining room, open kitchen, lounge, and rooftop bar—taps into the building’s history as a former recording studio where Stevie Wonder, Bowie, and the Chili Peppers once made magic happen. Music and food hold equal weight, with early 2000’s R&B playing in the background and tropical cocktails hawking names like “Shake Your Money Maker.” It’s a huge place, so if your date confesses to tax evasion or walks you through the latest office drama at an ear-splitting volume, it’s likely the other tables will drown them out.

As you stare out at the vast, gray ocean across the highway from Neptune’s Net, you’ll be struck by how even the biggest, most destructive waves always return to the sea. Then a tow truck will loudly blast past you and save you from thinking even more pseudo-philosophical junk that probably belongs on a shirt from Target. But that’s why Neptune’s Net, a well-worn seafood shack in Malibu, is the perfect place for meals with those who can’t keep their thoughts to themselves: although the food’s not the best in the world (save for one wonderful clam chowder bread bowl), the sounds emitting from your friend’s mouth will be carried away with the wind, gone in a sea of ​​biker gangs, chatter amongst friend groups, and impatient drivers on the PCH.

If you’re reading this guide, it’s probable that you have some sort of one-on-one encounter with a chatterbox who’s done (at least one) form of musical theater and/or improv and has never shut up about it since. Take them to Ddong Ggo, informally the smokiest patio in Los Angeles, a Koreatown bar known for its overflowing ashtrays and towers of Hite beer. There are great bar snacks, like kimchi seafood pancakes and honey fried chicken, and although you might not spend your entire night here, Ddong Ggo is a fantastic place to kick off whatever hijinks you’re planning afterwards.

A meal at Carousel scoops you up and plops you right in the middle of Glendale’s rich Armenian community. The Middle Eastern restaurant is the social center of the neighborhood, a gigantic dining hall that’s a party almost every night of the week and filled with massive kebab platters, assorted meze, and shawarma guaranteed to feed a group of any size. It’s all set up like a wedding reception, with tables packed next to each other in uniform rows. Expect meats being lit on fire, lots of gossiping, and at least two or three birthdays being celebrated.

When Hop Woo opened in Chinatown back in 1993, there were only eight tables in the entire restaurant. Since then, the Cantonese restaurant has expanded—first into a larger space in its original building then to its current location across the street. Over the years, its become a neighborhood hangout spot, a place where you’ll find elder Chinese couples dining on spicy Sichuan-style fish next to tables full of raucous teens. In other words, no one’s going to notice a few loud talkers, so feel free to use your outside voices here.

Pijja Palace is an Indian sports bar and looks nothing like the image that just flashed in your mind. The interior is chic and sleek, with a pastel color scheme that would feel right at home on a Millennial vision board. Flat-screens cover every wall, forcing you to follow the graceful movements of a hockey player you’ve never heard of (but perhaps now love?). Pijja Palace feels like a real neighborhood spot for Silver Lake, a cacophony of aunties and cousins ​​and best friends and normal people on dates. The room fills up almost, so make sure you snag a reservation.

This classic Mexican restaurant in Silver Lake with bright pink walls and a kitschy theme has been a gay nightlife institution since the 1960s. It’s also famously loud and set up like a maze, so if your date goes on a diatribe about the so-called “evidence” that Kubrick faked the moon landing, you can slink into the shadows and plan a getaway. While you don’t need to cross town for Casita del Campo’s food, if you’re in need of lethal margaritas, enchiladas, giant burritos, or sizzling fajitas that could stop traffic, there’s no better place in the neighborhood to gather the loud- talkers

The energy at MUN Steakhouse ionically charged: vintage Usher blasts from the speakers, premium-grade steak sizzles as it hits the grill, and drinks are flowing. This KBBQ spot in Koreatown is every Extremely Loud Person’s aural dream, a place where they can shout directly into the waiter’s ear to request an extra serving of bacon-topped potato salad and not seem out of place. Meals here should balance MUN’s excellent meats (get the $200 variety combo which serves four people and includes flat-iron steak, honeycomb-cut pork belly, pork jowl, and short ribs) with fun, whimsical a la carte items like truffle shrimp and kimchi “bomb” noodles, an ice-cold soup akin to naengmyeon.

Ray’s BBQ in Huntington Park serves Texas-style smoked meats that rival ones made in the Lone Star state. Here, you’ll eat pulled pork cut to order and an extra-fatty brisket encrusted in black pepper that tastes like it was smooched by a big ol’ pillar of smoke. For those who have spent their formative years planted next to the biggest speaker at raves, there’s a nice breezy patio that’s usually filled with the sounds of children and cars whizzing past. Voices seem to get drowned out by everything else around it, so there’s no need to break a sweat when your friend inevitably starts shouting about their latest traumatic Airbnb experience.