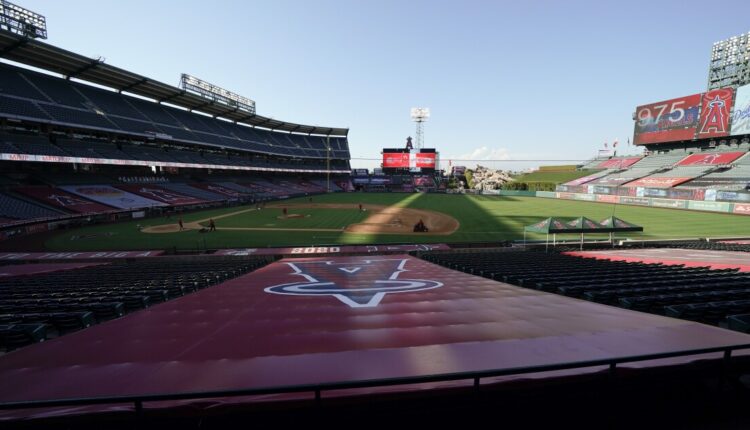 The finish line was in sight. After nine years of trying to anchor the Angels in Anaheim for the long term, the city was days away from finalizing a deal. One judge, one signature, done deal.

What happened next could have come straight out of Hollywood, with only the slightest of embellishment: California bursts into the courtroom, waving a federal affidavit in the judge’s face: Look here, judge, the FBI might be onto big-time corruption in the city ! Put a hold on this deal, your honor!

The judge did just that. In the end, perhaps the deal survives.

Or, since an FBI agent said the mayor slipped confidential information to the Angels as the city negotiated against them — in the hope of making a million bucks from them — perhaps the taint becomes too great for the city to stomach.

On the surface, the solution appears simple: redo the deal.

Here’s the problem: The Angels can just say no.

Dodger Stadium, circa 1962, is four years older than Angel Stadium. During the past decade, the Dodgers’ owners have invested $350 million into modernizing and upgrading their stadium. The new promenade beyond center field is a celebration of beauty and creativity.

During the same decade, the Angels have been trying to figure out what to do about Angel Stadium. In 2013, the team and the city commissioned a study that estimated the stadium needed $100 million to $150 million in infrastructure improvement to remain viable for the long term.

The city proposed that Angels owner Arte Moreno put up restaurants, shops, homes and hotels around the stadium — what the Dodgers did in center field, but on steroids — and use the money he made to renovate or replace the stadium.

The first Anaheim plan died, because the city would have rented the land to Moreno for $1 a year. The current plan could be on life support, even with Moreno buying the stadium and the surrounding land. The stadium is not getting any younger.

In 2018, when the Angels opted out of their stadium lease, the city had the right to assess an $8 million termination fee, or at the least to use that fee as leverage. Instead, three months later, the city reinstated the lease at no cost, and in the process forfeited more leverage by giving the Angels a place to play even if a new deal could not be reached.

So, if this deal collapses, the Angels remain committed to play at Angel Stadium through at least 2029, and they can extend their stay through 2038.

Would they move? Moreno spent millions in court to change the team name from Anaheim to Los Angeles, to take better advantage of the second-largest market in North America.

He looked at Tustin, but he balked when the city wanted him to pay for the land and the stadium. He looked at Long Beach, but there was so much more money to be made in Anaheim, where three times more land was available and the stadium was already built.

An artist’s rendering of the proposed changes to Angel Stadium in Anaheim.

So long as the Angels remain in Anaheim, at least under their current lease, they control development on the stadium property. The city could find a housing developer that wants to build there, but no homes can be built without the Angels’ consent.

That is why the city said it sold the stadium site to Moreno for $320 million, without taking bids. Who, the city asked, would pay a premium price today for country that could not be developed for a couple of decades?

The city could put the land up for bid now, with no great outcome. Perhaps a developer would bid more, maybe in partnership with Moreno, and in that case the city would not have gotten the most money for its residents without court intervention.

Perhaps a developer would bid less, and Moreno would respond by lowering his bid too. Perhaps he would decline to bid, since he has a lease on the property already and the city would have to honor it. He turns 76 in August.

The city has told Moreno twice within six years that they had a deal. Would he have the patience or trust for a third round of negotiations?

As an alternative, perhaps the city would take bids on the sliver of the property on which non-housing development is allowed no matter what the Angels say. In either case, the sale price — the return to Anaheim taxpayers for the city’s largest land asset — would be reduced.

The forecast could include this potential stalemate. Nothing happens on the property until the Angels’ lease expires — no revenue from the stadium sale and accompanying development to the city and its taxpayers; no dramatic upgrades to the stadium for the team and its fans; still nothing around the stadium except a sea of ​​parking lots.

In other words, what could happen with the Angels is what is happening now with the Tampa Bay Rays: a lot of talk, no action, and a few years until the lease runs out. The Rays, at least, have an aquarium.

The Anaheim City Council is scheduled to discuss the state of the Angel Stadium deal next Tuesday.

By Wednesday, a majority of the council had told Mayor Harry Sidhu — the subject of the FBI corruption affidavit made public Monday — that he would not be welcome at that discussion and should resign immediately.

That makes ironic this commentary Sidhu wrote for the Orange County Register in February, which appeared under this headline: “On Anaheim stadium deal, the truth will emerge.”

On Monday, maybe it did. I remember longtime Los Angeles County supervisor Zev Yaroslavsky once saying how he warned his staffers against any wrongdoing, even if they thought no one would notice, by telling them not to do anything they would not want to see on the front page of the LA Times .

On Tuesday, Sidhu was on the front page of the LA Times.