What were LA probation officials thinking? Public agencies should not put more guns on the street 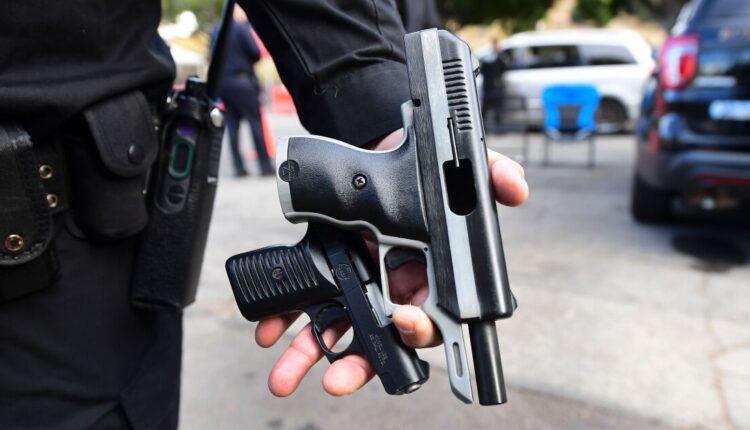 An auction website known as GovDeals was offering a “Big Lot of Firearms” made up of 337 Smith & Wesson and Beretta handguns with magazines. Many had never been fired. The highest bid as of Monday was $25,000.

The seller was the Los Angeles County Probation Department.

Supervisor Hilda Solis had spent two days at the shooting scene and at hospitals visiting survivors when her staff was informed by a Times editorial writer of the auction.

“I’m dismayed,” she said. She should be.

Solis planned to introduce a motion at Tuesday’s supervisors’ meeting to stop the sale and to get to the bottom of it. By Monday afternoon — after the fatal shooting of seven people in Half Moon Bay — the Probation Department had pulled out of the auction on its own. The current administration said in a statement it hadn’t known anything about the auction, and that it had been “initiated more than two years ago under the department’s former administration, which believed at the time this was the only option for disposing of the surplus firearms.”

The department said it will use an “alternative method” to unload the guns.

Law enforcement agencies periodically buy back guns from the public to melt them down and keep them off the street. It is hypocritical and worse than senseless if those guns are merely replaced by weapons to be put into circulation by the government itself.

The same can be said of the millions of dollars the county has poured into an Office of Violence Prevention to curb gun violence, if it’s simultaneously trafficking in weapons.

Good for Solis for demanding answers. Here are some more questions she and her colleagues ought to ask: Where did these guns come from? What “alternative method” will be used to dispose of the guns? What other county agencies (Sheriff’s Department, for example) use weapons and how do they dispose of them when they are no longer needed? How is it possible that so many Probation Department guns were never fired, even on a range? How long has the county been in the business of putting deadly weapons on the street?

And how on Earth could the current Probation Department administration and the Board of Supervisors be unaware of an auction like this going on under their own noses? And will county officials finally adopt policies that ensure more guns don’t end up on the street?

As States Seek to Limit Abortions, Montana Wants to Redefine What Is Medically Necessary