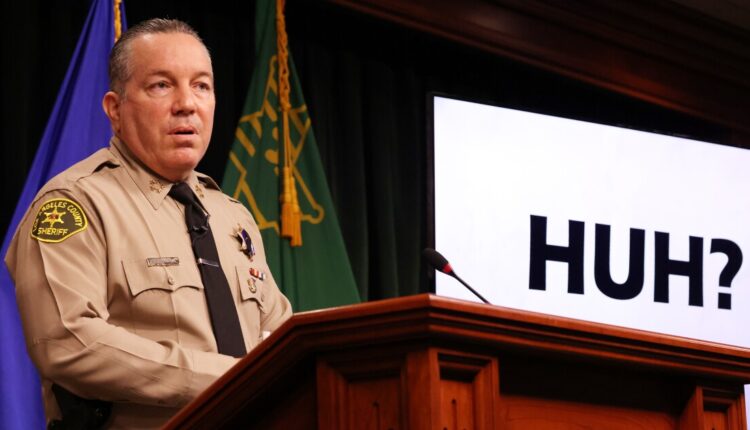 Shortly after my three-part series on Los Angeles County Sheriff Alex Villanueva was published last week, a longtime critic of mine went on Twitter to write: “Last night Harry Chandler came back from the dead 2 order the @latimes shoe shine boy to promote division among black & Latinos.”

He added: “They stroke divisions & use the taco guy for it.”

This same person had previously told the “taco guy” (yours truly), “Don’t talk to me like you want smoke little boy!” and called me an unprintable name when I asked in an email exchange for him to act more professionally toward me.

But this guy wasn’t just any run-of-the-mill troll. He was the sheriff’s campaign manager, Javier Gonzalez.

In what was not a shock to me, his boss soon joined in. He went on FOX11 News to describe my columnas to host Elex Michaelson as a “hit piece with no foundation” and complained that I had nothing positive to say about him. And just yesterday, Villanueva held a press conference to decry my articles and those of my colleague Alene Tchekmedyian as “trying to coincide … with the election cycle” to influence its outcome.

To quote a song from the ’80s band the Smiths: “Bigmouth strikes again.”

I shouldn’t have been surprised by any of the above. Villanueva has a well-deserved reputation as someone who delights in criticizing opponents — whether community activists, politicians or people protesting those killed by his deputies — as soft-on-crime dilettantes.

Listen: I’m not going to pretend that I’m a sober, stone-cold-serious voice on social media. I have been known to be snide — to put it charitably. (I’ve tweeted “In-N-Out is overrated” 346,765 times — so my editor insists! — among other things.) But I’m not the sheriff of the largest county in the US

And so I tell you, dear reader, that I was truly hoping to rise above all that when I asked Gonzalez to set up an interview with Villanueva. The original premise of my request was to talk about how Latino the LA sheriff’s department is today, how pro-law enforcement Latinos generally are and what that means for policing in Southern California and beyond — a phenomenon with important implications I don’t think politicians and activists consider enough.

Then Villanueva went on all kinds of self-sparked tangents: anti-Black dog whistles, resentment politics, digs against LA firefighters and “Latinx,” the admission that 80% of sheriff deputies are “far-right and conservative” and prone to believe in conspiracy theories.

Instead of pressing him on every single point, no matter how unfounded (more on that in a bit), I decided to just let Villanueva talk and unfurl his psyche for the world. The subsequent reaction caused a desmadre — a big ol’ ruckus — across Southern California.

Most of what I heard was positive and went along the lines of what Rick Felsher said via email. “You don’t even have to make a commentary on his crap,” wrote the Santa Ana resident. “You simply report it objectively. Villanueva continues to do a brilliant job of exhibiting to the world what a complete pendejo estúpido he truly is.”

But I kept thinking back to the part of our original one-hour interview when Villanueva claimed that a “silent majority” of Angelenos support his regime and will reelect their man this fall. And here’s the thing: I believe him — because I heard from them. And they’re about as silent as el sheriff.

There was the guy who advised me to “stay in my lane” and not write about Los Angeles County anymore because I’m an OC guy. The Latinos who accused me of being anti-Latino because I bashed the half-Puerto Rican Villanueva.

Quick aside: Such blind loyalty to ethnicity reminds me of a bitter joke we Mexicans say about ourselves anytime one of our own does something self-defeating: Por eso estamos como estamos. That’s why we are the way we are.

There were the fans of Villanueva who said I unfairly characterized the sheriff, even though much of what I printed were his words. verbatim.

And then there was my relative, whom I won’t name to save them the embarrassment, who texted that my columns made them like Villanueva more because of “his courage to speak up against issues most wouldn’t touch … like Black- on-Black crime and the laziness of second- and third-generation [Latinos] that want handouts.”

When Michaelson aired Villanueva’s comments on the station’s 7 pm broadcast for my immediate reaction, I blurted out that any insinuation that I was out to get Villanueva was “a total lie.” I didn’t see my columns as a hatchet job so much as a warning: to opponents whose hatred of Villanueva blinds them to what I truly believe is a “sharp mind” and to Villanueva himself, to check his ego and the “mind that could actually do good if its trollish id didn’t always feel there were scores to settle.”

But Villanueva was not of a mind to accept even such grudging praise. Because, as I argued, he’s like a Stetson-wearing Nixon. He collects grievances like a sneakerhead collects Air Jordans.

And it’s just not good to have someone like that in any elected position, let alone the one entrusted with law and order over LA County’s 10 million-plus residents.

The most legitimate criticisms of my columns — and ones I’m willing to accept, to a considerable degree — are these: Many good people wondered why I let Villanueva flatly state that the perpetrators of Asian American hate crimes are “overwhelming majority” Black. A report released last fall by the LA County Commission on Human Relations found that 19% of suspects identified in anti-Asian hate crimes were Black — far less than whites (42%) and Latinos (36%).

Activists asked why I also didn’t challenge his assertion that there were no clashes during 2020’s summer of racial reckoning between them and Villanueva’s deputies. Several people ended up suing Villanueva and his deputies over alleged excessive force, after all.

Mea culpa: I could’ve pushed back more than I did.

But going into the interview, for which I was promised only an hour that seemingly went by in minutes, I had to rip up my game plan in real time and choose a different approach once I realized what was transpiring.

It was far more valuable to let Villanueva go on and on rather than interrupt and make him clamp up or – worse – have him snap back à la his consigliere Gonzalez, and let our interview devolve into a quien-es-más-macho charade.

That’s the trap Villanueva wants anyone who dares question him to fall into — because that just lets him flex his anti-woke muscles.

At the end, I wanted there to be as little doubt as possible about what he believes, down to his bones.

Don’t say he didn’t tell you.

New Vehicle Sales Expected to Drop in the First Quarter, According to Edmunds