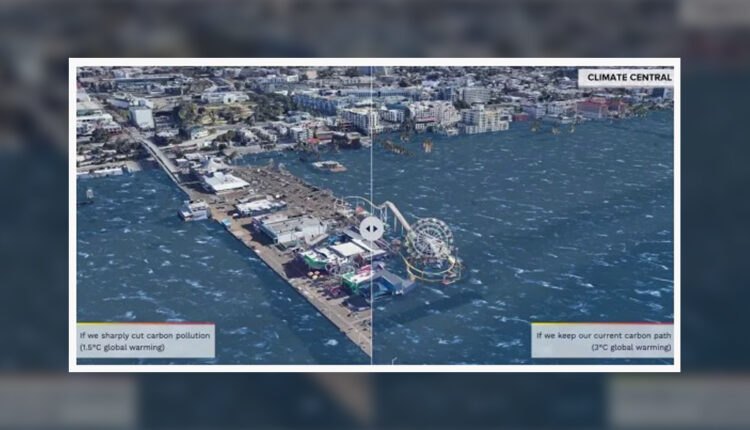 It’s hard to visualize the effects of climate change, but a new graph showing what the Santa Monica Pier might look like if temperatures keep rising helps put things in perspective.

Climate Central recently released a series of images showing the effects of climate change on popular travel destinations, including the Santa Monica Pier.

In less than a century, one of California’s most popular tourist attractions could be underwater due to rising sea levels.

However, Santa Monica is working to ensure that this nightmare scenario does not become a reality.

“The visualization recently created by Climate Central and reported by CNN accurately reflects the current climate crisis and the potential impact of sea level rise and coastal storms here in Santa Monica and in the future in coastal communities around the world,” Shannon Parry, said the city’s sustainability officer . “It’s worth noting that these models and visualizations reflect a worst-case scenario if climate change continues unabated. Here in Santa Monica, we are actively working to combat climate change and reduce our greenhouse gas emissions. The city has set itself the goal of being carbon neutral by 2050 or earlier, and we are well on our way to achieving that goal. Santa Monica emissions were 36% below 1990 levels in 2019. In 2020, during the COVID pandemic, Santa Monica emissions decreased another 37%. “

New research from Climate Central shows that under the current emissions path leading to global warming of 3 ° C, around 50 major cities around the world will have to build unprecedented defenses around the world or lose most of their populated areas to the incessant rise in sea levels .

The flood line could penetrate over land occupied by about 10% of the current world population, that is over 800 million people after a warming of 3 ° C.

The threats are global but centered on Asia, where megacity futures are at stake in four of the five most threatened nations.

China, India, Vietnam and Indonesia are among the five countries most at risk of long-term increases. They are also countries that added the most new coal burning capacity from 2015 to 2019.

In China, about 43 million people could be below the flood level after warming 3 ° C by the end of this century. China has benefited most from limiting warming, with around 50 million people on land at risk of multi-century sea level rise after warming by 3 ° C, but who would be safe if warming were limited to 1.5 ° C.

In Santa Monica, the pier deck could be at sea level or just underwater while the rest of the coastline is completely flooded.

The latest report instead focuses on the contrast between 3 ° C and 1.5 ° C scenarios, which correspond to a continuation of the current path towards a profound and immediate reduction in climate pollution and which will drop to around half of today’s annual emissions by 2030.